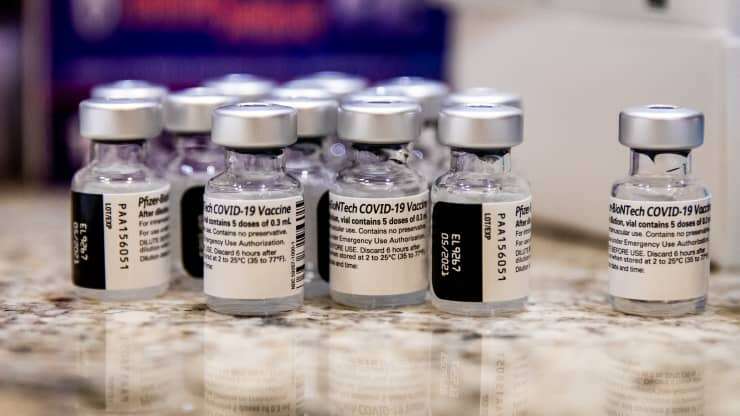 The United States has thrown away at least 15.1 million doses of Covid-19 vaccines since March 1, according to government data obtained by NBC News — a number that is far larger than previously known and is still likely an undercount.

The data released by the CDC is self-reported by pharmacies, states and other vaccine providers. It is not comprehensive — missing some states and federal providers — and it does not include the reason doses had to be thrown away. The number of discarded doses is still a small fraction of the total vaccines administered in the U.S.

In general, there are a number of reasons why vaccination sites may have to mark doses as wasted, from a cracked vial or an error diluting the vaccine to a freezer malfunction to more doses in a vial than people who want them. A wastage report can also happen when a vial contains fewer doses than it should.

The data on wasted doses comes as the more contagious delta variant spreads rapidly across the United States, adding fresh urgency to the effort to vaccinate as many people as possible and spurring a plan to begin offering booster shots to those who were already vaccinated — even as many nations around the world have vaccinated few, if any, of their residents.

“It’s really tragic that we have a situation where vaccines are being wasted while lots of African countries have not had even 5 percent of their populations vaccinated,” said Sharifah Sekalala, an associate professor of global health law at England’s University of Warwick, who studies inequalities in infectious diseases.

“A lot of the global south is unvaccinated. The African continent is still below 10 percent, and that’s just a huge inequality and it’s really problematic.”

CDC spokeswoman Kristen Nordlund said in an email that the share of Covid vaccines wasted “remains extremely low, which is evidence of the strong partnership among the federal government, jurisdictions, and vaccine providers to get as many people vaccinated as possible while reducing vaccine wastage across the system.”

Nordland added, “As access to Covid-19 vaccine has increased, it is important for providers to not miss any opportunity to vaccinate every eligible person who presents at vaccine clinics, even if it may increase the likelihood of leaving unused doses in a vial.”

A CVS spokesman made a similar point, writing in an email: “While we regret having to dispose of any vaccine, we’re extremely proud of our store employees who’ve helped administer more than 30 million doses. When given the option of potentially saving a life or slightly improving our reported waste figures, we’ll always choose the former.”

Walgreens, Walmart and Rite Aid did not immediately provide comment. “Our goal has always been ensuring every dose of vaccine is used,” Walgreens spokesperson Kris Lathan told Kaiser Health News in May.

The number of doses that went to waste is a small fraction of the more than 438 million doses that were distributed in the country as of Tuesday and the 111.7 million additional doses the U.S. had given to other countries as of Aug. 3.

Demand for vaccines in the U.S. rose in August as cases and hospitalizations surged due to the delta variant. Still, the U.S. wasted at least 3.8 million doses in August alone, the data shows.

States, pharmacies and other vaccine providers also reported at least 4.4 million wasted doses to the CDC in June and 4.7 million in July — more than in March, April and May combined.

No state health department came close to the number of doses wasted by pharmacy chains, but four reported over 200,000 wasted doses each. Texas led in reports of vaccine waste by states, with 517,746 wasted doses, North Carolina reported 285,126, Pennsylvania reported 244,214 and Oklahoma reported 226,163.

Lara Anton, a spokeswoman for the Texas Department of State Health Services, said the state “instructed vaccine providers to prioritize vaccinating people when they came in to get vaccinated rather than waiting until they found enough people to use every dose in the vial before opening it,” which can lead to wasted doses. Anton also mentioned extreme weather in May as contributing to Texas’ waste numbers.

Representatives for the North Carolina, Pennsylvania and Oklahoma health departments did not immediately comment.

Last month, the Food and Drug Administration authorized booster shots for people who are immunocompromised because their bodies may not respond to the initial vaccine regimen. The Biden administration has also announced a plan, pending FDA and CDC signoff, to offer booster shots to all Americans eight months after their last dose in response to evidence of waning immunity.

Those moves sparked debate about whether it was moral to offer Americans extra protection when so many people around the world haven’t received even a single Covid vaccine shot.

But the new data showed that the U.S. has wasted far more vaccine doses than many poorer countries have for their entire population. For example, the country of Georgia, a coronavirus hot spot, has administered just 1.1 million vaccine doses for its population of 4.9 million. Nepal, which has been ravaged by the delta variant, has administered just 9.7 million doses for its population of 30.4 million.

“It’s an equity issue,” said Tim Doran, professor of health policy at the United Kingdom’s University of York. “You’ve got a very wealthy country with good access to vaccines essentially throwing vaccine away, and a lot of vaccine away, and you’ve got other countries and other communities within those countries who would really require it, who were having to wait and aren’t getting access to vaccine and that’s making them susceptible whilst they are awaiting vaccination.”

Sekalala said the U.S. wasting so many doses was “inevitable under the model” in which wealthy countries bought large quantities of vaccines for themselves, only thinking about donating them to poorer countries later.

“It’s a failure of the current system where rich countries buy their individual batches of vaccines, and then have to think about what’s going to happen if they don’t use them,” she said. “This led to an over-purchase, with people buying up supplies that they didn’t need or weren’t able to use.”

One contributing factor to vaccine waste is the way the vaccines are packaged. Most vaccines for other illnesses come in single-dose vials. But, depending on the equipment used to draw a dose, Moderna’s Covid vaccine has up to 15 doses in a vial, while Pfizer’s has up to six and Johnson & Johnson’s has up to five.

Once a vial is punctured — for example, if a customer requests the vaccine at a retail pharmacy — the clock starts ticking. A vial of Moderna’s vaccine has to be discarded 12 hours after it’s punctured, while Pfizer’s and Johnson & Johnson’s have to be discarded after six hours.

The high number of doses in each vial and the relatively short timeframe for using a vial once it’s been punctured likely contributed to unused doses going to waste.

The data released Tuesday is more detailed and complete than data the CDC released in April, when a Kaiser Health News investigation found that the country wasted nearly 200,000 Covid vaccine doses from December 2020 through March 2021.

A separate investigation by The New York Times found about 1 million wasted doses across 10 states from December through July.

The more detailed data suggests that the CDC now has a better picture of how much is being wasted and where than it did earlier in the vaccination program. Still, seven states are missing from the newly released data entirely: Arkansas, Connecticut, Louisiana, Maine, Nevada, Ohio and Oregon.

Another state, Michigan, has reported just 12 wasted doses to the CDC since March 1.

Several vaccine providers reported the waste of thousands of doses to the CDC in a single report. But overall, the newly released data shows that vaccine waste was a slow, steady trickle rather than a flood — the most common report in the data was just four doses wasted at a time.

Also missing from the CDC’s data are doses wasted by federal agencies that are administering the vaccines, including the Department of Defense, the Bureau of Prisons, the Veterans Health Administration and the Indian Health Service.

More vaccine waste data is held in Tiberius, a system run by the Department of Health and Human Services, but officials have yet to release it. The data released Tuesday came from the CDC’s Vaccine Tracking System, or VTrckS, which pulls data from state and local immunization registries.