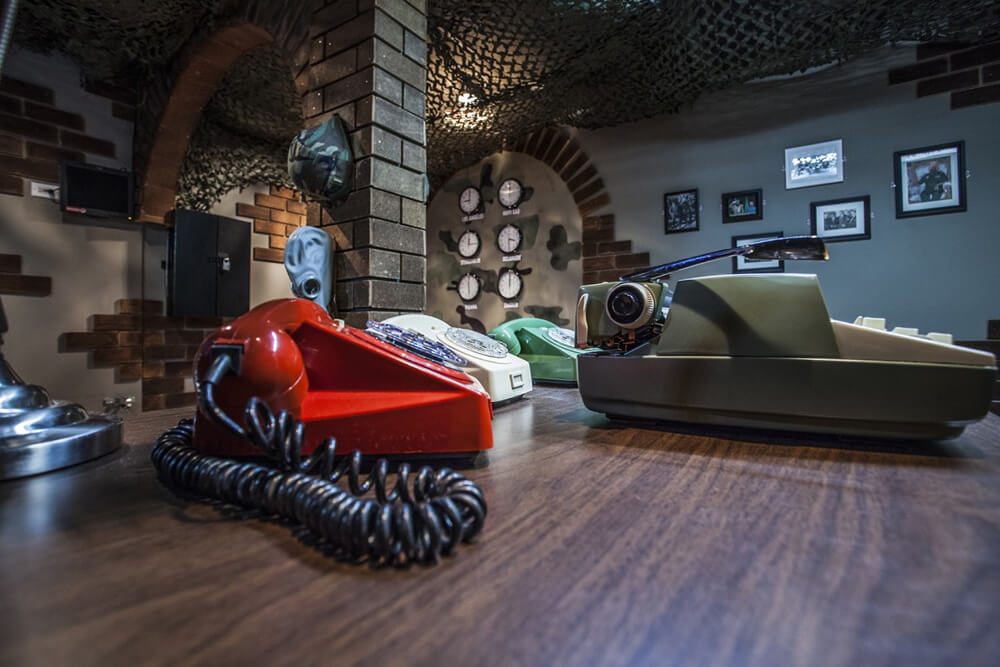 Escape rooms are fun activities that can challenge a group and are a great way to bond.

However, tons of escape rooms have themes such as “spooky,” “scary,” or “haunted” escapes (especially around Halloween). Those themes don’t work as well for those of us who aren’t into the scary stuff, families with young ones, or work groups trying out an activity that works for everyone.

Luckily, there are many other common and popular themes for escape rooms. From sci-fi to sorcery, we’ll break down the top 10 less spooky escape rooms that you should try.

We’ve selected some specific escape rooms from across the United States. But you can search for each theme using the Morty app, so you can find a room with a theme you’re interested in near you today.

This escape room is perfect for families and anyone wanting to feel like a kid. The premise of the challenge is that you’re just about ready to start your summer vacation, but you have one final assignment: a group project. There are a ton of puzzles based on games and things many of us do as kids.

This particular escape room is hosted by The Escape Game, which has locations in several cities such as Las Vegas, NV, and Irvine, CA. They also have several virtual escape rooms on offer, so you don’t need to travel if you want to enjoy additional options.

Tiki Island is an island adventure-themed escape room by Escape The Netherworld. With this escape room, you are in your former archaeology professor’s beach house. Suddenly, the outside world is thrown into chaos as Hawaiian gods battle each other with their physical and supernatural skills.

The beach house is safe for now, but if you don’t solve the many puzzles that can help you thwart the powers of evil, the storm will wash the house right into a pack of hungry sharks.

The Fun House and Fun House-KIDS are by Cross Roads Escape Games are the ideal escape rooms for those hoping for a family-friendly activity. The company recommends the kid version of The Fun House for those who plan to bring children under the age of 13.

In the kid’s Fun House, the challenges are slightly less complicated and have fewer puzzles. The room itself focuses on the idea of tricks and illusions, and your goal is to become the greatest magician by solving each challenge.

Presented by Mind Twist, this room is located right on the Las Vegas Strip. Within the challenge, you find yourself in a bed and breakfast in the United Kingdom right near where Lewis Carrol wrote the famous Alice in Wonderland. From this moment on, you need to solve puzzles and complete challenges to make it through Alice’s twisted, wacky dreams before the manager of the bed and breakfast comes to wake you up.

This room has a sci-fi theme focusing on robots. The location of the escape room, The Nemesis Club, is hidden. You’ll need to enter the Soda Jerk, an elegant ice cream parlor, where you can then find a secret door to go into the real Nemesis Club featuring the escape room challenge.

The story is as follows: A robot at The Experimental Virtual Intelligence Laboratory has somehow managed to power itself on. You need to break in and stop the robot before it can charge completely and wreak havoc.

In Red Fox Escape’s The Heist, the largest diamond in the world has recently moved to a private art gallery in Back Bay. Your group’s goal is to get in, steal the diamond, and get out without getting caught. If you succeed, you and your fellow thieves will be rich. If you fail, you’ll be caught, handcuffed, and sent off to prison.

This is an excellent escape room for those who enjoy architectural challenges and puzzles based on security and planning.

Save the Queen (Chicago, IL)

Save the Queen is a medieval-themed escape room. You and your group play the role of members of the royal court. In the beginning, you, the entire royal court, and the queen are all captured by a group of knights who have planned to overthrow the queen.

As a loyal servant to the queen, your goal is to find a way out of the cell the evil knights have put you in, expose them as traitors, and (quite literally) save the queen.

Another room from The Escape Game, Ruins: Forbidden Treasure is a difficult adventure-themed challenge.

While flying over an open jungle, you and your group suddenly find yourselves grounded and stranded. You look before you and see the ruins of an ancient, famous temple said to contain massive amounts of treasure. If you can make your way through the temple, you’ll be able to get your hands on the riches and become known as famous adventurers.

In this challenge presented by The Escape Game, you take on the role of a Special Ops field agent. You’ve been ordered to inspect the area’s local market for suspicious activity. Once you arrive, you can tell things aren’t right. An unknown twist hits you and you need to find your way out in time.

This challenge is great for those interested in solving specific mysteries or taking on the role of a spy or agent.

Presented by 5 Wits, this escape room comes with some pretty stunning visuals and special effects.

In this scenario, you are a prisoner desperate for escape inside a submarine. The captain says they can offer you freedom if only you can venture to the bottom of the ocean floor (20,000 leagues down) and find a hidden treasure. Your air will run out in one hour, so you need to find the treasure, retrieve it, and bring it back to the submarine within that time.

5 Wits has multiple locations and escape rooms available, so check out their website for even more options!

Presented by Rabbit Hole Recreation Services, this escape room features the wonder of time travel and the peril of paradoxes.

Someone named The Architect has been working on a time-traveling machine and needs you and your group’s help to complete it. A great storm is approaching and it’s the one thing you need to charge up the machine. You’ll either use the energy of the storm by solving riddles, challenges, and puzzles or you will run out of time and become lost in the vortex.

Locurio describes this escape room as “an enchanted escape room adventure.” Given the story, we’d agree with that summary.

There have been rumors swirling about a mysterious book collection held by someone known only as Jak. The rumors say Jak hopes to add something to their collection and needs curious adventurers to retrieve a “treasure.” No one knows what it could be, only that it lies hidden in a strange and secret library. With little information given to you, you’ll need to work together to discover all of the secrets of this odd library and its hidden treasure.

Species Unknown is an alien-themed escape room in which you and your research team are the first to find signs of extraterrestrial life. You quickly realize that the alien life form you’ve discovered is not as friendly to you as you are to them. You’ll need to learn more about this extraterrestrial species to find a way out of the situation and save your own life and the lives of everyone in your group.

The Agency comes from Escape The Room. In this game, you play as a secret agent who must complete their mission before time is up. You have very little information about your mission, so you’ll have to learn things as you go to finish things correctly and report back safely. The threat of failure is massive, as The Agency will erase your existence if you fail to complete your mission.

If you’re an aspiring spy who loves to figure out physical and mental challenges, this is the perfect escape room.

Escape rooms don’t need to be scary to be fun. In fact, many of the most popular escape rooms we found didn’t adopt a scary theme.

Whether you avoid the spooky things in life (no shame, lots of us do!) or you want to try something different, there are tons of options for less spooky escape rooms. We found all of these escape room options using the Morty app. Download and browse to find the non-scary escape room fun you’ve been looking for!