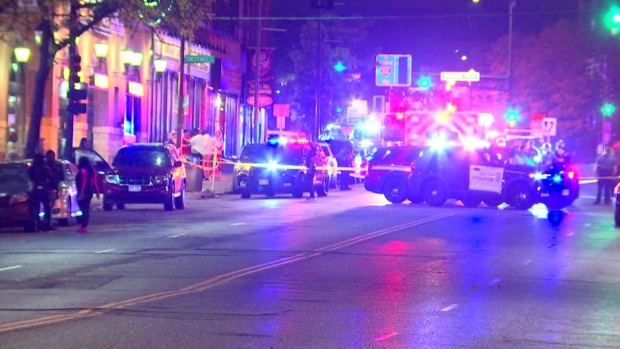 Police say three men have been arrested in connection with an early morning shootout at a St. Paul bar that left one woman dead and 14 people injured.

WCCO does not typically name suspects until prosecutors charge them with a crime.

Police would like anyone who has information about the shooting to call 651-266-5650.

One woman who police said was in her 20s died. Fourteen other people were taken to area hospitals for treatment. All of them are expected to survive. Good Samaritans worked with police to help victims while paramedics made it to the scene.

“I can only describe it as hellish,” St. Paul police spokesperson Steve Linders said. “I think about the young woman who died. One minute she’s having a good time, the next minute she’s lying in her friends’ arms who are trying to save her life, and she didn’t make it. I can’t think of anything worse.”

Police did not say whether the three hospitalized suspects were part of the original 14 people wounded in the chaos.

Regions Hospital told WCCO it received five victims from the shooting. Two were treated and released, two are in fair condition and one is seriously wounded.

But investigators said preliminary information indicates there were several shooters. A motive has yet to be determined.

“My heart breaks for the woman who was killed, her loved ones and everyone else who was in that bar this morning,” Axtell said in an earlier statement. “In an instant, they found themselves caught in a hellish situation. I want them to know that we have the best investigators in the country, and we won’t stop until we find the people responsible for this madness. We will do our part to hold them accountable.”

Later, Axtell tweeted that he spoke with the family of the woman who was killed and they are “absolutely devastated.”
“We will bring justice to the victims,” he promised at the time.

“Our community is devastated by the shocking scenes from last night,” Carter said. “As our Saint Paul officers work to bring those responsible for these senseless acts into custody, our work to build more proactive and comprehensive public safety strategies is more urgent than ever. We will never accept violence in our community.”

“Minnesota is keeping in our hearts the family of the young woman killed and the 14 others injured, and the St. Paul neighborhood reeling from this senseless gun violence,” Walz said. “We’re working in close coordination with local law enforcement as they apprehend those responsible.”

Investigators have not yet publicly identified the woman who died. The Ramsey County Medical Examiner’s Office will conduct an autopsy and release her name and the exact cause of of her death.