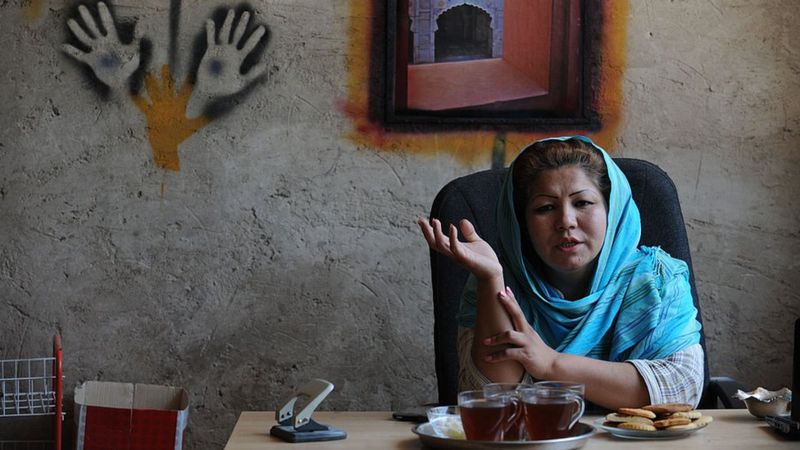 More than 80 percent of the world’s illicit opium and heroin come from Afghanistan. With years of war and lack of law and order, international criminal gangs have expanded their production in the country. But because of the uncertainty, poverty and drug addiction have also increased dramatically inside the country.

An Afghan woman, is working to bring drug addicts back from the world of drugs and rehabilitate them in society. After his brother suddenly became addicted to drugs, he set up a center for it.

Layla’s brother Hakim’s wife first told him that her brother had become addicted. He was stunned by such sudden news. The whole family was lost because of Hakim’s addiction.

He said he tried to keep Hakim’s addiction a secret from his in-laws.

“It’s a shame. My reputation would have been tarnished if it had been known. But then Hakim’s wife called another day and said that the situation was worse – Hakim was taking drugs at home now.”

Laila Haidari ran to her brother’s house. Their three cute sweet girls. He saw his cousins, including his brother, taking drugs in front of the children.

“As kids’ grandparents, I felt it was my responsibility to do something. Because I want kids to grow up healthy and beautiful. They have a better future,” he said.

After that was to get the kids out of it. So he kicked his brother out of the house. But he was living under a notorious bridge in Kabul where many drug addicts lived.

“His wife was not at all happy to let him out of the house. Because he was alone at home. He called me and started crying. He said to find the magistrate. Going under that bridge, I saw about four thousand drug addicts there. Everyone seemed half-dead. It was thin, dirty clothes. I thought these people also have raw wives and children. They must be worried about them too. ”

Laila Haidari said she had never seen such a tragic scene in her life. It was as if people were living in hell. The way they are taking opium and heroin, it looks like they are burning themselves in the fire of hell. If you look into their eyes, you can see that they have lost everything and become destitute.

Laila Haidari could not look him in the face when she found her brother. He was the eldest child of their family. As a result, everyone looked at him like a father. Laila then decided that she would do something to bring her brother and others who were addicted back to normal life.

Heroin is a very strong Addiction

It is derived from the opium tree. It is cultivated in Central Asia. As a result, opium has been cultivated in the region for centuries.

Drug addiction is also a long-standing problem in Afghanistan. But since the United States and its allies invaded Afghanistan in 2001, heroin cultivation and drug addiction have increased dramatically.

The Afghan government and its international allies have repeatedly campaigned against poppy cultivation. But due to the war, there is no rule of law in a wide area and opium cultivation has increased there. Because the main source of income for the militants is the cultivation and trafficking of opium.

“It’s not just our problem. It’s a global problem. International criminal gangs are dealing in this drug. You see, opium farmers are still very poor. They don’t even have warm shoes to wear in the winter. They grow opium,” said Layla Haidari. “They are not making money. People are forcing them to cultivate these with guns in their heads. This is how they survive after eating somehow.”

Illegal drugs are a big problem all over the world. But Afghanistan has a very favorable environment for this – war, uncertainty, unemployment, mental and social instability and poverty. Also drugs are very cheap there.

Laila gave her brother a book on how to get out of drug addiction. Brother Hakim was released from addiction. But when Laila wanted to help more people, she set up a rehabilitation center in 2010.

He has spent all his savings on it. He also got help from the local people. This center is known as Mother’s Camp.

The center has a coffee shop. The money earned from this is spent to run the rehabilitation center.

He said there were about 30 to 40 people at the center before the coronavirus epidemic. This number was more than 60 in winter.

“There was a coffee shop here to raise money. The government didn’t pay us. I also spent money to get some girls to go to school. But after Kovid, the income from this coffee shop has dropped by 90 per cent. There are still some patients in the camp.” “Hopefully soon we can help some more people,” he said.

Laila Haidari became a well-known figure by establishing the only private rehabilitation center in Kabul. But just as it took a lot of courage to do this, it also required a strong attitude to stick to it.

Layla got married at a very young Age

He was only 12 years old. The husband was much older than she was. He was a very pious mullah. This world did not survive. After that he started his own business. In the meantime, he took the initiative to establish a rehabilitation center. The militants then threatened to kill him. As a result, his journey was not an easy one.

“I was a child at the time of the marriage. I was still not physically and mentally ready to be with a man. Whenever my husband slept with me, it was like sexual abuse. Because I could not feel anything like an adult woman,” she said.

“He was also very strict. He had different views on everything. The family I came from was very generous and open-minded. He forced me to wear a black burqa like Saudi women. The whole body was covered without eyes. It was very hot in summer. My family never told me to wear it. ”

“I hated sleeping with her. So I divorced her. It was a big blow for the children. But I hope they understand why I had to leave.”