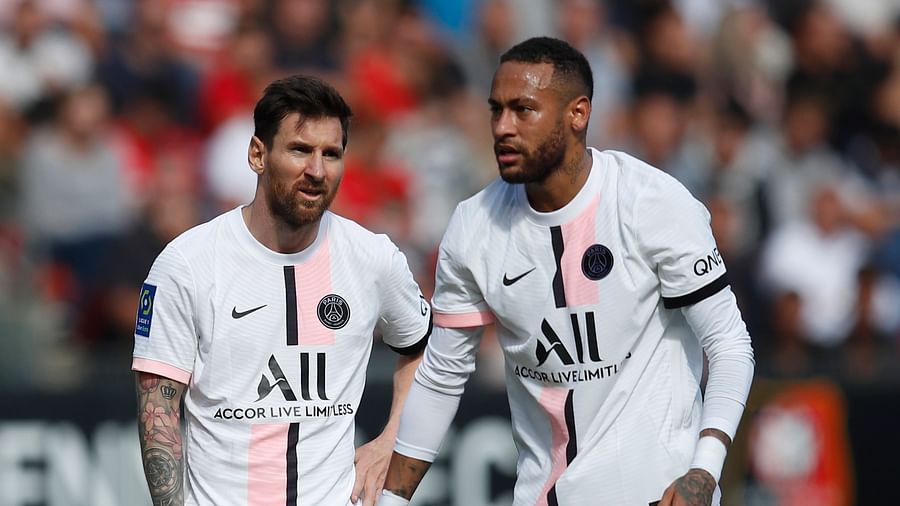 After that match against City in the Champions League, PSG has come down against Ren in the league today. Messi, Neymar, Killian Mbappe, Anhel Di Maria, Marco Verratti … PSG coach Mauricio Pachettino has brought down the star-studded team. But what happened to Ren’s field in the end? PSG lost 2-0. PSG Rain could not put a single shot in the goal post in the whole match!

This is not the PSG’s first defeat of the season, however, as Pachettino’s side lost 1-0 to Lille in the opening match of the season on August 1 at the Trophy de Champione. But Messi has not yet joined the PSG.

Messi, Neymar, Mbappe, none of them have played very badly today. Mbappe missed several chances, but he was the most active in PSG’s attack throughout the match.

Messi’s great free-kick hit the bar. In the first half, Messi and Neymar combined to make Mbappe a great through three or four times, in which the French forward could not take advantage of all the great chances to score. One of Mbappe’s goals in the second half was canceled offside.

But it has become clear that PSG coach Pachettino has not yet figured out how to balance the team with Messi-Neymar-Mbappe and Di Maria in the XI.

Questions may also arise about the player change of the Argentine coach! When the team was trailing 2-0, leaving Messi alone, Mbappe took the left edge from the front of the opponent’s goal and picked up Neymar and Veratti Pachettino! 15 minutes left in the match!

Once again, the failure of PSG’s defense to get the ball out of their own half in the face of pressure from the opposition. It’s not that Rennes done too much to stop PSG. What Bruga or Man City have done in the Champions League before, Rennes coach Bruno Genesio has played the same tactics for the team today.

Which strategy? PSG’s dream may be to have an attacker, a midfielder like Veratti, but they can only be terrifying when the ball goes to their feet. Like Bruga and Man City, Rennes has blocked the way for the ball to go from midfield and attack to defense under great pressure. The weakness of those who get the ball in the face of the pressure of the opponent in the defense of PSG and in the middle, that Kimpembe, Idrisa sang, Rene jumped into the team as soon as the ball went to the judges.

In the first minute of the match, PSG was helpless in front of the suffocating press of Ren going to the box of PSG. After Messi and Neymar came down and took control of the game, the PSGO created several opportunities. Mbapp’s chemistry with Messi is quite noticeable at this time.

Mbappe got the goalkeeper alone in the 25th minute with a great throw by Messi, but the French star’s shot from a few yards went wide of the bar. In the 31st minute, Messi’s bow-curved free-kick returned to the bar. The 34-year-old Argentine forward had to come back even though he came very close to the first goal in the PSG jersey in the league.

At that time it seemed that PSG’s goal was just a matter of time. But the opposite! In the 45th minute, Rene scored the opposite goal in the counter attack. Suleimana, who is quite noticeable in Ren’s number ten jersey on the left side, made a great cross in the box, Labord PSU left-back Nuno Mendes, who came up in the box and ran, got the ball into the net.

PSG, which was lagging behind at the break, pushed again in the second half. This time too the source counter-attacked. Labord ran to the right end of the counter-attack, pointing to the fact that the PSG team was out of balance. Going to the goal line, Labord crossed the box low, and Tait in the box wrapped it in the net.

After scoring two goals, Rennes became more defensive, and as soon as the ball landed at the feet of Messi and Neymar, two opposing defenders began to surround him. PSG became more helpless at that time. In the 62nd minute, Ren’s Suleiman’s bullet speed shot into the PSG bar.

The decision of VAR made PSG more helpless. Mbappe, who wasted many chances in the match, wrapped the ball in the net with extraordinary skill in 6 minutes. Messi gave the ball to Mbappe from midfield. Mbappe enters with the ball in front of the box with Di Maria, aiming for Mbappe’s run and increasing through Di Maria. Through that, the opponent hid the defender, fooled the goalkeeper and wrapped the ball in the net with a great finish. But VAR said, Messi was offside at the time of passing to Mbappe!

PSG got another free-kick in the 64th minute, Messi’s shot again. This time it didn’t hit the bar, but the wind blew the post away. Then PSG coach Pachettino’s two shocking changes. Pachettino may have to explain at a press conference today why the players switched three, but why Idrisa picked up Neymar and Verratti alongside Gerra. Instead of these three, Vinaldam, Arera and Icardi came on the field for PSG.

Messi was then left alone in the area in front of Rennes’s box, and he was surrounded by Rennes in counter-attack tactics. Pachettino moved Mbappe from the striker to the left wing, reducing Mbappe’s power. PSG then became toothless even in the allotted time and six minutes of added time.

On the other hand, there is a fear that PSG will score another goal. In the 62nd minute, Hakimi fouled Ren’s Labord in his own box – the referee blew the whistle for Ren’s penalty. But as can be seen in the VAR, it seemed to be Hakimi’s foot. The penalty is canceled.

But where is the more benefit of PSG! Ren’s rather domination continued. After PSG came under Qatari ownership in 2011, the team that has lost the most PSG 5 times in the league, along with Leon, rose to the top of the list.