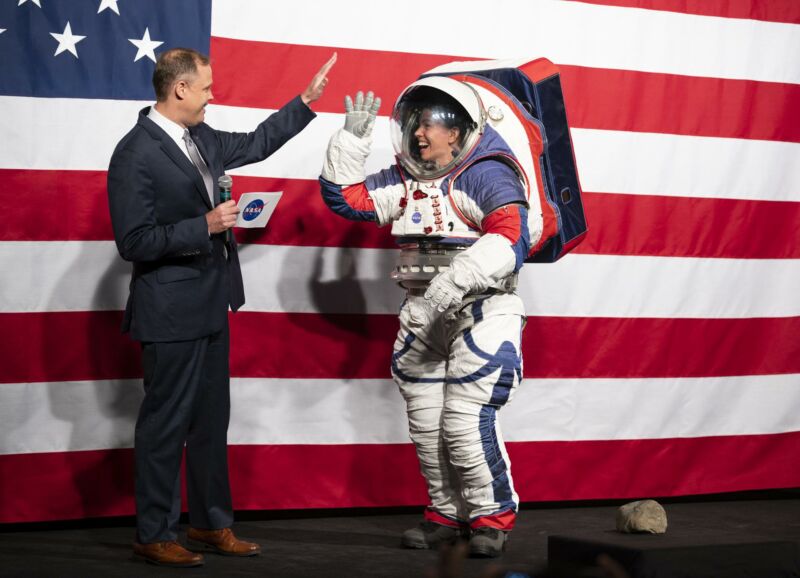 This week NASA’s Johnson Space Center issued a call to industry for new spacesuits. The space agency’s existing suits are decades old, and new ones are needed both for the International Space Station as well as Artemis missions to the lunar surface later this decade.

“Our undertakings in low-Earth orbit, at the Moon and beyond have evolved and are calling for innovative technology,” said NASA Deputy Administrator Pam Melroy. “The next astronauts on the Moon—including the first woman—will be kept safe in revolutionary spacesuits that fit better and enable greater human exploration than ever before.”

The announcement did not garner a whole lot of attention, but it is significant for two reasons. First of all, with this “request for proposals,” NASA may finally solve the problem of finding its next-generation spacesuits, which has vexed the agency for the last 14 years and cost hundreds of millions of dollars. Additionally, with this new approach to buying spacesuits, NASA is further signaling its intent in a more commercial procurement process. It will be essentially renting the suits from industry, not building them in-house at a far greater expense.

A brief history of futility

In August NASA Inspector General Paul Martin published an exhaustive review of NASA ‘s efforts to develop a replacement for its Extravehicular Mobility Units, or EMUs. This is both the spacesuit and hardware that connects the suit to a spacecraft. The EMUs currently being used on orbit were designed 45 years ago for the space shuttle program, and they are in a constant state of repair.

NASA has undertaken several different programs over the previous 14 years, generally led by a NASA field center, to develop a new generation of spacesuits. NASA has spent a total of $420 million during that time on various spacesuit efforts, but this has yielded limited results. After all of this work, any new spacesuits will not be ready for a Moon landing in 2024.

“A flight-ready suit remains years away from completion,” Martin wrote in his August report. “NASA officials expect to spend over $1 billion on design, testing, qualification, and development efforts before two flight-ready suits are available for use.”

Until earlier this year, NASA’s existing plan was to build six “xEMU” suits with contractor and vendor support and then issue a contract for the production of additional suits. (These were the “Artemis suits” that appeared at a gaudy NASA headquarters event in 2019, which, in hindsight, was more style than substance.) But all of that changed in April, when NASA announced that it was considering simply buying spacesuits from private industry.

Following the April statement, NASA issued a draft request for proposals in July, which offered a stronger signal that it may no longer build its own spacesuits.

In an interview with Ars after this draft request came out, one of the prospective bidders said it was clear that NASA was seeking to purchase suits rather than make them. “Like we have seen with spacecraft and rockets, I think where we’re going is a more commercial approach to spacesuits,” said Patty Stoll, president of space systems at ILC Dover. “There will be one turnkey solution from industry.”

And now, with the new industry request, NASA has done that. Bidders can use the technology NASA developed for xEMU in its proposals, or they can use their own designs, the document states. The suits must be able to meet a variety of requirements, including up to six spacewalks on the lunar surface during initial Artemis Moon missions. They must also be made of materials such that less than 100 grams of lunar regolith is brought back into the “cabin environment” after each spacewalk on the Moon. NASA plans to award a contract by next April.

This represents a fairly bold bet on industry. Previously, NASA has used fixed-price contracting to purchase cargo and crew services to the International Space Station. It also intends to buy lunar landing services in a similar manner and now seeks to extend this more purely commercial approach to spacesuits as well.

The agency really seems to be leaning into this approach. “NASA’s investment in commercial spacesuits is another way that we are fostering a new lunar economy with private partners,” Melroy said. “Similar to our partnerships in low-Earth orbit, this endeavor will create jobs and help fuel an active economy at the Moon.”