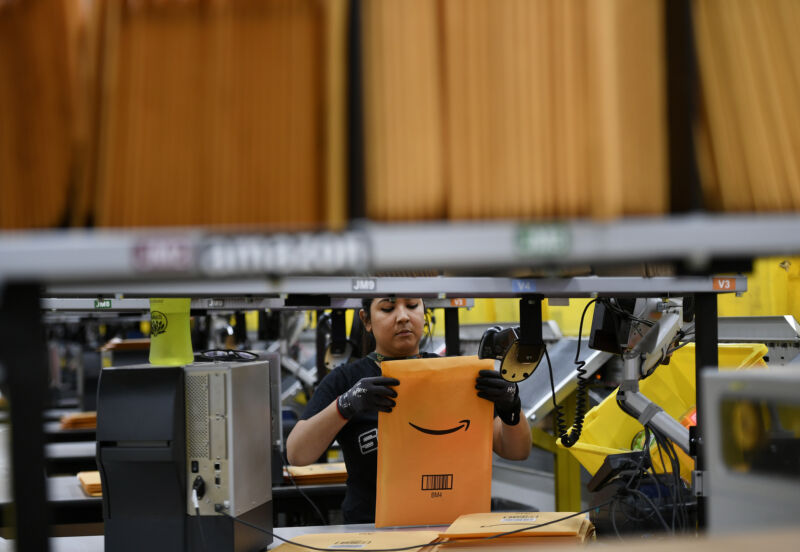 As Amazon struggles to staff its warehouses, it’s joining other large employers by offering to pay for college tuition in an attempt to attract and retain hourly employees.

The e-commerce giant announced Thursday that it would be broadening its education benefits by offering more than 750,000 employees the opportunity to attend college or finish high school for free. Employees only have to work at the company for 90 days to be eligible, and if they leave, they do not have to reimburse Amazon for any tuition or fees paid during their time with the company.

Notably, it’s not a reimbursement program—Amazon is paying tuition and fees up front so employees don’t have to dip into savings to enroll. The company expects to roll out the new benefits in January. In addition to bachelor’s and associate’s degrees and GEDs, the program will cover English as a second language certifications. Amazon also announced skill training and apprenticeship programs for entry-level employees working in AWS and other IT positions. So long as an employee works for Amazon, they’ll be able to use the benefit, potentially earning multiple degrees or certifications if they so choose.

Full-time employees are eligible for the fully subsidized tuition, while part-time workers logging as few as 20 hours per week will receive half the benefit. Though the company still has details to work out, it says that employees can use the benefit at “hundreds of education partners across the country.” Workers may be limited in terms of which degree programs they could apply to, and the programs may vary by region. Ardine Williams, the company’s vice president of workforce development, told The Wall Street Journal that she expects the company will subsidize degrees in technology, engineering, and health care. The expanded benefit goes well beyond what Amazon previously offered—95 percent of the cost of an associate’s degree or other certification.

One potential hitch could be scheduling, though Amazon says that it will provide flexible work schedules for students accommodate both school and work.
Advertisement

In total, Amazon anticipates the programs will cost $1.2 billion by 2025. Last year, the company made $21.3 billion in profit on $386 billion in revenue. Other companies like Walmart, Target, Chipotle, and JBS, a meat processor, offer comparable tuition subsidy programs, according to The Wall Street Journal.
Retention strategy

The move comes as Amazon has encountered high turnover at its front-line operations, particularly its warehouses. Since the pandemic began, Amazon says that it has hired 400,000 new workers who are eligible for the perk. Some of that has come as a result of expanded operations, but much of it is the result of people quitting. Among hourly employees, the turnover rate is 3 percent per week or about 150 percent per year, according to a New York Times investigation. In other words, in a single year, Amazon has to hire the equivalent of one-and-a-half times its entire hourly staff.

The education benefit may help lower that rate somewhat, Chris O’Leary, a senior economist at the WE Upjohn Institute for Employment Research, told The Wall Street Journal. “They might be able to get enough productive months or years out of somebody to make it worth the investment.”

The economic recovery has driven a hiring boom that has left workers in high demand. Increased wages have helped employers staff up to some extent, but that hasn’t tamped workers’ desires to advance in their careers, not simply get paid a bit more. (Still, don’t discount the financial motivation—people who finish some college make around 20 percent more than those with only a high school diploma, and those who have a bachelor’s earn about 80 percent more.)

Education benefits may help attract employees who are more willing to endure working conditions in Amazon’s warehouses. Workers are tracked as they complete tasks around the warehouse and pushed to finish them faster. That has led to heightened injury rates, according to one investigation, and instances where workers say they’ve skipped breaks to stay on top of their tasks.

California’s legislature has taken up the issue with a bill that aims to limit the use of algorithmic monitoring and quotas that can lead to unsafe conditions. The legislation would require companies to disclose productivity quotas to government agencies and employees alike, and it would forbid employers from establishing quotas that prevent workers from taking legally mandated breaks or skipping trips to the bathroom.