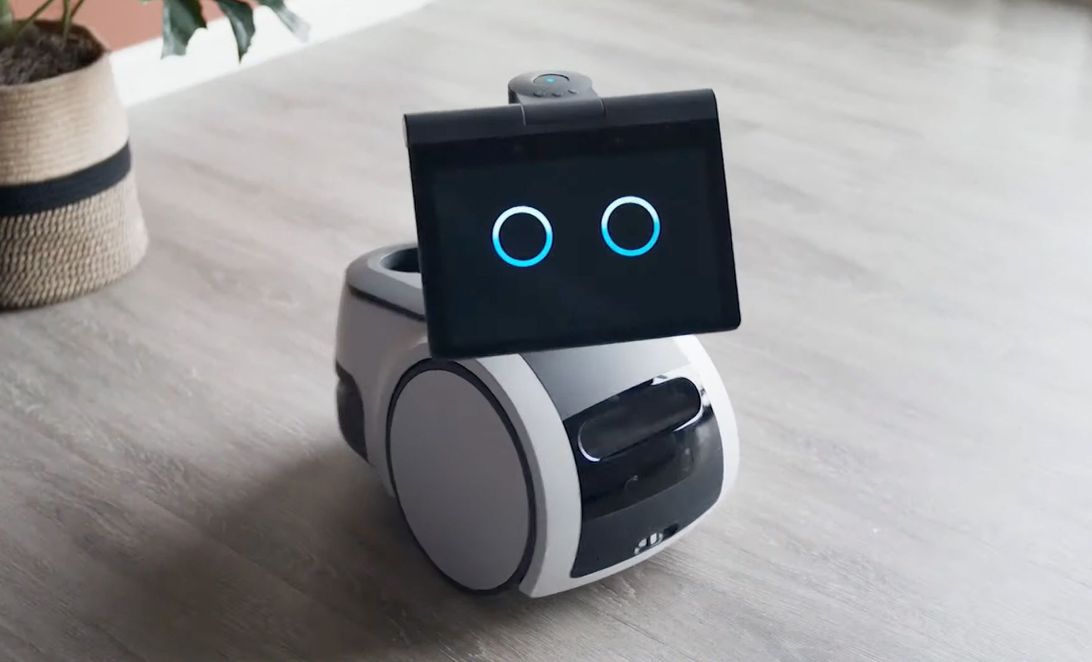 The idea of a domestic droid rolling around your house is fun, but the bot can scoop up oodles of personal data.

Amazon’s new robot is designed to zip around your house and serve as a faithful watchdroid. Named Astro, the bot will keep an eye on an aging family member and warn you if the stove is inadvertently left on. You’ll never have to worry about the bot’s focus; Astro can’t be distracted by a big steak.

With big round blinking eyes, Astro is reminiscent of Pixar’s Wall-E and just as cute. But privacy experts say consumers need to be aware that those eyes might not be real but they’ll always be watching.

“One of my big fears about this new wave of technology that [Amazon has] unleashed this week is that it will introduce more full-scale data harvesting,” says Matthew Guariglia, a policy analyst for the Electronic Frontier Foundation. “Who knows what data they could harvest from a robot that travels around your home?”

Saving the showstopper until the end of its hour-long fall product event, Amazon took the wraps off Astro on Tuesday. The robot, available by invite only for the moment, costs $1,000. The price will jump to $1,450 when it’s released more broadly.

Amazon says the smart home robot, a sort of Alexa on wheels, can monitor security, keep tabs on young family members and be there for whatever you might need Alexa for, like voice control of your lights. The bot is operated via an app that also receives Astro’s alerts. The app is used as well to drive the robot around and see what it sees.

While Astro serves as a test of whether we want robots wheeling around our homes, it’s also another example of a product from Amazon that stretches the bounds of privacy and raises questions about the pros and cons of increased surveillance. It isn’t even the first Amazon product designed to move about your house. Last year, the giant retailer unveiled its Always Home Cam, a flying Ring security camera.

Guariglia says that with the Always Home Cam, he isn’t overly concerned about data collection because the drone, which is set to go on sale later this year, is designed to fly predetermined paths around a home. It can’t be remotely accessed and controlled.

That’s not the case with Astro, which brings home surveillance to a new level. Being able to drive the bot is a game changer, Guariglia says, giving Amazon more opportunity to collect data. It also potentially gives police a new way to see inside your home.

Law enforcement can already serve a search warrant on Amazon — not you — to gain access to data recorded by stationary devices like Echos and web cameras. In fact, according to Amazon’s most recent bi-annual information request report, law enforcement around the world filed a total of 30,000 information requests, including subpoenas, warrants and court orders, with the company in the first six months of this year.

If a warrant covered an Astro, Guariglia says, the bot could theoretically become a mobile surveillance device for law enforcement.

Like any other connected device, Astro is another opportunity for cybercriminals to compromise the bot and steal its data.

Amazon maintains that user privacy is key to Astro’s design and says much of its data processing is done on the device itself. In addition, users can designate “out of bounds” areas of the house that Astro isn’t allowed to enter. Users can also manually switch off its cameras and microphones whenever they want.

In addition, an easy-to-see light indicates when Astro is streaming audio or video to the cloud. And only a mobile device that’s been paired with Astro and logged in to the same Amazon account can be used to access the robot’s live camera feed and Astro app remote controls.

Amazon released a statement Friday saying that customer trust is its “top priority,” which is why Astro, like its other products, is built with “multiple layers of privacy and security controls to keep customer information safe.”

Motherboard, a tech news site, was given internal documents about the project and spoke to a person who worked on Astro. That person, who wasn’t named in the story, called Astro a “disaster that’s not ready for release.” The person also said the robot is a “privacy nightmare.”

It’s up to individual consumers to decide whether they want to trade privacy for convenience, says Jen Caltrider, who manages the Mozilla Foundation’s Privacy Not Included guide, which documents the privacy-respecting practices of key consumer products.

Amazon has in recent years improved its security practices, such as boosting encryption and adding more on-device processing, Caltrider says. But the same can’t be said when it comes to privacy.

“They’re pretty slippery about saying one thing and then acting questionably,” Caltrider says. “I don’t trust them and I wouldn’t recommend that others trust them.”

For example, Amazon says that if you ask, it’ll delete the Echo recording of you asking Amazon to order hemorrhoid cream. But it’ll still retain a record of you ordering that cream.

And consumers often need to go through Amazon customer service to get a recording deleted, which can be arduous, she says. On top of that, sometimes that process is complicated if it’s unclear which of Amazon’s privacy policies apply — Amazon, Ring and other brands have separate ones. Government privacy regulations, such as the GDPR in the European Union and the California Consumer Privacy Act need to be factored in, too.

“I’d be surprised if Amazon even has a decent understanding of how their whole privacy ecosystem connects,” Caltrider says.