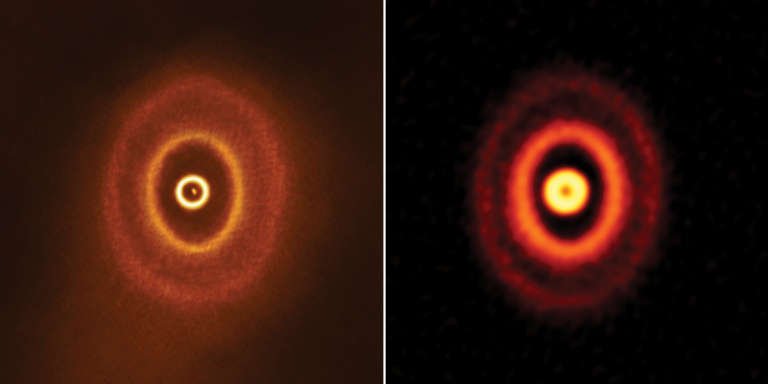 Potential discovery of a circumtriple planet has implications for bolstering our understanding of planet formation.

In a distant star system — a mere 1,300 light years away from Earth — UNLV researchers and colleagues may have identified the first known planet to orbit three stars.

Unlike our solar system, which consists of a solitary star, it is believed that half of all star systems, like GW Ori where astronomers observed the novel phenomenon, consist of two or more stars that are gravitationally bound to each other.

But no planet orbiting three stars — a circumptriple orbit — has ever been discovered. Perhaps until now. An image of GW Orionis, a triple star system with a mysterious gap in its surrounding dust rings. UNLV astronomers hypothesize the presence of a massive planet in the gap, which would be the first planet ever discovered to orbit three stars. The left image, provided by the Atacama Large Millimeter/submillimeter Array (ALMA) telescope, shows the disc’s ringed structure, with the innermost ring separated from the rest of the disc. The observations in the right image show the shadow of the innermost ring on the rest of the disc. UNLV astronomers used observations from ALMA to construct a comprehensive model of the star system. Credit: ALMA (ESO/NAOJ/NRAO), ESO/Exeter/Kraus et al.

But they found a substantial, yet puzzling, gap in the circumtriple disc.

The research team investigated different origins, including the possibility that the gap was created by gravitational torque from the three stars. But after constructing a comprehensive model of GW Ori, they found that the more likely, and fascinating, explanation for the space in the disc is the presence of one or more massive planets, Jupiter-like in nature. Gas giants, according to Jeremy Smallwood, lead author and a recent Ph.D. graduate in astronomy from UNLV, are usually the first planets to form within a star system. Terrestrial planets like Earth and Mars follow.

The planet itself cannot be seen, but the finding — highlighted in a September study in the Monthly Notices of the Royal Astronomical Society — suggests that this is the first circumtriple planet ever discovered. Further observations from the ALMA telescope are expected in the coming months, which could provide direct evidence of the phenomenon.

“It’s really exciting because it makes the theory of planet formation really robust,” Smallwood said. “It could mean that planet formation is much more active than we thought, which is pretty cool.”