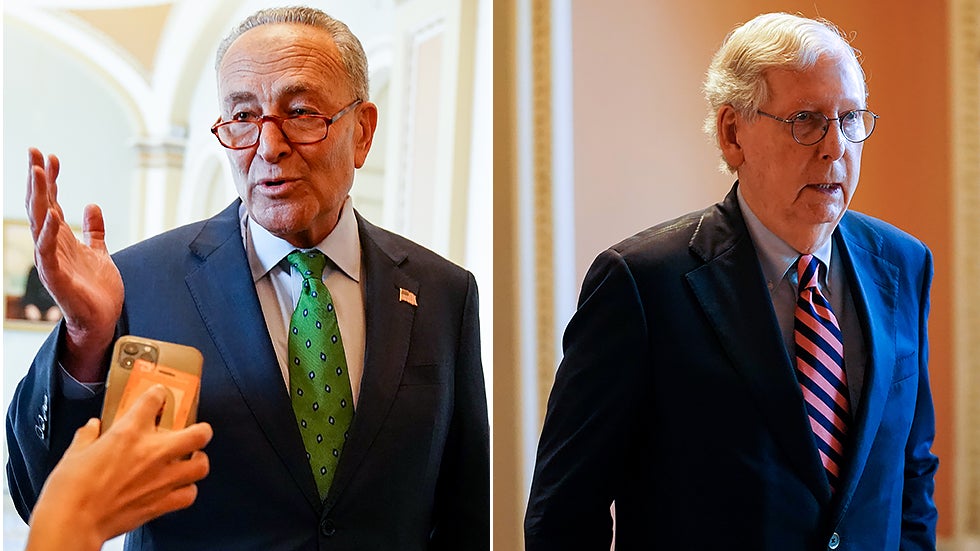 The White House and Democrats sought Monday to make Senate Minority Leader Mitch McConnell (R-Ky.) feel some political pain for the high-stakes poker game he is playing with Democrats over raising the debt ceiling.

Weeks after McConnell telegraphed his strategy that Republicans will not lift a finger to extend the nation’s borrowing limit, Democrats engaged in a choreographed effort to convince voters that the GOP leader would be responsible for a debt default.

President Biden took a starring role, using the bully pulpit to say the U.S. faced a real possibility of defaulting, and that McConnell would be to blame.

He said McConnell’s actions were “dangerous,” the results of a default would be “dire” and that whether the U.S. made an Oct. 18 deadline set by the Treasury Department was “up to Mitch McConnell.”

McConnell left out that Democrats did not use the filibuster to block a debt-ceiling hike, as McConnell and the GOP have done.

Democrats counter that the debt ceiling needs to be hiked for past spending, much of it the result of the tax-cut law and spending bills signed by former President Trump.

Yet if McConnell and Democrats are playing a high-stakes game of poker on the debt ceiling, many Republicans and a few Democrats see the GOP leader as holding the better cards and unlikely to fold.

Republicans received a confidence boost in their strategy last week after Democrats pulled language to suspend the debt limit out of a short-term government funding bill that also provided $28 billion for disaster relief, side-stepping a potential government shutdown.

While Democrats usually win political fights over government shutdowns, they didn’t have any appetite for sticking to their strategy of pairing the funding stopgap with the debt-limit suspension.

Instead, they passed a clean bill to fund the government until December along with disaster relief and money for Afghan refugee resettlement, which Biden signed into law Thursday.

Republicans saw the fight over Senate Majority Leader Charles Schumer’s (D-N.Y.) effort to pair the government funding package with a debt-limit measure as a victory and a prelude of what’s to come.

After Schumer last week declared the prospect of raising the debt limit with only Democratic votes via the budget reconciliation process a “non-starter,” Republican leaders privately predicted he would soon be forced to change course.

McConnell on Monday argued that any default would fall squarely in the president’s lap since his party controls both chambers of Congress and pointed to Democratic infighting over the $1 trillion Senate-passed infrastructure package, which is stalled in the House, as evidence of dysfunction.

“This unified Democratic government is having trouble governing. They couldn’t even pass the bipartisan infrastructure bill which the president negotiated and the Speaker of the House promised would pass last week,” McConnell said on the floor.

Even some Democrats tacitly acknowledge they as the party in control cannot allow a default, though they are careful to let Schumer take the lead on messaging.

Sen. Tim Kaine (D-Va.) encouraged his leadership to put debt-limit language in the budget resolution the Senate passed in August, which would have enabled Senate Democrats to move more quickly with a reconciliation bill to raise the debt limit without any GOP support.

“I thought that would have been the smart thing to do,” he said. “Ultimately, I feel there’s no way that Democrats are going to allow a default.”

“There’s no chance, zero, that Democrats will allow a default,” he added.

A Democratic senator who requested anonymity to speak frankly about Schumer’s tough position said his leadership will likely opt to raise the debt limit through a budget reconciliation bill.

“I don’t know, other than reconciliation, how we do it. I think if it comes to that, we should just do it. No one’s going to remember how it’s done in a month but they will remember if it’s not done,” said the lawmaker.

At the core of the Republican political strategy is the calculation that the president bears ultimate responsibility for the health of the U.S. economy. They are betting that Biden will feel compelled to pressure Democrats in Congress to use the reconciliation process to raise the debt limit to avoid what both sides acknowledge would be catastrophe for the financial markets if the U.S. defaults or comes close to defaulting on its debt.

Democrats, however, are betting that Republicans will get the blame for any default because controversial legislation almost always needs 60 votes to pass the Senate and argue that using the budget reconciliation process to bypass a GOP filibuster is risky because individual senators can drag out the process for days, bringing the Treasury Department harrowingly close to its Oct. 18 deadline.There are signs that Biden is more willing than Schumer and Speaker Nancy Pelosi (D-Calif.) to use the budget reconciliation process to solve the dilemma over the debt limit. He raised it as an option during a phone call with the Democratic leaders early last week.

And White House press secretary Jen Psaki on Monday declined to rule out the possibility of resorting to the budget reconciliation process to raise the debt limit, telling reporters that Biden wants to avert a crisis.

“He wasn’t ruling out options this morning as it relates to legislative paths forward, but what is very clear here is that the cleanest, easiest, fastest way to get this done is by the Republicans allowing Democrats to move forward with a vote. They can do that tomorrow and we can reduce the uncertainty for the American people,” she said.

“Going through the long, convoluted, difficult reconciliation process with [the] debt limit is very, very risky,” he said a week ago. “We’re not pursuing that.”

“I’m not going to say anything’s impossible, but the consistent message from our caucus is that would take additional time, a series of votes, and delay. Which is exactly what McConnell wants,” said Senate Majority Whip Dick Durbin (D-Ill.).