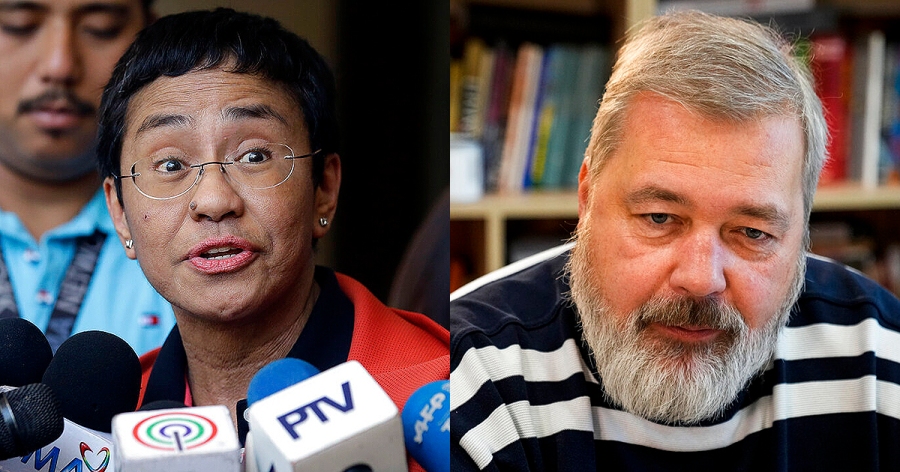 When Dmitry Muratov saw a Norwegian number flash up on his phone, he assumed it was a nuisance call. Finding out he was joint laureate of this year’s Nobel peace prize was a complete shock. “I am laughing. I didn’t expect this. It’s crazy here,” he told the Russian news site Podyom.

Muratov, the long-serving editor of one of Russia’s most fearless news outlets, Novaya Gazeta, promised to “leverage this prize for Russian journalists which [Russian authorities] are now trying to repress”.

Since Novaya Gazeta was established by Muratov and colleagues in 1993, it has investigated corruption inside and outside Russia, as well as the long wars in Chechnya. Six of the paper’s reporters and contributors have been murdered for their work. Muratov said the prize belonged to them: “It’s for Igor Domnikov, it’s for Yuri Shchekochikhin, it’s for Anna Stepanovna Politkovskaya, it’s for Nastya Baburova, it’s for Natalia Estemirova, for Stas Markelov,” he told Russian media. “It is that of those who died defending the right of people to freedom of speech.”

Muratov was born in the south-west Russian city of Saratov in 1961, becoming a journalist in the era of glasnost when the Soviet leader Mikhail Gorbachev allowed unprecedented openness to the media. The young Muratov began his career at the communist youth paper Komsomolskaya Pravda in 1987; he left in 1993 with dozens of colleagues to start Novaya Gazeta after disagreeing with the editorial policies of the populist daily.

Gorbachev, another Russian Nobel laureate, donated some of his peace prize award to help the new paper buy computers and pay staff. On Friday, Gorbachev described Muratov’s award as “very good news … it raises the importance of the press in the modern world to great heights”.

By 1995 Muratov was editor in chief, establishing Novaya as the leading voice of the Russian liberal class. He stood down in 2017, but returned in 2019, after being voted in by staff.

“Muratov is a living legend,” Pavel Kanygin, a veteran journalist at Novaya Gazeta, said. “He is very demanding but fair. He always wants us to go the extra mile, he is so passionate about his work.”

As Russia’s crackdown on independent media intensified under Vladimir Putin, the paper and its staff were repeatedly targeted. In 2018 a funeral wreath and severed sheep’s head were sent to the paper’s offices with a note addressed to a staff member who reported on the secretive Wagner mercenary group. Earlier this year, Novaya Gazeta said its offices in Moscow had been targeted with a “chemical attack”.

Despite the pressure, Novaya Gazeta has continued its investigations, revealing in the Panama papers in 2016 the offshore wealth of Russian officials close to Putin, and exposing Chechnya’s persecution of LGBT people.

Novaya Gazeta is one of the last independent outlets in Russia not labelled as a “foreign agent”, and staff hope Muratov’s award will shield it against future attacks.

“The last few months have been very difficult for Russian journalism,” Kanygin said. “We had a feeling we are all approaching a tragic ending. We were running out of hope. I hope this prize will help to protect us against attacks from the authorities.”