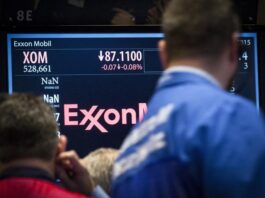 Dow Jones futures rose slightly late Thursday, along with S&P 500 futures and Nasdaq futures, with a possible infrastructure bill vote and Tesla deliveries in focus. The stock market made another lackluster rebound attempt Thursday, reversing lower and closing at session lows once again, despite Congress avoiding a government shutdown.

Retailers were big losers Thursday, amid weak earnings from CarMax (KMX) and Bed Bath & Beyond (BBBY). But there were broad-based losses once again.

Snap (SNAP), Nvidia (NVDA) and AMD (AMD) rebounded toward their 50-day lines but all closed below that key level.

Tesla stock dipped but is holding strong in a buy zone. Nio stock, Xpeng and Li Auto are all near multi-month lows. BYD stock has pulled back in the past few weeks but is still near record highs. All four China EV stocks rose Thursday.

The Senate and House have approved a short-term funding bill. It’s going straight to the White House for President Joe Biden’s signature, averting a partial government shutdown by a matter of hours. Congress still needs to approve a debt limit hike to avoid a government default, with Republicans insisting that Democrats pass it on their own. Treasury Secretary Janet Yellen said this week that Oct. 18 is the deadline, though the Congressional Budget Office suggests late October or early November is the drop-dead date for a default.

But the fate of the bipartisan $1 trillion infrastructure bill is in doubt. House Speaker Nancy Pelosi continued to say Thursday afternoon that the House would vote on the package tonight. But many progressives are vowing to oppose the deal. They want significant progress, or outright passage, of another, partisan tax-and-spending bill first. With Democrats holding only a three-seat majority in the House, and only a handful of Republicans likely to back the infrastructure bill, the odds of a high-profile defeat seem high. So Pelosi could pull the infrastructure bill at the last minute, unless she aims to send a message to some of her members.

Reports Thursday evening suggested that the House would cast votes, if at all, after 9 p.m. ET.

The 10-year yield fell from Thursday’s close to just below 1.5%.

Remember that overnight action in Dow futures and elsewhere doesn’t necessarily translate into actual trading in the next regular stock market session.

The stock market once again opened higher but struggled to advance, closing near session lows for a third straight session.

The Dow Jones Industrial Average tumbled 1.6% in Thursday’s stock market trading. The S&P 500 index sank 1.2%. The Nasdaq composite retreated 0.4% after trading higher for much of the session. The small-cap Russell 2000 lost 0.9%.

Apple stock and Microsoft fell nearly 1%. Facebook stock, Google and Amazon lost just a fraction. All are down sharply for the week.

The SPDR S&P Retail ETF (XRT) tumbled 4.75% on Thursday. CarMax plunged 13% on its earnings miss, with AutoNation slumping 6%. Both tumbled below buy points. BBBY stock crashed 22% to a 52-week low after missing and guiding lower on supply-chain woes, on on the heels of Nike (NKE) and RH (RH). Along with a Kohl’s (KSS) downgrade on supply-chain issues, a slew of retailers sold off, including Macy’s (M), Williams-Sonoma (WSM), Bath & Body Works (BBWI), Gap (GPS), Revolve (RVLV) and more.

The EV giant will report third-quarter deliveries and production figures as soon as Friday, though they could come over the weekend or as late as next Tuesday. Tesla deliveries will hit roughly 232,000, according to the latest, upwardly revised analyst consensus. Tesla sold the Model Y in Europe for the first time, likely boosting sales in that region. Tesla exported most of its Shanghai production in July and August, mostly to Europe, but September looks to be a big figure.

Chip shortages may be restraining Tesla production, but if so it’s only slowing the growth in output so far. Meanwhile, global auto production has plunged, boosting Tesla demand and pricing

Nio and Xpeng make EVs, while the Li Auto’s Li One has a small gas engine to extend range.

BYD, which has been ramping up output, should easily outstrip Nio, Xpeng and Li Auto sales combined for September.

Also, Nio began selling its ES8 in Norway on Thursday, joining rivals Xpeng and BYD in that key EV market.

The S&P 500, after an inside day Wednesday, undercut Tuesday’s low and came within a point of undercutting its Sept. 20 low. It was the worst close since Aug. 19.

The Dow Jones is still above its Sept. 20 low, but then it never reclaimed its 50-day line last week. The Russell 2000 is back below its 200-day line.

The Nasdaq composite tried to rebound but faded to just above its Aug. 19 low. With tech giants such as Apple slumping and key sectors such as chips and software retreating, the Nasdaq has lost its upward momentum.

The major indexes are all below their 50-day moving averages, trending lower over the past several weeks. The Nasdaq’s 21-day line is about to undercut its 50-day, with the S&P 500 already suffering that short-term bearish cross.

Leading stocks, with a few exceptions like Upstart (UPST) or Tesla stock, are trying to hang on or heavily damaged.

What To Do Now

Investors have little or no reason to increase exposure. When the stock market is living below the 21-day and 50-day line, good things aren’t happening. The general trend remains weak. Could Thursday’s low be the bottom, and the market rally roars back to record highs from here? Sure, but we also could be on the cusp of a market correction.

Most of the money is made in strong market uptrends. Making big bets against long odds is a strategy for heavy losses.

Keep your exposure light, focusing on stocks that are working or are longer-term winners. Focus on building up your watchlists and preparing for the next money-making market.