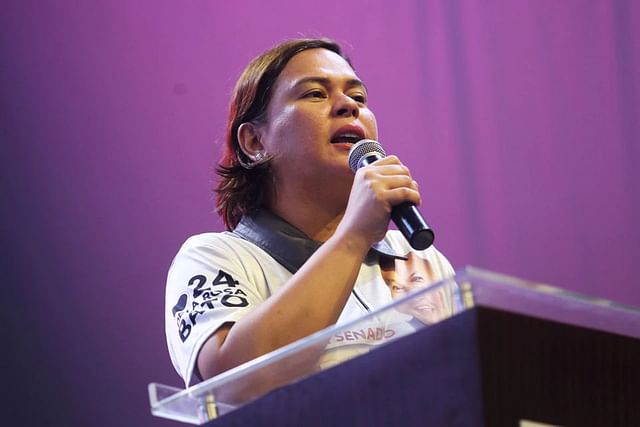 Sara Duterte-Carpio, daughter of Philippine President Rodrigo Duterte, will run for president. This was stated in a report of ABS-CBN News on Saturday based on Rodrigo’s interview.

Rodrigo announced yesterday that he would not run for vice president in next year’s election. He will retire from politics at the end of his current term as president. Now it is being said that Rodrigo’s daughter Sara will elect the president.

ABS-CBN News reports that Rodrigo’s close aide, Senator Christopher Bongo, will be Sarah’s running mate in the presidential election. He has already completed his candidacy form for the post of Vice President.
Rodrigo came to power in 2016 with a promise to fight crime and fight drugs. There are allegations that more than 6,000 people have been extrajudicially killed in the name of the war on drugs in the Philippines during his rule since he was elected president.

According to the Philippine Constitution, a person can hold office for only one term as President. According to him, Rodrigo has no chance to run for the presidency in the second round.

Rodrigo recently hinted at running for vice president, exploiting loopholes in the constitution. But yesterday he also announced his withdrawal from that decision. He also announced that he would no longer be active in politics at the end of his presidency.

The journalist asks Rodrigo, is it clear that Sara-Go is choosing the pair?
In response, Rodrigo said yes, Sara-go.

In the same interview, Rodrigo was asked when his daughter would run for president. In response, Rodrigo said he did not really know. He has absolutely no idea about this.

Rodrigo was then asked if he had allowed his daughter to run for president. In response, the Philippine president said, “We don’t really talk about politics. We never talked about politics. I would say it was done for good. ‘

The news agency Reuters contacted a spokesman for his daughter Sarah to confirm Rodrigo’s comments. The spokesperson said, “I know as much as the news has been published in the local media. We have nothing to say about it. ”

Reuters contacted Bong Gore in the same context. But there was no immediate response from him.

Sara is currently the mayor of Davao City in the southern Philippines. Last month, Sarah said she and her father had decided together that one of the two would run in the election.

Sara is ahead in all the polls conducted this year.