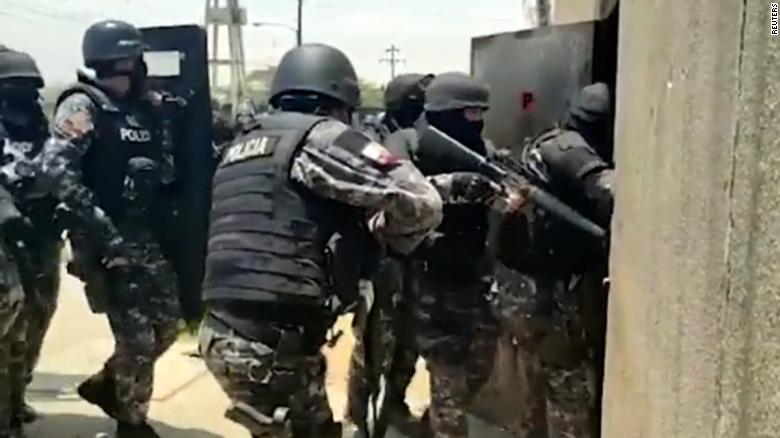 Ecuador plans to pardon and commute thousands of sentences in order to free up space in the country’s prisons following a deadly riot at a penitentiary in the coastal city of Guayaquil this week.

The Director of Ecuador’s prison agency SNAI, Bolivar Garzon, said on Friday that up to 2,000 inmates, including elderly people, women and those with disabilities and terminal illnesses, would be prioritized on the pardon list for release and foreign nationals will be deported.
“At the moment, 82 cases are being processed,” Garzon said, adding that the SNAI would hand foreigners over to the Ecuadorian government to oversee their repatriation.
Investigations are still ongoing at the Litoral penitentiary in Guayaquil, after violent clashes between rival gangs at the high-security facility left 118 inmates dead and dozens wounded on Tuesday.
According to Ecuadorian Interior Minister Alexandra Vela, the forensic team of the National Police has been able to identify 41 deceased victims and is working to identify 77 additional bodies.
Those killed suffered from injuries resulting from bullets and grenades, according to regional police commander Fausto Buenaño. 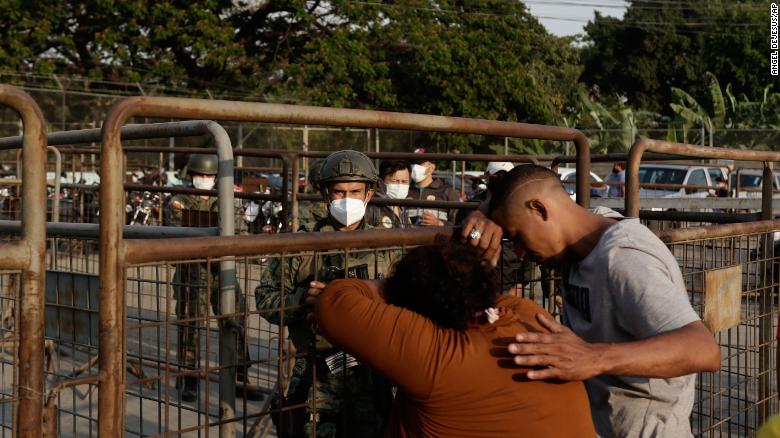 Relatives of prisoners await news outside the Litoral penitentiary in Guayaquil on September 29.
During the investigation into the massacre authorities seized guns, ammunition, 25 bladed weapons, three explosive devices and various drugs, according to SNAI. A video released by Ecuador Police on Thursday captured security personnel retrieving some of the items from what appears to be one of the prison cells. The clip showed handguns wrapped in plastic, various knives, cell phones, packages of ammunition, and different packages of drugs.
“The inmates call us (saying) ‘Sister they are killing me. Call the police, they need to enter the pavilion (prison wing) five,” the sister of one inmate told Reuters.
Ecuador’s President Guillermo Lasso said in a televised address on Wednesday that the prison was not yet entirely secured, and urged inmates’ relatives and families to stay away from the area.
“I wish I was able right now to say that yes, we have completely secured the Litoral Penitentiary, but frankly I cannot. This meeting we just had was to organize the next steps forward, and I hope in the next few hours you will see some of the plans we agreed in action,” he said.
At least five of the deceased prisoners were beheaded before responding police and the tactical forces “managed to restore order,” the governor of Guayas Province, Pablo Arosemena, said Tuesday.
Ecuador’s prisons have been racked with bloodshed this year, with more than 140 violent deaths reported, according to SNAI figures.
In response to the latest deaths, the government has declared a 60-day state of emergency across Ecuador’s prisons. The measure allows military troops to be deployed to penitentiaries, and limits inmates’ rights to privacy and free association in order to allow searches and other surveillance measures.
The state will devote $24 million to the prisons system during the state of emergency, Lasso added during his speech.
The head of Ecuador’s Armed Forces and the General Commander of Ecuador Police conducted an inspection of the prison to ensure security and protection measures were in place, Ecuador’s Armed Forces said on their official Twitter account Thursday.