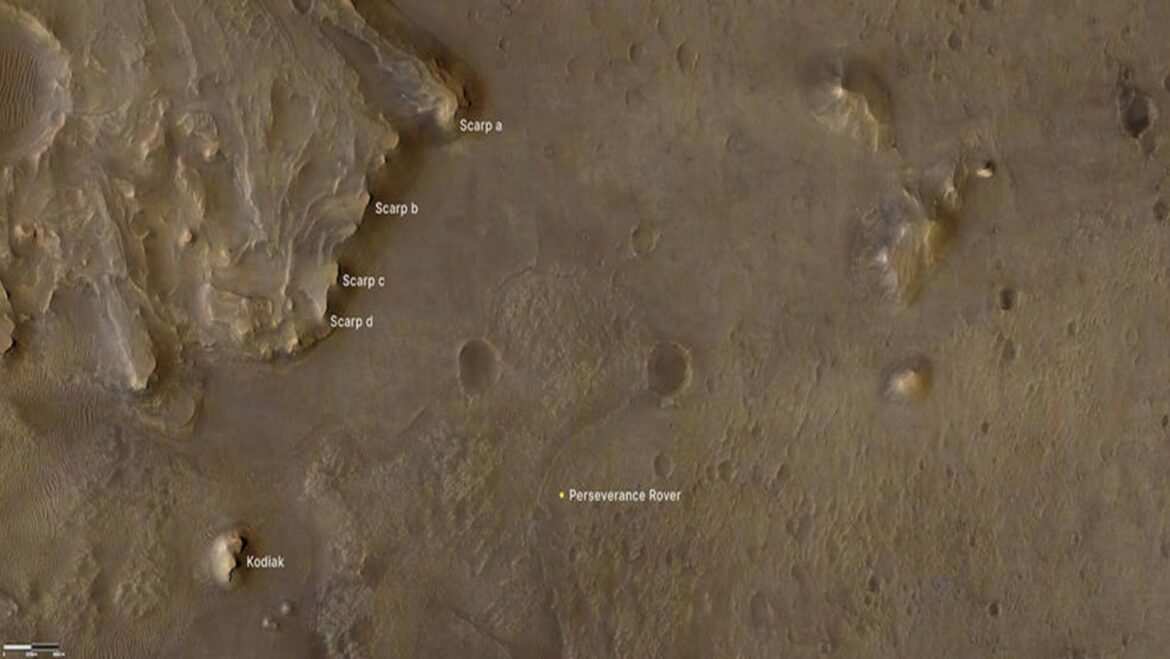 NASA’s Perseverance Mars rover team has confirmed that the red planet’s Jezero Crater was once the site of a delta-lake system.

In a study published Thursday in the journal Science, the researchers also wrote that images from the rover – taken in the three months after Perseverance landed in February – suggest the area experienced significant late-stage flooding events.

The images were taken of long and steep slopes called escarpments, or “scarps,” in the delta, which reportedly formed from sediment at the mouth of an ancient river that fed the lake.

The photos revealed that the fan-shaped delta had outcrop faces the team said had been invisible from orbit and record the hydrological evolution of the crater.

The rock outcrop “Kodiak” had only been imaged from orbit, but images revealed its stratigraphy along the eastern face, showing layering that a geologist would expect to find in a river delta on Earth. 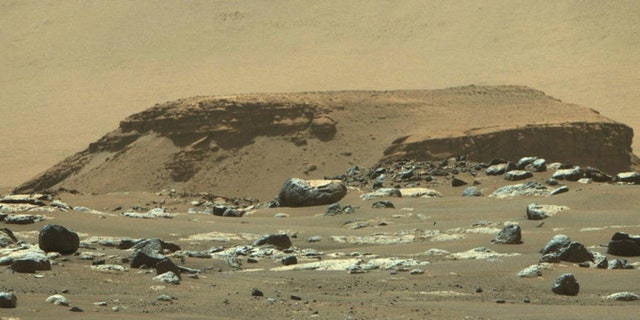 This image of “Kodiak” – one remnant of the fan-shaped deposit of sediments inside Mars’ Jezero Crater known as the delta – was taken by Perseverance’s Mastcam-Z instrument on Feb. 22, 2021. (Credits: NASA/JPL-Caltech/ASU/MSSS)

“We interpret the presence of inclined strata in these outcrops as evidence of deltas that advanced into a lake. In contrast, the uppermost fan strata are composed of boulder conglomerates, which imply deposition by episodic high-energy floods,” the study’s authors wrote. “This sedimentary succession indicates a transition, from a sustained hydrologic activity in a persistent lake environment, to highly energetic short-duration fluvial flows.”

“Never before has such well-preserved stratigraphy been visible on Mars,” Nicolas Mangold, a Perseverance scientist from the Laboratoire de Planétologie et Géodynamique in Nantes, France, and lead author of the paper, said in a NASA release. “This is the key observation that enables us to once and for all confirm the presence of a lake and river delta at Jezero. Getting a better understanding of the hydrology months in advance of our arrival at the delta is going to pay big dividends down the road.”

The photos that led them to these conclusions were taken by Perseverance’s left and right Mastcam-Z cameras in addition to its Remote Micro-Imager.

NASA said that the images also provided the team with insight into where they could best look for rock and sediment samples to collect and cache.

Farther up the scarps, Mastcam-Z and RMI found stone and boulders which the team said must have been carried by fast-moving flash flooding.

“These results also have an impact on the strategy for the selection of rocks for sampling,” Sanjeev Gupta, a Perseverance scientist from Imperial College, London, and a co-author of the paper, said in a statement. “The finest-grained material at the bottom of the delta probably contains our best bet for finding evidence of organics and biosignatures. And the boulders at the top will enable us to sample old pieces of crustal rocks. Both are main objectives for sampling and caching rocks before Mars Sample Return.”

Lastly, the scientists described the water level of Jezero’s lake as fluctuating by tens of yards before its disappearance – though it is not known if the changes resulted from flooding or more gradual, environmental shifts.

The team has determined that the changes occurred later in the delta’s history and that lake levels were at least 330 feet below the highest level.

“A better understanding of Jezero’s delta is a key to understanding the change in hydrology for the area,” Gupta noted, “and it could potentially provide valuable insights into why the entire planet dried out.”

The delta will be the site for the rover team’s second science campaign in 2022.

“We now have the opportunity to look for fossils,” team member Tanja Bosak, associate professor of geobiology at MIT, told MIT News. “It will take some time to get to the rocks that we really hope to sample for signs of life. So, it’s a marathon, with a lot of potential.”