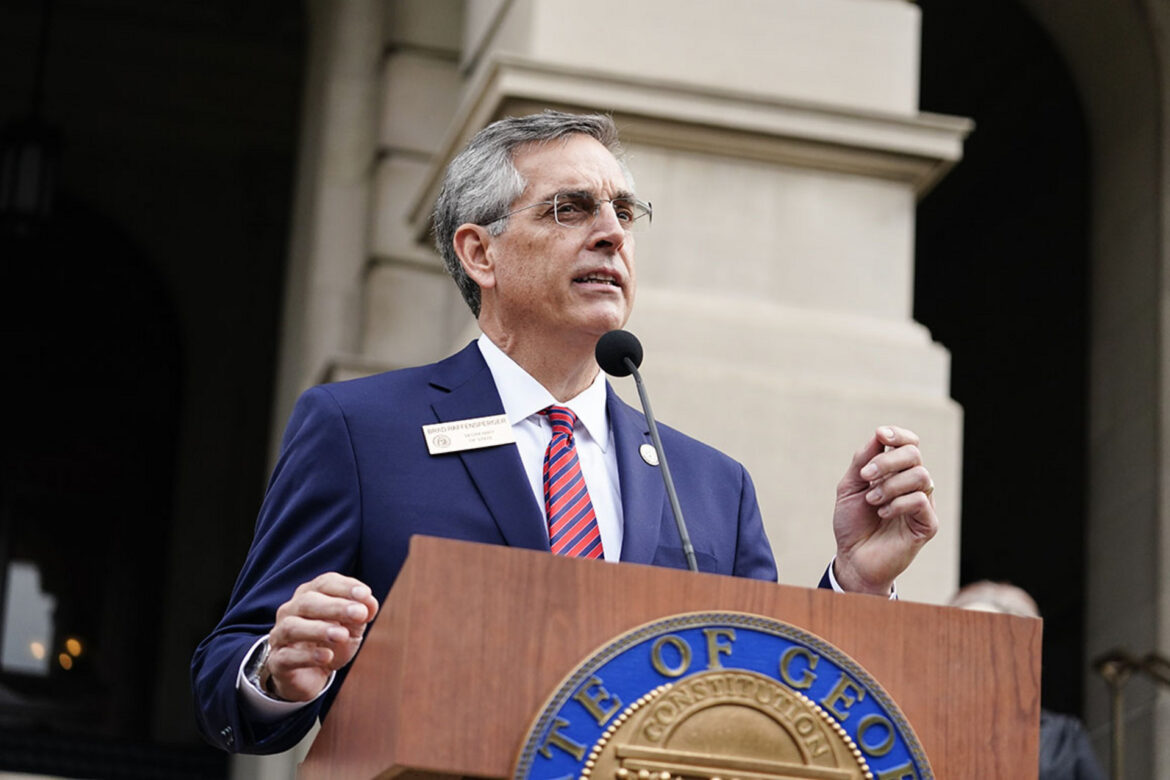 Brad Raffensperger is the only one who refuses to shut up and take it.

Raffensperger, who has borne the brunt of Trump’s wrath as the top election official in the state, is running a damn-the-torpedoes reelection campaign that directly confronts the former president — even though it could cost him the GOP nomination.

In a party where Trump’s enemies tend to see their political careers abruptly ended, Raffensperger’s approach is being closely watched by Republicans within the state and outside.

“The last internal poll I saw said that 87 percent of Republican primary voters felt like the election was stolen,” said former Republican Rep. Lynn Westmoreland (R-Ga.). “With those kinds of numbers, I don’t see Brad getting through the primary.”

If Raffensperger isn’t Trump’s top GOP nemesis, he’s close to it. The Georgia secretary of state refused Trump’s requests to alter the state’s vote count and feuded with the former president over Trump’s baseless claims of widespread voter fraud. At one point, Raffensperger’s office secretly recorded Trump trying to persuade the secretary of state to “find” votes to make him the winner — a potential crime by Trump that local prosecutors are now investigating.

As a result, Trump has showered him with criticism for nearly a year, going so far as to call Raffensperger an “enemy of the people.”

Trump‘s obsession with Raffensperger shows no sign of fading. In July, the former president sent him a letter asking yet again to decertify the results of the 2020 election. As recently as two weeks ago, during a Georgia rally, Trump called Raffensperger “incompetent and strange.“

Duncan, who has been critical of Trump, decided against running for another term and instead wrote a book about the future of the party. Kemp and Carr are seeking reelection next year along with Raffensperger, but have largely ignored the president’s attacks.

Raffensperger has taken a different tack.

After Trump used his rally to mock-endorse Democrat Stacey Abrams — who is expected to mount her second campaign for Georgia governor after refusing to formally concede her last race for the office three years ago — Raffensperger wrote a USA Today op-ed comparing Trump to Abrams.

Next month he’ll publish a book called “Integrity Counts,” billed by Simon & Schuster as Raffensperger’s “inspiring story of commitment to the integrity of American democracy.”

“We’re out there setting the record straight. No. 1 is that President Trump did not carry the state of Georgia,” Raffensperger told POLITICO, pointing to multiple recounts, reviews and investigations that confirmed the accuracy of the Georgia results.

Seth Bringman, a spokesperson for Abrams, swiped at Raffensperger for comparing her 2018 loss to Trump’s, saying that “Abrams succeeded in court to count more Georgians’ votes, with reputable attorneys presenting coherent arguments, and the courts agreed and counted those votes. It surprises us that Raffensperger equates counting eligible votes based on fact with throwing out the will of the people based on the Big Lie.”

Raffensperger’s op-ed, Bringman said, amounts to “attacking Stacey and pushing election subversion in a sad attempt to win the votes of the insurrectionist wing in his upcoming primary.”

Raffensperger’s frontal assault on Trump is widely viewed as a doomed strategy in a state where Trump dominates the GOP and majorities of Republicans believe the 2020 election was stolen — a January poll showed only 45 percent of Republicans supported the secretary of state.

That survey was taken just after Republican incumbents lost their two U.S. Senate runoff races on Jan. 5. Both senators called on Raffensperger to resign at Trump’s insistence after he lost Georgia in November.

Speaking of Raffensperger’s confrontational approach toward Trump, Westmoreland said, “it’s probably not helpful in a primary. Republican voters think the election was stolen.” But he also said many Republicans were troubled with Trump’s rally comment that Abrams “might be better than having your existing governor.”

While Raffensperger acknowledges the difficulties he faces going forward, he said he has no choice but to speak out. He also did not fault Kemp or Carr for failing to denounce Trump’s efforts to overturn the election.

“It’s a conundrum on how to respond to some statements [from Trump] when they’re over the top, or they’re said pejoratively,” Raffensperger said. “If the former president has endorsed Stacey Abrams, I would think that would be shocking for most Republicans. ”

Raffensperger said he has faith that voters will reward him for running a race “with integrity” and that “they understand that I’ll make the hard, difficult calls of standing up … because it’s easy to follow your integrity. It may not be fun. But the decision was easy, because it was based on the law, based on the Constitution, and based on the truth.”

Trump is expected to return to the state before the 2022 primaries, and he’s certain to trash Raffensperger again. Raffensperger said he’s comfortable continuing to push back against Trump if the situation warrants.