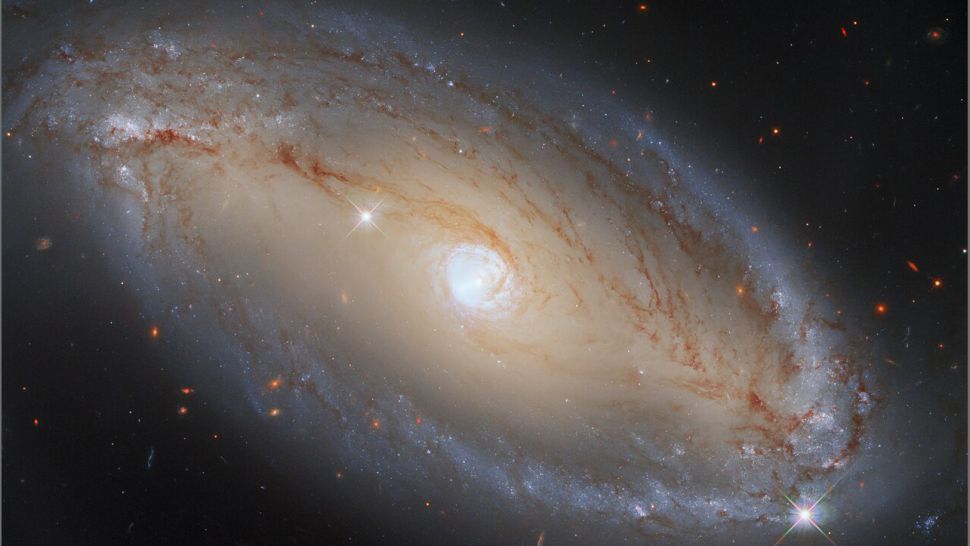 A cosmic hurricane shows its ‘eye’ in a new image from the Hubble Space Telescope.

The spiral galaxy NGC 5728 has quite a powerhouse at its center. This structure located 130 million light-years from Earth in the constellation Libra is in a unique cosmic category thanks to its active core.

NGC 5728 is a Seyfert galaxy, which means that one of its particular characteristics is the active galactic nucleus at its core that shines bright thanks to all the gas and dust that is hurled around its central black hole. Sometimes galactic cores are busy and luminous enough to outshine the rest of the galaxy in visible and infrared light. But Seyfert galaxies like NGC 5728 are a special Goldilocks treat, because human instruments can still view the rest of Seyfert galaxies clearly.

A full-sized view of the spiral galaxy NGC 5728 as seen by the Hubble Space Telescope. (Image credit: ESA/Hubble, A. Riess et al., J. Greene)The European Space Agency (ESA) published this new image on Monday (Sept. 27). According to ESA, which jointly operates the Hubble Space Telescope with NASA, the spacecraft used its Wide Field Camera 3 (WFC3) to capture this view. Officials said in a statement that describes the photo that even as glorious as this cosmic scene appears here, there is also a lot going on near NGC 5728 that the camera doesn’t capture.

“As this image shows, NGC 5728 is clearly observable, and at optical and infrared wavelengths it looks quite normal,” ESA officials wrote in the description. “It is fascinating to know that the galaxy’s centre is emitting vast amounts of light in parts of the electromagnetic spectrum that WFC3 just isn’t sensitive to!”

It turns out that the iris of NGC 5728’s galactic ‘eye’ might in fact be emitting some visible and infrared light that the camera would otherwise detect if it weren’t for the glowing dust surrounding the core.