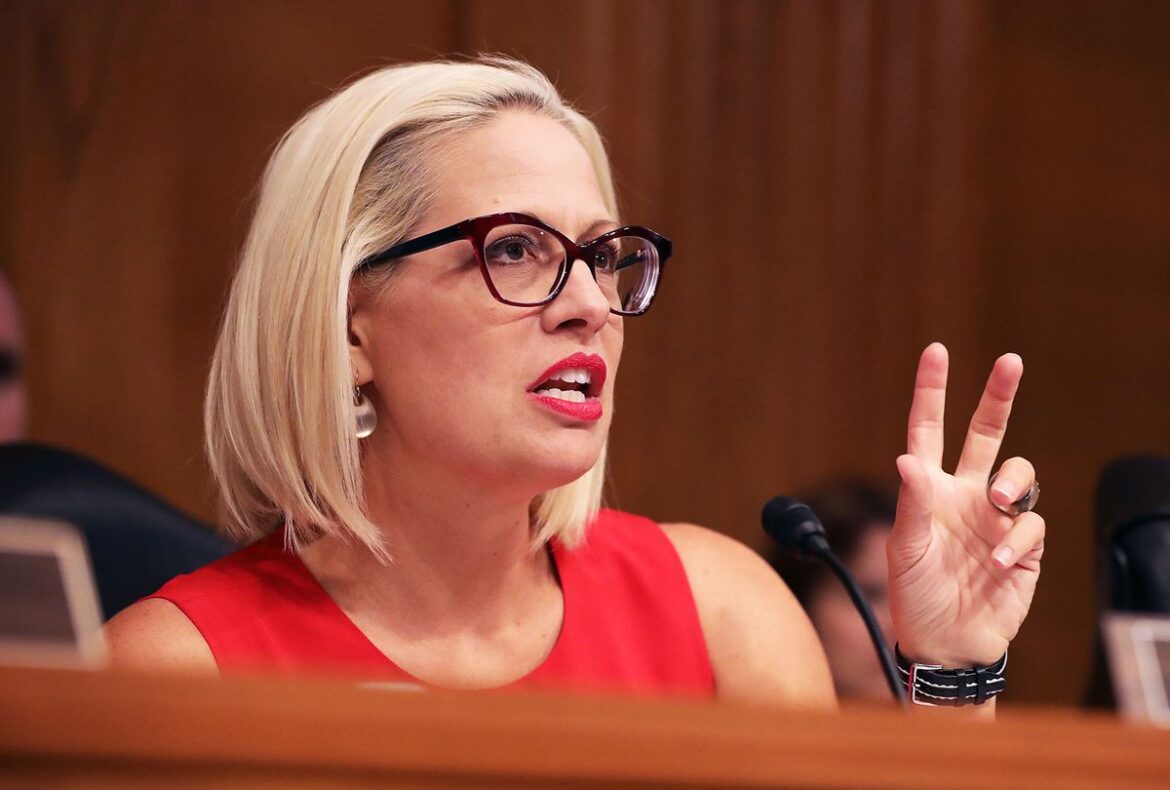 The mailers on behalf of Sen. Kyrsten Sinema, D-Ariz., being sent out to homes across Arizona paint a picture of a renegade politician who delivers results.

“Kyrsten Sinema reached across the aisle to pass The Infrastructure and Jobs Act,” says one mailer obtained by NBC News, adding that because of Sinema’s leadership, “Arizona will receive” $110 billion to boost roads and bridges, enhanced broadband access and more.

The mailers provide a glimpse into the iconoclastic political identity that Sinema is creating at home in Arizona, while she sits at the center of an intraparty clash on Capitol Hill over President Joe Biden’s agenda. They also reveal how invested the enigmatic Arizonan is in the bipartisan infrastructure bill she co-wrote to bolster that identity.

But the mailers boast about $110 billion that may never get to Arizona, because that bill that hasn’t yet become law. And its passage is not inevitable. It has passed the Senate, but is being held up by House Democrats until Sinema — along with Sen. Joe Manchin, D-W.Va. — commits to voting for a robust safety-net package that contains Biden’s domestic priorities.

Sinema has given no such assurance, and in recent days and weeks, frustration among Democrats toward her has grown. Sinema issued a scathing statement Saturday attacking the House’s decision to delay a vote on her infrastructure bill, calling it an “ineffective stunt to gain leverage over a separate proposal” by some lawmakers.

Faiz Shakir, an adviser to Sen. Bernie Sanders, I-Vt., said Sinema’s anger validates the strategy to hold up the infrastructure bill until centrists like her negotiate a deal on the major social policy bill.

“The angrier they get, the more obvious it seems that their desire for a reconciliation bill is nil,” Shakir said. “This substantiates the strategy of compelling them to get to yes.”

“When you’re negotiating between essentially five parties at this point, opaqueness does not help,” Gallego told NBC News. “And I hope that we can get to a place where we can all work together, trust each other, and pass a bill that really benefits the country.”

Sinema’s office has declined to comment on what price tag or policies she supports, saying she won’t negotiate through the press. A spokesman added that she has held myriad meetings with Biden and Senate Majority Leader Chuck Schumer to convey her views.

Sinema’s reticence on the multitrillion-dollar bill led to a stalemate this week over House Democrats’ hopes of passing her infrastructure bill. Speaker Nancy Pelosi sought to put it to a vote on Thursday, which House centrists had demanded, but progressives torpedoed it by threatening to vote it down. Now both bills are delayed while negotiations on a deal proceed.

Manchin publicly revealed his counteroffer for the first time on Thursday — $1.5 trillion in spending, guardrails on social programs and higher taxes on the wealthy. Sinema, by contrast, has stayed mum about her demands, but her office said Thursday afternoon in a tweet that she “continues to engage directly in good-faith discussions” with party leaders “to find common ground.”

First elected to the Senate in 2018, Sinema doesn’t face re-election until 2024. But some Democrats with deep pockets are already plotting to replace her in the party primary if she doesn’t change course and get behind Biden’s agenda. Gallego has been floated as one prospect.

At a private Democratic caucus meeting Friday, Rep. Tom O’Halleran, D-Ariz., gave a rousing speech about getting things done and spoke of how helpful Biden’s agenda would be for his state. It prompted House Democratic Caucus Chair Hakeem Jeffries, D-N.Y., to quip that he should seek higher office.

“I am tempted to comment on a possible Senate candidacy,” Jeffries said, according to two sources in the room.

The remark, widely perceived as a dig against Sinema, drew applause, the sources said.

Democrats have grown nervous by reports in The New York Times and Politico that Sinema has privately said she won’t support increases in individual or corporate tax rates, and that she opposes the party’s plan to lower prescription drug costs by letting Medicare negotiate prices. That opposition has long been encouraged by the pharmaceutical industry. Sinema’s office wouldn’t comment on the reports when asked by NBC News.

Biden told House Democrats behind closed doors Friday that he has spent “tens of hours” speaking with Sinema, according to Rep. Annie Kuster, D-N.H., who was in the room.

The pro-Sinema mailers are addressed from New Jersey and sent by the centrist group Center Forward, which has ties to the Blue Dog Coalition, a group of moderate House Democrats that Sinema was part of during her tenure in the chamber.

Sinema allies say her critics shouldn’t be surprised given her track record in the House, when she voted against Nancy Pelosi to lead the Democratic caucus and showed a tendency to break with her party.

Arizona, once dominated by Republicans, is an increasingly competitive state that voted to elect a Democratic president and two Democratic senators in the last three years. Some party organizers in Arizona fear that if Sinema shrinks or sinks the reconciliation package, it could demoralize the party base and hurt her colleague, Sen. Mark Kelly, D-Ariz., in his 2022 re-election bid.

“I don’t have any sense of what the hell she’s doing,” said one Democratic operative based in Arizona who supported her 2018 campaign and asked to remain anonymous for fear of retribution.

“She’s pissing off all the activists,” the operative said. “If this fails, there is going to be anger like I’ve never seen before.”