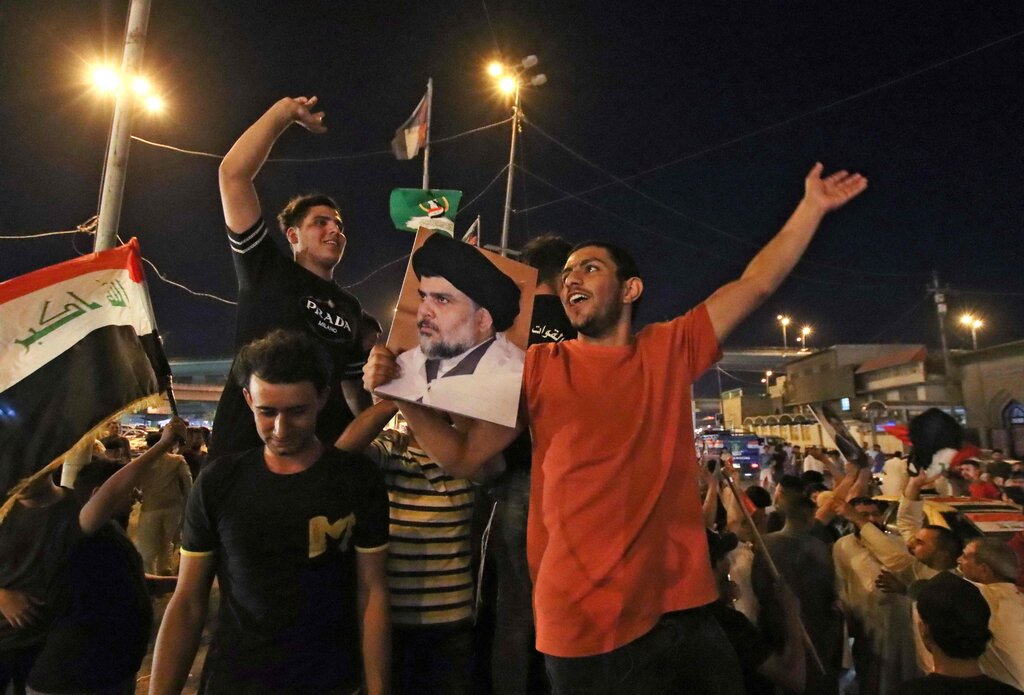 Results showed the party of Muqtada al-Sadr making the biggest gains in a vote that could help shape Iraq’s direction and its relationship with both the United States and Iran.

Followers of a Shiite cleric whose fighters battled U.S. forces during the occupation made the biggest gains in Iraq’s parliamentary election, strengthening his hand in determining whether the country drifts further out of the American orbit.

While independent candidates won some seats for the first time in a political landscape altered by anti-government protests, it became increasingly clear as ballots were tallied Monday that the big winner in the Sunday vote was Sairoun, the political movement loyal to the cleric, Muqtada al-Sadr.

Sairoun won up to 20 additional seats in Parliament, consolidating its status as the single biggest bloc in the chamber and giving the mercurial cleric an even more decisive vote over the country’s next prime minister.

The outcome could further complicate Iraq’s challenge in steering diplomatically between the United States and Iran, adversaries that both see Iraq as vital to their interests. Pro-Iranian militias have played an increased role in Iraq since the rise of the Islamic State in 2014 and have launched attacks on U.S. interests in the country.

Mr. al-Sadr has navigated an uneasy relationship with Iran, where he has pursued his religious studies. Regarding the United States, he and his aides have refused to meet with American officials.

He and the Iranian leadership shared similar goals when his fighters fought U.S. forces after 2003. But Mr. Sadr is viewed as an Iraqi nationalist, an identity that has sometimes put him in conflict with Iran — a country he cannot afford to antagonize.

In a speech Monday night, Mr. al-Sadr said all embassies are welcome in Iraq as long as they do not interfere in Iraqi affairs or the formation of a government. The cleric also implicitly criticized the Iran-backed militias, some of which refer to themselves as “the resistance.”

“Even if those who claim resistance or such, it is time for the people to live in peace, without occupation, terrorism, militias and kidnapping,” he said in an address broadcast on state TV. “Today is the victory day of the people against the occupation, normalization, militias, poverty, and slavery,” he said, in an apparent reference to normalizing ties with Israel.

“He is using some sharp language against Iran and the resistance groups affiliated with Iran,” said Gheis Ghoreishi, a political analyst who has advised Iran’s foreign ministry on Iraq, speaking about Mr. Sadr’s victory speech in Clubhouse, an online discussion group. “There is a real lack of trust and grievances between Sadr and Iran.”

In Baghdad Monday night, young men jammed into pickup trucks, waving flags, playing celebratory songs and carrying photos of Mr. Sadr as they cruised the streets of the capital.

The election authorities announced preliminary results Monday evening with official results expected later this week. With 94 percent of the vote counted, election officials said the turnout was 41 percent — a record low that reflected a deep disdain by Iraqis toward politicians and government leaders who have made Iraq one of the most corrupt countries in the world.

Activists who were part of anti-government protests that brought down the Iraqi government in 2019 won up to a dozen seats, running for the first time in this election, which was called a year early to answer demands for changes in Iraq’s political system.

That system, in which senior government posts are divided by political leaders along sectarian and ethnic lines, remains unchanged. But a new electoral law loosened the stranglehold of large political blocs and made it easier for independent candidates and smaller parties to win seats.

Mr. al-Maliki, a Shiite, gained wide support for having sent Iraqi government troops to break the militias’ hold on Iraq’s southern city of Basra in 2008. But he was later blamed for a descent into sectarianism that helped foster the rise of the Islamic State.

But it was the Sadrists who were the clear winners on Sunday.

“Of course I voted for the Sadrist bloc,” said Haider Tahseen Ali, 20, standing outside the small grocery where he works in Sadr City, a sprawling Baghdad neighborhood and a bastion of Mr. al-Sadr’s base.

“Even if he ordered us to throw ourselves from the roofs of our houses, I would throw myself,” said Abbas Radhi, an election worker overseeing one of the Sadr City polling stations, referring to Mr. al-Sadr.

The cleric declared twice in the run-up to the vote that he was withdrawing his movement from the election process before reversing and declaring that the next prime minister should come from the Sadrist ranks. But Mr. al-Sadr appears open to negotiation about who should lead Iraq.

Prime Minister Mustafa al-Kadhimi, an independent who has tried to balance Iraq’s relations between the United States and Iran, and has made clear he wants to be prime minister again, will need Sadrist support.While Shiite parties dominate Iraqi politics, the biggest Kurdish faction, the Kurdistan Democratic Party, along with a Sunni faction headed by the Parliament speaker, Mohamed al-Halbousi, also emerged with enough seats to play a role in deciding the next prime minister.

The low turnout was a reflection of the disdain for Iraqi politicians, particularly among young voters who are faced with a future that offers few opportunities. Sixty percent of Iraq’s population is under the age of 25.

“Clearly, people are still disillusioned even more with the political parties and the political process,” said Farhad Alaaldin, head of the Iraq Advisory Council, a research group in Baghdad. “People don’t believe that this election would bring about change, and that’s why they didn’t bother to turn out to vote.”

The disillusionment extends from a deeply corrupt and dysfunctional government to the parliamentarians themselves. President Barham Salih has said an estimated $150 billion obtained through corruption has been smuggled out of Iraq since 2003.

The organization of the election, with new biometric voting cards and electronic transmission systems designed to deter widespread fraud seen in previous elections, was declared by international observers to have met international criteria.

But some organizations that had deployed observers during the voting cautioned that the low turnout meant a limited public mandate for the new government.

“In the aftermath of the elections, the low turnout may cause questions as to the legitimacy of the government,” said Sarah Hepp, the director of Friedrich-Ebert-Stiftung, a German-government funded political foundation.

The protest movement two years ago spread from the south of Iraq to Baghdad when thousands of young people took to the streets to demand jobs, public services and an end to a corrupt political system.

In a challenge to neighboring Iran, they also demanded an end to Iranian influence in Iraq. Iran’s proxy militias have become part of Iraq’s official security forces but in many cases do not answer to the Iraqi government and are blamed for assassinations and disappearances for which they are never held accountable.

Security forces and militia members killed more than 600 unarmed protesters since the October 2019 demonstrations, according to human rights groups.

One of the leading protest candidates, Alaa al-Rikabi, easily won a seat in the southern city of Nasiriya. Mr. al-Rikabi has said the movement’s main goal was to shift protests from the streets to Parliament, where he said he and some of the other new lawmakers would demand change.

“My people have not enough hospitals, not enough health care services. Many of my people are below the poverty line,” he said in an interview in August. “Most of them say they cannot feed their children, they cannot educate their sons and daughters.”