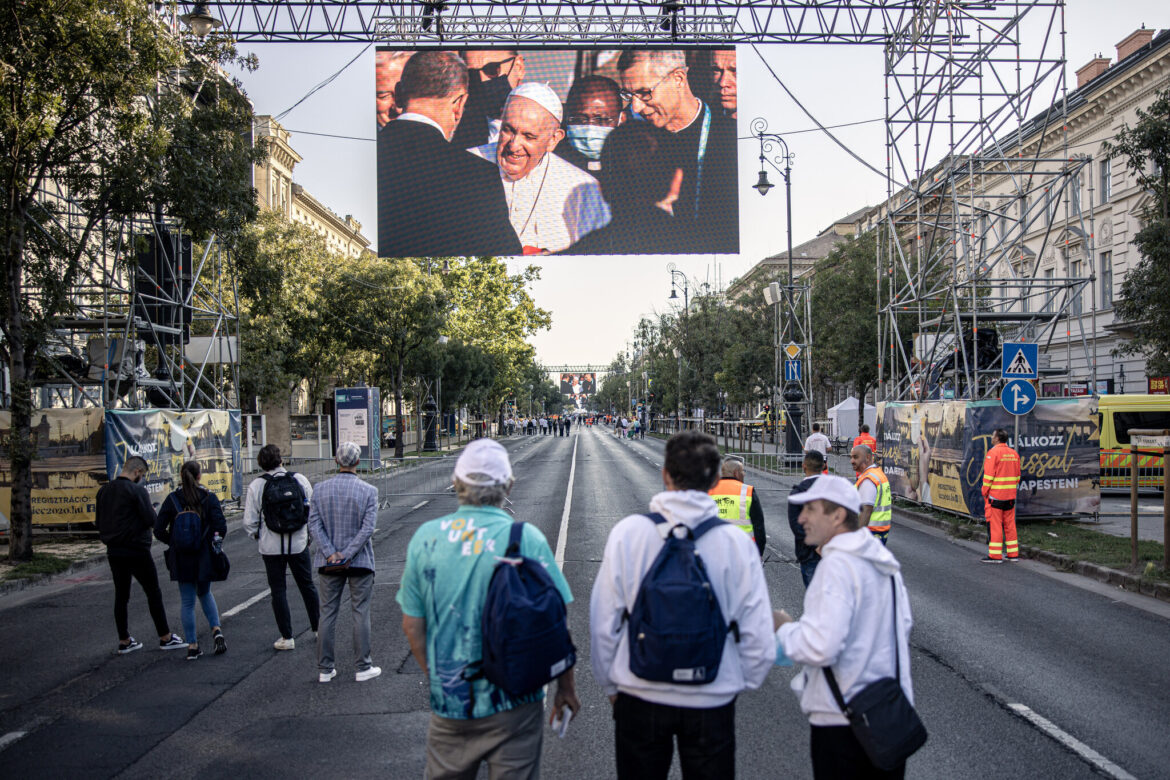 On a quick trip to the country, Francis met with Prime Minister Viktor Orban, Hungary’s hard-right leader, before celebrating a public Mass.

Pope Francis used his short time in Budapest on Sunday to urge his bishops to embrace diversity and send a message to the country’s hard-right, anti-migrant leader, Prime Minister Viktor Orban, that God is not a strongman who silences enemies and that religious roots, while vital for a country, also allow it to open up and extend “its arms toward everyone.”

The seven-hour visit, ostensibly a spiritual layover to celebrate the concluding Mass of a weeklong international conference on the Eucharist, was the first international trip for Francis since undergoing major surgery this summer. It opened a four-day visit to neighboring Slovakia, and the disparity of time spent in the two countries has prompted Hungarian prelates to lobby for a longer stay and allies of Mr. Orban to excoriate the pope, who regularly criticizes “national populism,” for the perceived snub.

Mr. Orban has portrayed himself as a defender of Christian Europe, and he has ramped up connections to church traditionalists, many of whom are critical of Francis, ahead of expected elections in April. Some in the Hungarian church worried that Mr. Orban would exploit the pope’s visit for electoral gain. His government, they argue, has already essentially bought the independence, and the silence, of the church by showering it with many millions of dollars in subsidies.

On Sunday, Francis met for about 40 minutes with Mr. Orban and with other civil authorities in a gaping hall at the Museum of Fine Arts. The pope and his top foreign policy officials sat without masks and at a considerable distance across from Mr. Orban and Hungary’s president, Janos Ader.

But Mr. Orban quickly posted photographs of his greeting Francis on his Facebook page, writing that he had asked the pope “not to allow Christian Hungary to perish.” Hungarian media, where Mr. Orban’s government holds great sway, splashed the picture of the handshake on their home pages and reported that Mr. Orban, who has referred to the influx of migrants to Europe in 2015 as an “invasion,” gave Francis a copy of a letter sent by a 13th-century Hungarian king to the pope at the time. In the letter, the king complained that pleas to the church for help against an invasion from Mongol armies had resulted in only empty words.

The issue of migration apparently did not come up in the meeting, according to the Vatican, but, as anticipated by some of his confidants, the pope addressed the issue head-on in his subsequent meeting in the museum with a group of Hungarian bishops.

“Your country is a place in which people from other populations have long lived together,” he said. “Various ethnicities, minorities, religions and migrants have also transformed this country into a multicultural environment.”

Francis said that at the beginning, “diversity always causes some fear because it puts at risk the acquired security and upsets the achieved stability,” but he added that it was a great opportunity to reach out in brotherhood. “In front of cultural, ethnic, political and religious diversity,” the pope said, “we can have two reactions: close ourselves in a rigid defense of our so-called identity, or open ourselves to meet the other and cultivate together the dream of a fraternal society.”

He said that he wanted the Hungarian church to build new bridges of dialogue, to show, he said, its “true face” and become a “bright symbol for Hungary.”

In Francis’ public remarks — in the Heroes’ Square adjacent to the museum, which was spilling over with tens of thousands of people, including Mr. Orban in a front-row seat — the pope seemed to touch on those issues, if in biblical and religious terms.

Appearing strong after having about 13 inches of his colon removed in early July, Francis, 84, spoke about how religious sentiment, with which Mr. Orban imbues much of his political talk, “not only invites us to be well rooted, it also raises and extends its arms towards everyone.” He said that while it was important to keep the “roots firm,” it was also important to do so “without defensiveness.”

Francis also seemed to warn against the conflating of religion and politics.

“There is God’s side and the world’s side,” he said. “The difference is not between who is religious or not, but ultimately between the true God and the god of ‘self.’ How distant is the God who quietly reigns on the cross from the false god that we want to reign with power in order to silence our enemies.”

On the early plane ride to Budapest from Rome, Francis told reporters that he was happy to be traveling again, as the coronavirus pandemic and his own health challenges had kept him in the Vatican. “If I’m alive, it’s because bad weeds never die,” he joked. In Budapest, he rode in the so-called popemobile along avenues crowded with faithful waving flags. Hardly anyone on the streets, or in the square, or in the city’s bars or restaurants, for that matter, wore masks, and they all crammed closely together.

But Francis took breaks when he could. When, after his meeting with Mr. Orban, he met with Christian and Jewish leaders, he explained that he had to deliver his speech while sitting because “I’m not 15 anymore.”

In that speech, he expressed wariness about “the threat of anti-Semitism still lurking in Europe and elsewhere,” and he frequently used his familiar imagery of building bridges and breaking down walls.

During the pope’s morning meetings, prelates and faithful gathered in the square under hats and white umbrellas to shade themselves from the sun, and five members of the defunct Hapsburg empire, which ruled over Hungary and much of Europe for centuries, stood in a line together on the side of a stage that had been set up for Francis. Mr. Orban has appointed two of them as his ambassadors in the hopes of improving access in Western Europe.

Eduard Hapsburg, Mr. Orban’s ambassador to the Holy See, who worked with the Vatican to extend the pope’s stay, said he had met Francis at the airport. The pope, he said, told him that Hungarian was the language of heaven because it takes an eternity to learn. Mr. Hapsburg said that he had pretended not to know the joke and had laughed.

“I didn’t have the impression of a grim atmosphere,” he said. “It was very cheerful, enjoying very much, and yes, for us it’s incredible.”