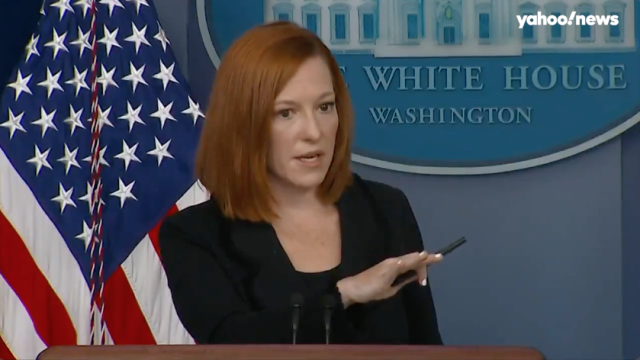 The sight of thousands of migrants from Haiti crowded in miserable conditions under a Texas bridge presents the Biden administration with a new challenge, one that highlights the real-world consequences of the ongoing impasse in Washington over immigration reform.

Images that seemed to show U.S. border guards using reins as whips against the Haitian migrants only added to the sense that the White House was once more overtaken by the rapidity of a worsening situation, as it had been after the fall of Kabul, when thousands of Afghans who had helped the United States rushed Hamid Karzai International Airport in hopes of escape.

Asked Monday about alleged treatment of Haitians seeking asylum in the United States by officers of Customs and Border Protection, White House press secretary Jen Psaki struggled to decry the particulars without also condemning the administration’s own position, which appears to leave little hope for the Haitians now huddled on the banks of the Rio Grande.

“I can’t imagine what context would make that appropriate,” Psaki responded. “I don’t think anyone seeing that footage would think it was acceptable or appropriate.”

Haiti is in the midst of political upheaval caused by the July assassination of President Jovenel Moïse. A month later, a devastating earthquake killed thousands and left an estimated 40 percent of the population in some regions homeless.

The U.S. rebuffed calls from Haiti’s interim government to deploy troops to help secure the nation following the assassination of Moïse, but the Biden administration did send a military contingent to assist in response to the earthquake.

An estimated 12,000 migrants are now under a bridge in Del Rio, Texas, which shares a border with Mexico. But their attempts to find asylum in the United States appear to be in vain, as the Biden administration has begun deporting some of the migrants back to Haiti.

“If Biden continues with these deportations, he’s no better than Trump,” one Haitian deportee told the Washington Post.

Michael Clemens, a senior fellow at the Center for Global Development, said Haitians who had already been living in Central or Latin America were “easy prey for well-established smuggling networks” that falsely promised amnesty once the migrants reached the United States.

An outdated and ineffectual immigration system is to blame, Clemens believes. “Why didn’t they ‘get in line’ and migrate ‘the right way’? Because there is no line,” he says. “The U.S. provides essentially zero lawful migration opportunities accessible to almost all Haitian nationals.”

Biden has not yet addressed the situation in Del Rio, but Psaki’s struggles to answer questions during Monday’s briefing served to illustrate the bind in which the administration finds itself. She had trouble explaining why, for example, Afghan refugees appeared to be receiving significantly better treatment than their Haitian counterparts, or how an administration that had promised a much more humane immigration policy than that of Biden’s predecessor, Donald Trump, had resorted to deportation.

Psaki said the Biden administration would work with officials in Haiti to improve conditions there, but stopped short of offering the migrants entry into the United States. Nor did she say that any border guards who may have used whips on migrants would be fired, even as she acknowledged that the footage of them evidently doing so was “horrific.”

Conservatives seized on the images from Del Rio to paint Biden as an ineffectual protector of U.S. borders, though there is little evidence that his own policies are directly responsible for the influx from Haiti.

Trump, who fashioned himself a border lawman, issued a statement on Sunday seemingly intended to stoke his followers’ outrage. “Our Country is rapidly becoming a cesspool of humanity,” Trump said in his statement. “Murderers, drug dealers, and criminals of all shapes and sizes are a big part of this massive migration,” he added, in a reminder of the xenophobia-laden 2015 speech that launched his quest for the White House.