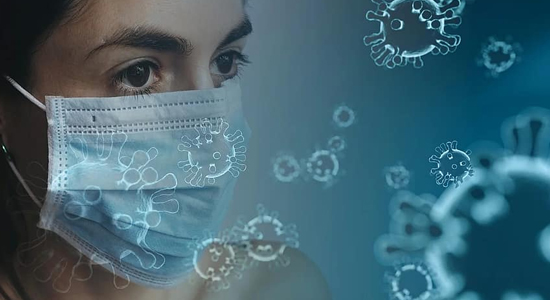 Newer variants of the coronavirus such as alpha and delta are highly contagious, infecting far more people than the original virus. Two new studies offer a possible explanation: The virus is evolving to spread more efficiently through air.

The realization that the coronavirus is airborne indoors transformed efforts to contain the pandemic last year, igniting fiery debates about masks, social distancing and ventilation in public spaces.

Most researchers now agree that the coronavirus is mostly transmitted through large droplets that quickly sink to the floor and through much smaller ones, called aerosols, that can float over longer distances indoors and settle directly into the lungs, where the virus is most harmful.

The new studies don’t fundamentally change that view. But the findings signal the need for better masks in some situations, and indicate that the virus is changing in ways that make it more formidable.

“This is not an Armageddon scenario,” said Vincent Munster, a virus expert at the National Institute of Allergy and Infectious Diseases, who led one of the new studies. “It is like a modification of the virus to more-efficient transmission, which is something I think we all kind of expected, and we now see it happening in real time.”

Munster’s team showed that small aerosols traveled much longer distances than larger droplets and the alpha variant was much more likely to cause new infections via aerosol transmission. The second study found that people infected with alpha exhaled about 43 times more virus into tiny aerosols than those infected with older variants.

The studies compared the alpha variant with the original virus or other older variants. But the results may also explain why the delta variant is so contagious — and why it displaced all other versions of the virus.

“It really indicates that the virus is evolving to become more efficient at transmitting through the air,” said Linsey Marr, an expert in airborne viruses at Virginia Tech who was not involved in either study. “I wouldn’t be surprised if, with delta, that factor were even higher.”

The alpha variant proved to be twice as transmissible as the original virus, and the delta variant has mutations that turbocharged its contagiousness even more. As the virus continues to change, newer variants may turn out to be even more transmissible, experts said.

But the tools at our disposal all still work well to halt the spread. Even loose-fitting cloth and surgical masks block about half of the fine aerosols containing virus, according to the study of people infected with variants, published this month in the journal Clinical Infectious Diseases.

Still, at least in some crowded spaces, people may want to consider switching to more protective masks, said Don Milton, an aerosol expert at the University of Maryland who led the research.

“Given that it seems to be evolving towards generating aerosols better, then we need better containment and better personal protection,” Milton said of the virus. “We are recommending people move to tighter-fitting masks.”

To compare how different variants spread through the air, his team asked participants with mild or asymptomatic infections to recite the alphabet, sing “Happy Birthday” loudly or shout out the University of Maryland slogan, “Go, Terps!”

But the researchers examined only four people infected with alpha, and 45 with older variants. That could skew the observed differences between the variants, said Seema Lakdawala, a respiratory virus expert at the University of Pittsburgh, who was not involved in either new study.

Infected people can pass the virus along to many, many others — or to none at all. How much virus they expel may depend on where in the respiratory tract it is replicating, on the nature of the mucus in its environment and on what other microbes it may hitch a ride with.

“We have really no idea why some individuals are superspreaders and others are not,” Lakdawala said. “There’s a lot of heterogeneity between individuals.”

Data from a greater number of participants would be more convincing, but the two studies together do suggest that enhanced transport through aerosols at least partly contributes to the variant’s contagiousness, she said.

Munster’s study did not involve people at all, but Syrian hamsters. Using the animals allowed the team to control the experimental conditions tightly and focus only on the movement of aerosols, Munster said.

The researchers separated pairs of hamsters with tubes of different lengths that allowed airflow but no physical contact. They looked at how well the different variants traveled from infected “donor” hamsters to uninfected “sentinel” hamsters.

The results were posted on bioRxiv, a website that features papers before they have been published in a scientific journal.

The researchers are now testing the delta variant and expect to find that it is even more efficient, Munster said.

Together, the new findings underscore the importance of masks for vaccinated people, especially in crowded spaces, experts said. Although people with breakthrough infections after vaccination are much less likely to spread the virus than unvaccinated people, the contagiousness of the variants raises the probability.
With billions of people worldwide vaccinated, and billions still unvaccinated, the virus may still change in unexpected ways, Munster said: “There might be additional evolutionary pressures, shaping the evolutionary direction of this virus.”