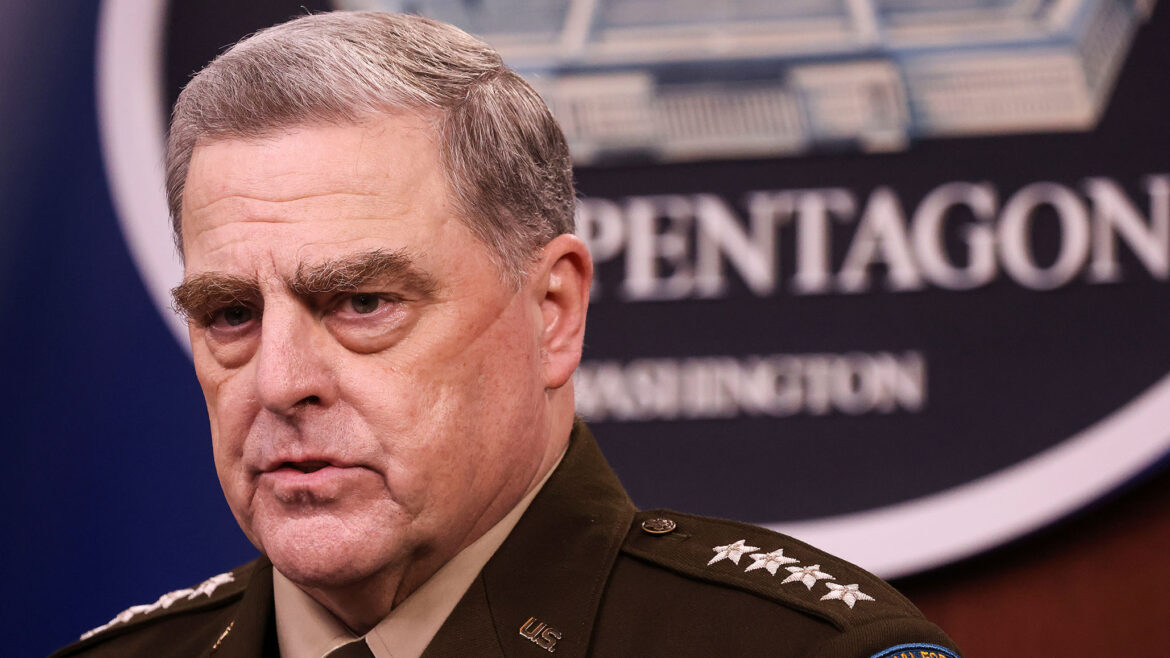 The chair of the joint chiefs of staff sought to prevent the former president from ‘going rogue’, according to new Woodward book.

oe Biden threw his weight behind the top US military officer on Wednesday, saying he had “great confidence” in the general who, according to a new book, took steps to prevent the outgoing Republican president Donald Trump from “going rogue” and launching a nuclear war or an attack on China.

Mark Milley, chairman of the joint chiefs of staff, also defended phone calls he made to his Chinese military counterpart in the tumultuous final months of Trump’s presidency, signaling that the hitherto secret conversations were in keeping with his duties.

“I have great confidence in General Milley,” Biden said at the White House, when asked if the military leader had done the right thing by intervening.

Then, in a written statement, Milley’s spokesman, Col Dave Butler, said the top general acted within his authority as the most senior uniformed adviser to the president and to the secretary of defense.

“His calls with the Chinese and others in October and January were in keeping with these duties and responsibilities conveying reassurance in order to maintain strategic stability,” Butler said, adding that “all calls from the chairman to his counterparts, including those reported, are staffed, coordinated and communicated with the Department of Defense and the interagency.”

The Milley phone calls were described in excerpts that emerged on Tuesday from the forthcoming book Peril by the Washington Post journalists Bob Woodward and Robert Costa.

The book said Milley told General Li Zuocheng of the People’s Liberation Army in China that he would warn his counterpart in the event of a US attack.

“General Li, I want to assure you that the American government is stable and everything is going to be OK … we are not going to attack,” Milley told Li four days before the November 2020 election, according to the book.

The idea that a general would unilaterally intervene to secretly prevent or halt the actions of the president of the United States, who is commander-in-chief of the US military, is extraordinary. Milley served Trump as chairman of the joint chiefs and then continued in the role after Biden entered the White House.

Psaki on Wednesday urged Americans to consider the “key context” in which Milley allegedly took these steps, referring to Trump’s efforts to overturn Biden’s victory in an election called the most secure in US history by officials at local and national level.

“The president has worked side by side with Chairman Milley for almost eight months,” Psaki said. “His experience with him has been that he is a patriot.”

The revelations have led some Republicans to call for Milley’s resignation, accusing him of undermining the constitution by trying to put guardrails on Trump’s behavior during his final days in office.

Woodward, who broke the Watergate stories that ultimately led to Richard Nixon’s resignation as president in 1974, and Costa portray Milley as “certain that Trump had gone into a serious mental decline in the aftermath of the election”.

Milley reportedly thought the president had become “all but manic, screaming at officials and constructing his own alternate reality about endless election conspiracies”.

According to the authors, Milley worried that Trump could “go rogue” and told senior staff: “You never know what a president’s trigger point is.”

On Wednesday, Psaki drew a sharp distinction between the general’s relationship with Trump, who incited a deadly insurrection at the US Capitol on 6 January in hopes of overturning Biden’s victory, and was impeached for it, and his relationship with Biden.

“This current president, who follows the constitution, who’s not fomenting an insurrection, who follows the rule of law, has complete confidence in Chairman Milley and him continuing to serve in his role,” Psaki said.

The Florida Republican senator Marco Rubio wrote to Biden calling for him to “immediately dismiss General Milley” for leaking “classified information on US military operations”.

But regarding such Republican criticism of Milley, Psaki said, “I don’t think the president is looking for the guidance of members of Congress who stood by while the president of the United States and the leader of their party fomented an insurrection and many of them were silent.”

Trump said on Tuesday that Milley should be tried for treason if the report was true, calling the general “Dumbass”.