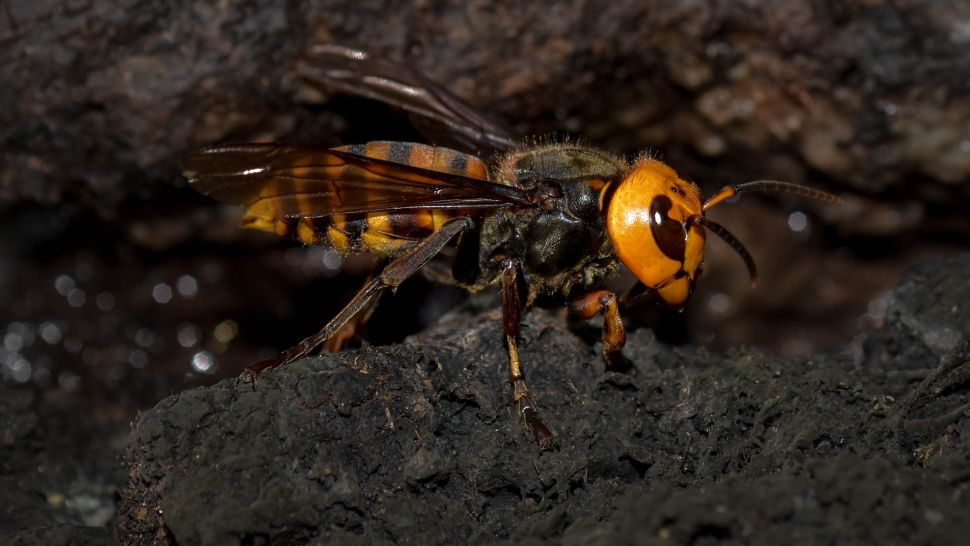 Murder hornets, also known as Asian giant hornets (Vespa mandarinia), are the world’s largest wasps. These hornets naturally occur in Asia, but humans have accidentally introduced them into North America where they pose a threat to native wildlife, as they kill other insects, including smaller wasps and bees.

The name “murder hornet” is widely used online, but it may be sensationalist, according to the Natural History Museum in London. These hornets don’t actively hunt humans but they can kill humans with potent stings if they feel threatened, especially when people are allergic to their venom.

Murder hornets grow up to 2 inches (5.1 centimeters) long, or about the length of a human thumb. They have yellow or orange heads that contrast with their mostly dark brown or black thoraxes — the middle section of their bodies between their heads and abdomens. Their large abdomens have alternating stripes of dark brown or black and yellow or orange, according to the U.S. Department of Agriculture (USDA). Murder hornets have large stingers that are about 0.2 inch (6 millimeters) long.

Murder hornets are omnivores and eat a range of insects, particularly beetles, as well as tree sap and fruit, according to the University of Michigan’s Animal Diversity Web (ADW). The hornets often hunt alone, but they are best known for their coordinated “slaughter” attacks on beehives, where multiple hornets launch an all-out assault on a colony of much smaller bees. During these attacks, up to 20 or more hornets use their mandibles to rip apart the bees guarding the hive and then infiltrate and destroy the rest of the colony.

Honeybees’ stings can’t penetrate hornets’ thick outer skin, but Japanese honeybees (Apis cerana japonica) have a strategy to defend their colonies against these devastating hornet attacks. The bees swarm an invading hornet in unison and trap it in a tight ball of their combined bodies. They then vibrate their bodies together to heat up the ball until it is about 116 degrees Fahrenheit (47 degrees Celsius), which is hot enough to kill the hornet inside but not too hot to kill the bees, Live Science previously reported. Bees living outside of the murder hornet’s natural range, such as North American native yellow bumblebees (Bombus fervidus) and European honeybees (Apis mellifera) —  which aren’t native to North America but help pollinate crops, didn’t evolve alongside the fierce giant hornets and don’t have strategies to defend themselves against murder hornet attacks. This makes the invading hornets more of a threat to them.

Scientists don’t know how murder hornets arrived in North America, but pest response guidelines released by the USDA’s Animal and Plant Health Inspection Service suggest it may be due to the intentional or unintentional illegal importation of live hornets. Murder hornets are consumed throughout Asia for food and used in traditional medicines, and their nests, containing larvae and pupae, are harvested and sold, so it’s possible that some live larvae and pupae were imported and escaped. Another possible route into North America is by murder hornets accidentally stowing away in international freight. Researchers believe that a similar species called Asian hornets, or yellow-legged hornets (Vespa velutina), was accidentally introduced into France when a mated queen made it into international cargo, so this is another possible introduction scenario. Murder hornets were first seen in North America on Vancouver Island in Canada in August 2019.

The hornets were then confirmed to be in the U.S. in December 2019, when the Washington State Department of Agriculture (WSDA) verified two hornet reports near Blaine, Washington, according to the WSDA. Eleven months later, entomologists located and destroyed the first murder hornet nest in Blaine by attaching radio trackers to live hornets they had captured and following them back to their nest, Live Science previously reported.More murder hornets were reported in Washington and Canada in 2020 and 2021. According to a statement released by the WSDA, one dead hornet found near Marysville, Washington, in June 2021 appeared to be unrelated to any of the previously discovered hornets and was therefore from a separate introduction.

Murder hornets are social insects that live together in colonies or nests. All murder hornet colonies begin in spring with one mated queen. Queens feed on tree sap while they look for a good spot to start a colony — usually a cavity or hollow area near the roots of trees, according to the University of Florida. The queen creates comb cells by mixing her saliva with wood fibers and lays eggs in them, which then hatch as white larvae.

The queen feeds her larvae with tree sap, as well as insect and spider tissue she gathers near the nest, until the larvae mature into pupae and then emerge as adults, according to Oregon State University. This process takes about 40 days. The queen initially only produces non-reproductive female worker hornets that take over the maintenance of the colony, including expanding the nest and foraging for food, so the queen can focus on laying more and more eggs.

Males and breeding females, or queens, are born later in the year around the end of October. Males hang out near the entrances to colonies to mate with the new queens as they appear. After a female has mated, she finds a place in the soil to spend winter and remains idle until the next season, when she will emerge and establish a new colony, according to the University of Florida. The queen in the original colony dies around mid-November, and the colony fails soon after without a queen to make more workers. Murder hornet queens live up to one year to give them enough time to establish and lead their colonies. Worker hornets only live from spring until winter, and male hornets live even shorter lives, usually dying after mating with a queen in the fall, according to ADW.

Murder hornets may sting humans who try to pick them up, and will also sting when defending their nest or a beehive they are attacking, according to the WSDA. Their stings are more dangerous than native wasps and bees as they have longer stingers, deliver a larger dose of venom and may sting repeatedly.

Murder hornets don’t usually pose a threat to humans, but their stings may cause a severe allergic response, called anaphylaxis, in some people, similar to other stinging wasps, according to Oregon State University. Humans who suffer a severe allergic reaction can be killed without treatment. In rare instances, a large number of murder hornet stings can also cause people who are not allergic to the stings to suffer organ failure and die. According to a 2007 study published in the journal Clinical Toxicology, murder hornets kill an estimated 30 to 50 people each year in Japan.

The WSDA recommends that people use extreme caution if they are near murder hornets, and people who are allergic to bee or wasp stings should never approach them. If you encounter a murder hornet, you should remain calm and slowly leave the area or, if you are driving, stop the car slowly and open all the windows. If you encounter several hornets at once, the WSDA recommends running away or diving into dense brush for better protection against attacks. A person should promptly seek medical attention if they are stung multiple times and call the emergency services if they experience a severe or anaphylactic reaction, according to the Washington State Department of Health and WSDA.