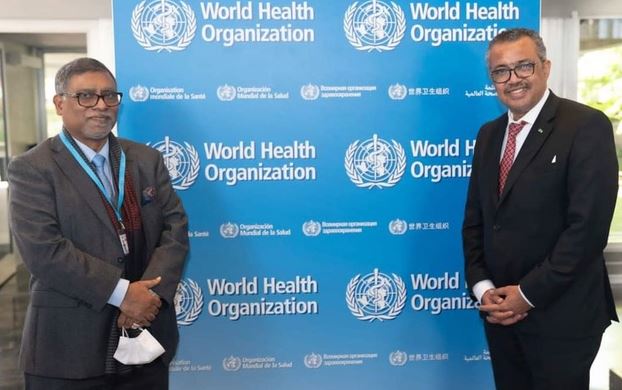 He made the remarks in a statement after a meeting with World Health Organization (WHO) Director-General Tedros Adhanam Gabriasus in Geneva, Switzerland, on Friday afternoon local time.

A statement from the Ministry of Health and Family Welfare on Saturday quoted Health Minister Zahid Malek as saying.

In a statement, the health minister said, “In the first phase of the talks, the director general of the World Health Organization (WHO) has promised to send vaccines to 20 per cent of the country’s people under CoVAX facilities in Bangladesh by December.”

He said work on purchasing coronavirus vaccines from Kovax, an international platform for global vaccine delivery, would continue.

Bangladesh has already given the first dose of vaccine to 33.7 million people. Of these, 16 million have taken the second dose.

During the meeting, the Health Minister highlighted Bangladesh’s success in vaccinating against coronaviruses and highlighted the success of two large-scale successful vaccine campaigns.

Of these, more than 6 million people have been vaccinated across the country on September 26 and about 70,000 people, both public and private, have taken part in the campaign, said Health Minister Zahid Malek.
The statement said that he had assured the Minister of Health that he would take up the matter with the Director-General of the World Health Organization (WHO) if requested to receive more Pfizer and Modern vaccines under CoVAX.

The Health Minister said that in the important bilateral meeting, the Director General of the World Health Organization also assured technical assistance for vaccine production in Bangladesh.

He also said that instructions would be given to expedite the process of accreditation of the ‘Vaccine Testing Capacity of the National Control Laboratory’ of the Department of Drug Administration.