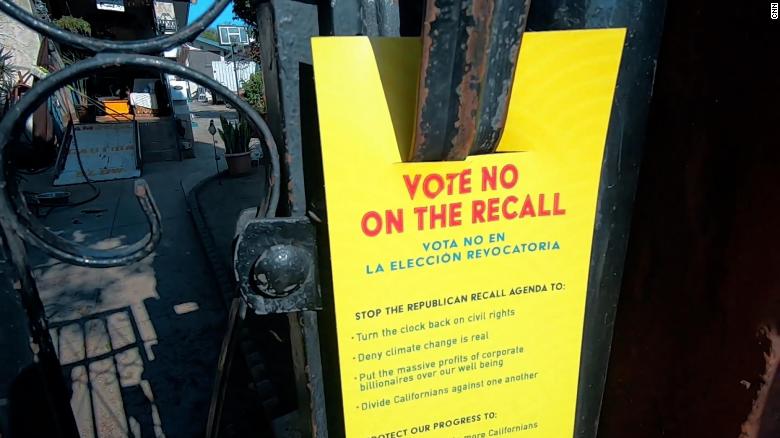 If California Gov. Gavin Newsom is able to keep his job and avoid a recall later this month, he could have Latino voters to thank for it.

A mix of Democratic campaigns, super PACs and organizations throughout the predominantly blue state have been working for weeks to turnout Latino voters for the September 14 recall election, fighting a mix of apathy, anger and confusion in their effort to get what has been a reliable voting bloc for the party to come out for an off-year election.

Latino voters find themselves at the intersection of both the recall and the issue that partially spurred the effort — the coronavirus pandemic and Newsom’s stringent response to it. A series of studies have found Latinos have been the demographic group most adversely impacted by the coronavirus in the state.

“You can’t win California without reaching out to Latinos, so from the get-go there was an effort to connect with Latinos and Latino leaders to emphasize how important the recall was,” said Angelica Salas, the head of CHIRLA Action Fund, an immigrant rights organization that has been working against recalling Newsom. “We are doing everything in our power to defeat this recall.”

Salas, whose organization has had over 20 volunteers knocking doors nearly every day since early August, said her organizers have found some people unsure about why they are having to vote in a nontraditional election year — along with some apathy about the effort.

It’s a problem for Newsom: Given California’s overwhelming Democratic lean, Republicans will need both boosted turnout from their side and depressed turnout from traditionally Democratic voters to have a chance to oust the first-term governor. If the recall passes, voters will be asked on the same ballot to pick from a sweep of Newsom challengers, including Republican Larry Elder, a leading contender on the right who has made fighting Newsom’s coronavirus pandemic orders central to his campaign.
Newsom himself has looked to boost Latino turnout ahead of the recall election, telling Latino leaders on Thursday that echoes of Prop 187 — the now-void 1994 California proposition that barred undocumented immigrants from using a series of public services — is on the ballot with him.
“You brought up Prop 187 — the xenophobia, the nativism. That’s on the ballot September 14,” Newsom said. “I never thought we’d have to live that again.”

‘I don’t think he really understood’
Republicans like Elder are hopeful that frustration with the coronavirus pandemic and the way Newsom has handled the response could lead to his ouster. Newsom, like other Democratic governors, implemented strict rules in response to the pandemic, receiving politically motivated blowback from Republicans who argued he was costing the state vital jobs and business. This blowback was further heightened when Newsom was seen dining indoors at French Laundry, an upscale restaurant in California’s Napa Valley, during the pandemic.
To Gary Montana, a maintenance technician in Los Angeles, the scene smacked of hypocrisy and White elitism.
“I just saw the lack of leadership skills,” the registered independent said. “And that’s what when I thought we needed to recall the governor.”

Issues around Covid are personal for Montana. Every member of his family — nuclear and extended in the state — contracted the virus. As essential workers, like many Latino voters in California, Montana and his relatives kept working or suffered as their employers closed businesses during the stay-at-home orders. “I don’t think he really understood that the average person voted you in,” the technician said. Montana added that his daily schedule is so packed, he doesn’t care much about the recall effort. If he does send in his ballot, he plans to vote for either Elder or former San Diego Mayor Kevin Faulconer.

Latinos make up an estimated 30% of all eligible voters in California, a significant portion that can easily make or break the success of any Democratic politician. Pro-Newsom groups have been running television ads in Spanish urging voters to stop those behind the recall and raising questions about their motives.
This week, the California Latino PAC posted a four-minute video featuring more than a dozen Latino members of the state legislature. The elected representatives equated not voting to a vote for an anti-Latino governor.
“All roads to victory on September 14 are going to lead through Latino neighborhoods in the state of California,” said Kevin de León, a Los Angeles City councilman who previously served in the State Senate as Senate Pro-Tem, at an event in Los Angeles.

And Newsom has relied on support from Latino voters before, too. In 2018, when he won his first term as governor, 64% of Latinos voted for the Democratic candidate, part of a resounding victory that vaulted Newsom to the governor’s mansion.

Newsom’s policies while in office, especially during California’s recovery from the pandemic — which directed aid to Hispanic neighborhoods and businesses — targeted Latinos. But analysts fear working Latinos feel a disconnect between the policies and the governor who has championed them.
Concern about Latinos sitting out the recall election reached their zenith last month when a string of polling came out that suggested a lack of interest among key Democratic voting blocs. Most recent polls, however, show Latino likely voters broadly support keeping Newsom in office. But the concern for Newsom and his top operatives is that voters — including Latinos — will be either unaware of the election or uninterested in casting a ballot at all.