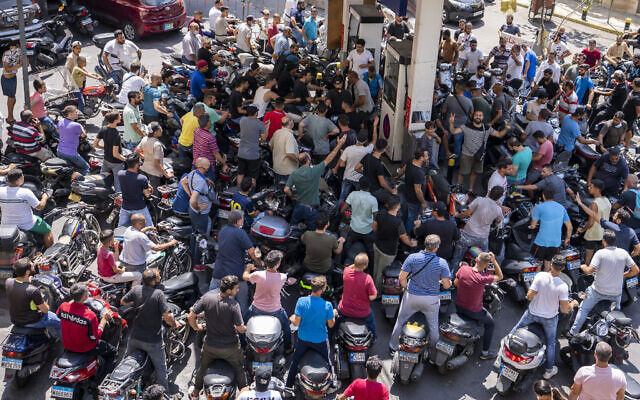 Due to fuel shortages amid financial crisis, al-Zahrani and Deir Amar electricity plants shut down; citizens will have to rely on private generators, which use scarce diesel.

Lebanon faces a nationwide power outage for a number of days after the country’s two largest power stations shut down on Saturday due to a fuel shortage, an official said.

With no state-produced electricity, citizens will have to rely on private generators that run on diesel, which is already in short supply.

“The Lebanese power network completely stopped working at noon today, and it is unlikely that it will work until next Monday, or for several days,” a government official told Reuters.

After the two power plants, al-Zahrani and Deir Amar, ran out of fuel, their separation from the grid lowered national power production to below 200 megawatts, forcing the collapse, the LBCI television network reported.

The state electricity company will try to use army fuel reserves to operate the power plants temporarily, the official told Reuters, but added that it would be unlikely to happen anytime soon.

The country of six million is experiencing its worst-ever financial crisis, with a currency that has lost around 90 percent of its value, people’s savings trapped in banks, and qualified labor emigrating in droves.

It has been described by the World Bank as one of the most severe the world has witnessed since the 1850s.

Lebanon’s ongoing economic crisis is rooted in decades of corruption and mismanagement by the ruling class and a sectarian-based political system that thrives on patronage and nepotism.

Severe shortages in fuel have resulted in crippling power cuts and hours-long waits at gas stations.

Hezbollah’s leader, Hassan Nasrallah, announced in August that Iran was sending fuel to Lebanon to help ease the crisis. The first Hezbollah-commissioned Iranian oil tanker arrived in the Syrian port of Baniyas in September and the diesel was unloaded to Syrian storage places before it was brought overland to Lebanon by tanker trucks, where it was welcomed with celebratory gunfire.

Hezbollah, often accused of operating a state-within-a-state, has been taking part in Syria’s civil war alongside government forces. It manages its own crossing points along the Lebanon-Syria border, away from formal border crossings.

Lebanese Prime Minister Najib Mikati has said the shipments violate Lebanon’s sovereignty and are not approved by his government.

Until Saturday’s outage, utility power was only available a handful of hours a day, forcing businesses and hospitals to scale back operations or shut down completely.

Under another initiative to bring some power to the country, energy ministers from Egypt, Jordan, Syria, and Lebanon earlier last month agreed to a plan to bring Egyptian gas and Jordanian electricity to Lebanon via Syria.