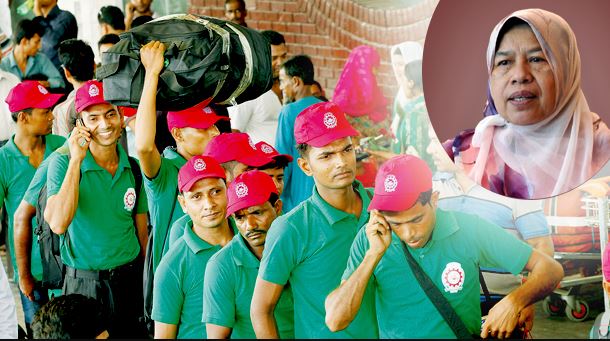 About 32,000 foreign workers, including Bangladeshis, will come to Malaysia in phases from the middle of this month. It has been reported that foreign workers are being recruited to fill the gap in the country’s tree planting sector. In the interest of fair labor migration, recruitment from Bangladesh and other source countries is underway.
Malaysia’s Minister of Industry, Arboriculture and Products Datuk Juraida Kamaruddin told reporters on Sunday (October 3rd) after handing over Kenaf grading standard documents to the National Kenaf and Tobacco Board headquarters in Kelantan state.

The Minister further said that all the workers in countries like Bangladesh and Indonesia have completed their Covid-19 vaccination. Hopefully, it will start coming in phases from the middle of this month. We are hiring foreign workers as our locals are not interested in tree planting. We believe that the locals will gradually become proficient in this.

The country’s Ministry of Human Resources (MOHR) has also drafted the Standing Order of Operation (SOP) and set up a Foreign Workers Quarantine Center near Kuala Lumpur International Airport (KLIA). Where two thousand workers can stay together.

The country has a shortage of manpower in the horticultural sector, including palm oil, which the Ministry of Human Resources has agreed to address. The shortage of workers in the plantation sector has created a risk of loss of national income which is 20 billion ringgit a year, especially in the palm-oil sector.
In this case, he explained that the tree planting sector needs to be filled with foreign workers as there was no response even after the local workers were interested in filling the vacancies.

Meanwhile, Malaysia’s Chinese Chambers of Commerce and Industry (ACCCCIM) has welcomed the decision to hire foreign workers to alleviate the palm orchard labor crisis. They think the move will bring relief to the palm-oil industry and the plantation sector.

Zuraida said SOPs for the foreign workers were still being streamlined by the relevant authorities, such as the National Security Council and the health ministry.

She said major plantation companies were also ready to follow existing SOPs, such as ensuring that foreign workers recruited were fully vaccinated as well as providing suitable places for quarantine as part of efforts to contain Covid-19.

“These companies are also willing to bear the entry costs of workers from abroad, which would speed up their arrival,” Zuraida said.