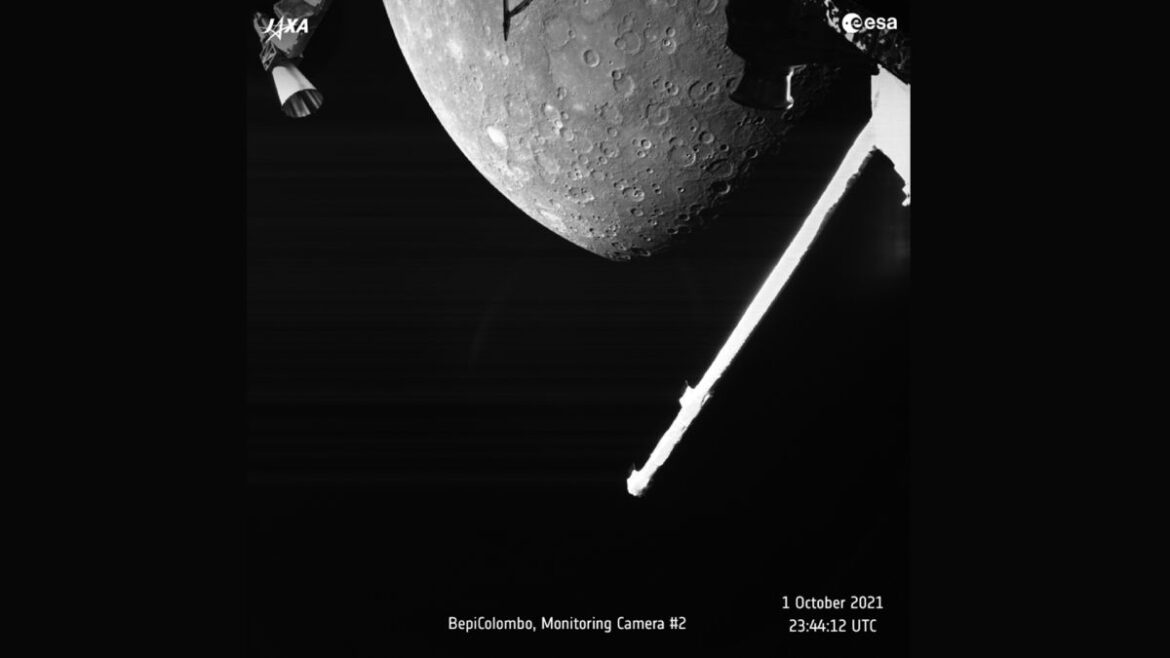 Two spacecraft built by Europe and Japan captured their first up-close look at the planet Mercury in a weekend flyby, revealing a rocky world covered with craters.

The two linked probes, known together as BepiColombo, snapped their first image of Mercury late Friday (Oct. 1) during a flyby that sent them zooming around the planet. The encounter marked the first of six Mercury flybys for BepiColombo, a joint effort by the space agencies of Europe and Japan, to slow itself enough to enter orbit around the planet in 2025.

BepiColombo took its first official photo of Mercury at 7:44 p.m. EDT (2344 GMT) with its Mercury Transfer Module Monitoring Camera 2, a black-and-white navigation camera, as the probe was about 1,502 miles (2,418 kilometers) away from the planet, according to the European Space Agency (ESA). Just 10 minutes earlier, at 7:34 p.m. EDT, BepiColombo made its closest approach to Mercury, passing within 124 miles (200 km) of the planet.

This annotated view of the first photo of Mercury by BepiColombo identifies major craters and other features spotted by the mission’s Mercury Transfer Module Monitoring Camera 2 during a flyby on Oct. 1, 2021.  (Image credit: ESA/BepiColombo/MTM, CC BY-SA 3.0 IGO)

The $750 million BepiColombo mission consists of two different orbiters designed to study Mercury in unprecedented detail with a total of 16 different instruments. ESA’s contribution is the Mercury Planetary Orbiter to study the planet from above while the Mercury Magnetospheric Orbiter, built by the Japan Aerospace Exploration Agency, will study the planet’s magnetic field, plasma environment and dust.

The two orbiters are riding to their target planet on the Mercury Transfer Module on a seven-year trip that began with a launch in 2018. So far, BepiColombo has successfully made four flybys of three different planets: one of Earth in April 2020, two of Venus (in October 2020 and August 2021) and now one of Mercury.