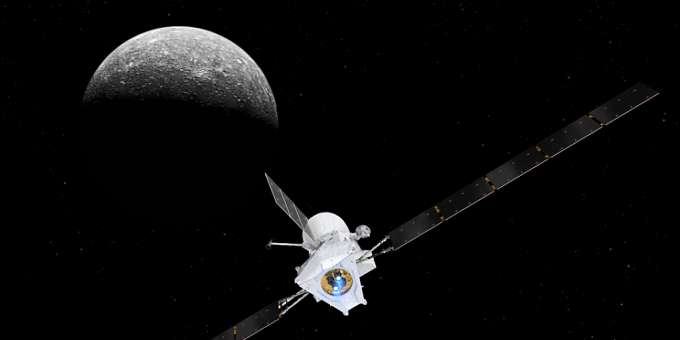 Mercury, the smallest planet in our solar system, is all set for a rendezvous with a spacecraft.

The BepiColombo mission will make its first flyby of Mercury around 7:34 p.m. ET on Friday and pass within 124 miles (200 kilometers) of the planet’s surface. During the flyby, BepiColombo will collect science data and images and send them back to Earth.
The mission, jointly managed by the European Space Agency and the Japan Aerospace Exploration Agency, launched in October 2018. It will ultimately make six total flybys of Mercury before entering orbit around the planet in December 2025.
The mission will actually place two probes in orbit around Mercury: the ESA-led Mercury Planetary Orbiter and the JAXA-led Mercury Magnetospheric Orbiter, Mio. These orbiters will remain stacked in their current configuration with the Mercury Transfer Module until deployment in 2025.
Once the Bepicolombo spacecraft approaches Mercury to begin orbit, the Mercury Transfer Module part of the spacecraft will separate and the two orbiters will begin circling the planet.
Both probes will spend a year collecting data to help scientists better understand this small, mysterious planet, such as determining more about the processes that unfold on its surface and its magnetic field. This information could reveal the origin and evolution of the closest planet to the sun. 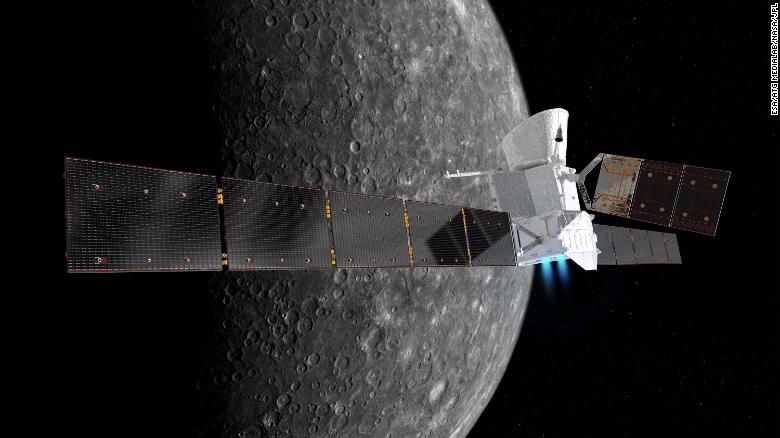 This is an artist’s impression of the BepiColombo spacecraft with Mercury in the background.
During Friday’s flyby, the spacecraft’s main camera will be shielded and unable to capture high-resolution images. But two of the spacecraft’s three monitoring cameras will take photos of the planet’s northern and southern hemispheres just after the close approach from about 621 miles (1,000 kilometers).
BepiColombo will fly by the planet’s nightside, so images during the closest approach wouldn’t be able to show much detail.
The mission team anticipates that the images will show large impact craters that are scattered across Mercury’s surface, much like our moon. The researchers can use the images to map Mercury’s surface and learn more about the planet’s composition.
Some of the instruments on both orbiters will be turned on during the flyby so they can get a first whiff of Mercury’s magnetic field, plasma and particles.
The flyby has a timely occurrence on the 101st anniversary of Giuseppe “Bepi” Colombo’s birthday, the Italian scientist and engineer who is the namesake of the mission. Colombo’s work helped explain Mercury’s rotation as it orbits the sun and enabled NASA’s Mariner 10 spacecraft to perform three Mercury flybys rather than just one by using a gravity assist from Venus. He determined that the point where spacecraft fly by planets could actually help make future passes possible.
Mariner 10 was the first spacecraft sent to study Mercury, and it successfully completed its three flybys in 1974 and 1975. Next, NASA sent its Messenger spacecraft to perform three flybys of Mercury in 2008 and 2009, and it orbited the planet from 2011 to 2015.
Now, BepiColombo will take up the task of providing scientists with the best information to unlock the planet’s mysteries as the second mission to orbit Mercury and the most complex one to date.
“We’re really looking forward to seeing the first results from measurements taken so close to Mercury’s surface,” said Johannes Benkhoff, ESA’s BepiColombo project scientist, in a statement. “When I started working as project scientist on BepiColombo in January 2008, NASA’s Messenger mission had its first flyby at Mercury. Now it’s our turn. It’s a fantastic feeling!”

Little is known about the history, surface or atmosphere of Mercury, which is notoriously difficult to study because of its proximity to the sun. It’s the least explored of the four rocky planets of the inner solar system, including Venus, Earth and Mars. The sun’s brightness behind Mercury makes the little planet hard to observe from Earth, too.
BepiColombo will have to fire xenon gas constantly from two of four specially designed engines in order to permanently brake against the sun’s enormous gravitational pull. Its distance from Earth also makes it difficult to reach — more energy is required to allow BepiColombo to “fall” toward the planet than is needed when sending missions to Pluto.
A heat shield and titanium insulation have also been applied to the spacecraft to protect it from intense heat of up to 662 degrees Fahrenheit (350 degrees Celsius).
The instruments on the two orbiters will investigate ice within the planet’s polar craters, why it has a magnetic field, and the nature of the “hollows” on the planet’s surface.
Mercury is full of mysteries for such a small planet, just slightly larger than our moon. What scientists do know is that during the day, temperatures can reach highs of 800 degrees Fahrenheit (430 degrees Celsius), but the planet’s thin atmosphere means that it can dip to negative 290 degrees Fahrenheit (negative 180 degrees Celsius) at night.
Even though Mercury is the closest planet to the sun at about 36 million miles (58 million kilometers) from our star on average, the hottest planet in our solar system is actually Venus because it has a dense atmosphere. But Mercury is definitely the fastest of the planets, completing one orbit around the sun every 88 days — which is why it was named for the quick, wing-footed messenger of the Roman gods.
If we could stand on the surface of Mercury, the sun would appear three times larger than it does on Earth and the sunlight would be blinding because it’s seven times brighter.
Mercury’s unusual rotation and oval-shaped orbit around the sun means that our star seems to quickly rise, set and rise again on some parts of the planet, and a similar phenomenon occurs at sunset.