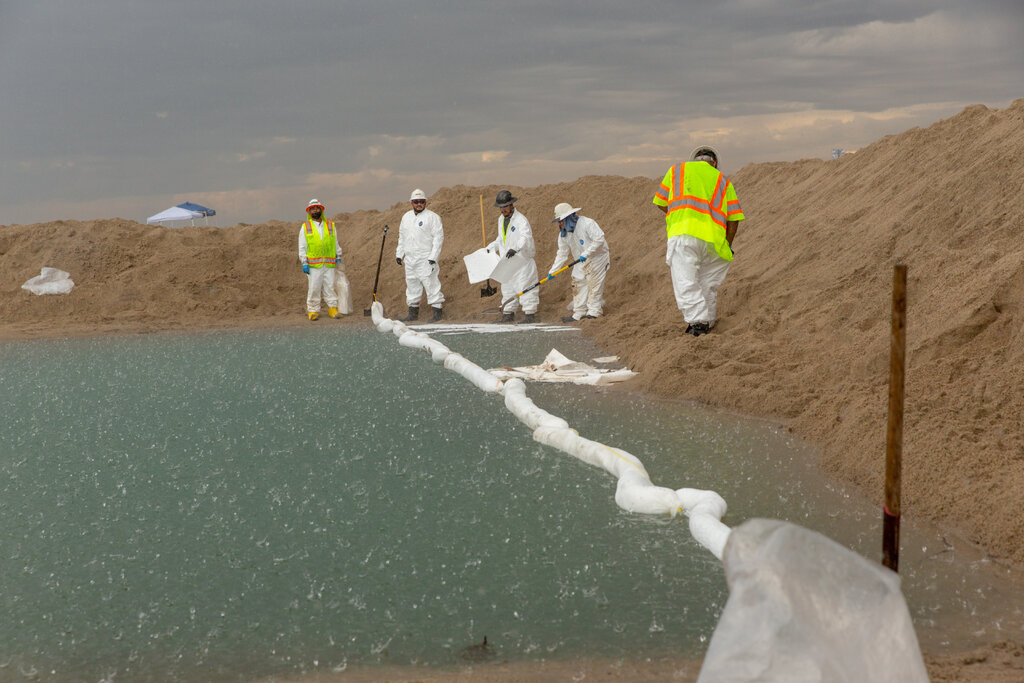 It’s likely that a large vessel’s anchor hit the pipeline, off the coast of Orange County, at some point up to a year ago, the U.S. Coast Guard said.

The pipeline that spilled at least 126,000 gallons of oil into the Pacific Ocean off the California coast may have been damaged up to a year earlier, according to preliminary results of an ongoing investigation, the U.S. Coast Guard said.

Officials have said the leak occurred three miles off the coast of Newport Beach, Calif., and involved a failure in a 17.5-mile pipeline connected to an offshore oil platform called Elly that is operated by Beta Offshore.

The pipeline was intact as of October 2020, according to a routine survey conducted at that time by Beta Offshore, Capt. Jason Neubauer of the Coast Guard said on Friday at a news conference near Los Angeles.

“So that is going to be, for now, our starting point for investigating,” he said.

Investigators are “fairly certain” that an anchor from a “large vessel” struck the pipeline’s concrete casing, and dragged the pipeline more than 100 feet from its original location, Captain Neubauer said.

Other “contributing incidents down the line, either anchor strikes or geological events” may have further damaged that section of the pipeline, Captain Neubauer said.

Investigators are examining the damaged pipeline and the marine growth found on it and are trying to determine what happened, he said.

“From our standpoint, once the initial contact was made, it’s possible there was a small fracture or no fracture,” the captain said. “It would be impossible to tell at this time.”

A telephone message left for Beta Offshore was not immediately returned on Saturday.

The spill created a 13-square-mile slick earlier this month. Dead fish and birds washed ashore as cleanup crews raced to contain the spill, which created an oil slick from Huntington Beach to Newport Beach.

The spill prompted officials to close the beaches in Huntington Beach, where the third day of the annual Pacific Airshow was canceled on Sunday, a day after an estimated 1.5 million people had gathered on the oceanfront to watch the Blue Angels and

Mayor Kim Carr of Huntington Beach said at a news conference on Sunday that the spill was “one of the most devastating situations our community has dealt with in decades.”

A three-million-gallon spill off Santa Barbara in 1969 has been credited with helping to create the modern environmental movement. At the time of the spill there were no federal measures in place to regulate offshore drilling.

In 2015, an onshore pipeline rupture sent more than 100,000 gallons of crude oil mostly into the ocean near Santa Barbara. To restore natural resources damaged by the spill, a $22 million settlement was finalized in October 2020.

Environmentalists point out that oil spills can kill thousands of animals, cost tens of millions of dollars to clean up and contaminate beaches for months.