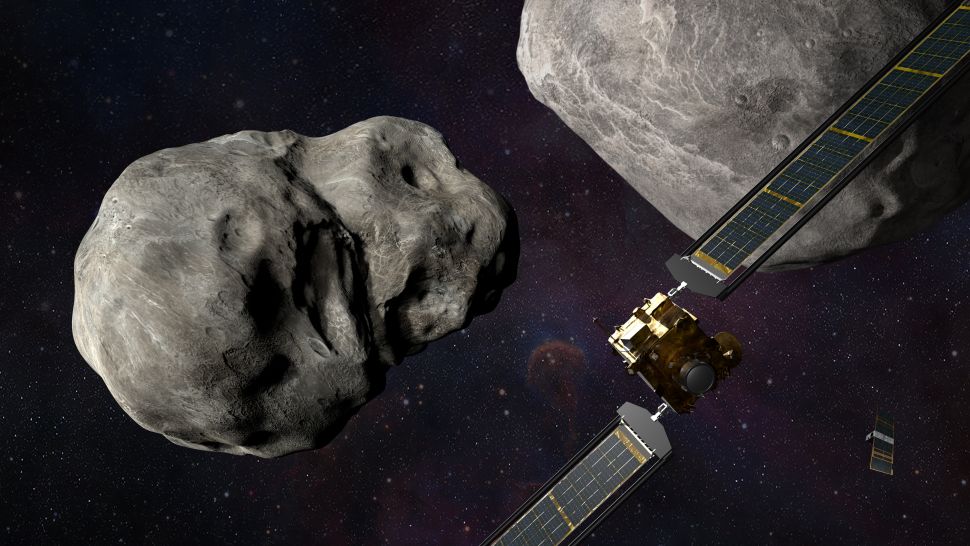 NASA has announced the launch date for an upcoming mission to punch an asteroid in the face with a high-speed spacecraft.

The mission, called the Double Asteroid Redirection Test (DART), is scheduled to launch at 10:20 p.m. PST (7:20 p.m. EST) on Nov. 23, and it could help the world’s space agencies figure out how to divert potentially lethal asteroids from impacting Earth, according to a NASA statement.

DART will test an asteroid defense plan called the kinetic impactor technique — essentially, shooting one or more large spacecraft into the path of an oncoming asteroid in order to change the space rock’s motion. The target is a binary asteroid (two space rocks moving in tandem) called Didymos, which consists of one larger asteroid measuring about 2,600 feet (780 meters) in diameter and a smaller “moonlet” measuring about 525 feet (160 m) across.

NASA will aim for the moonlet, hoping that a direct impact will slow the rock’s orbit just enough that Earth-based telescopes can study the effects in detail.

“It will confirm for us what the viability of the kinetic impactor technique is for diverting an asteroid’s orbit and determine that it remains a viable option, at least for smaller-sized asteroids, which are the most frequent impact hazard,” Lindley Johnson, NASA’s Planetary Defense Officer, told Live Science sister site Space.com earlier this year.

The DART spacecraft is scheduled to launch from Vandenberg Air Force Base in California, riding a SpaceX Falcon 9 rocket through the atmosphere. Once the DART craft separates from the launch vehicle, it will cruise through space for about a year, traveling nearly 7 million miles (11 million kilometers) from Earth before ultimately smacking into Didymos in late September, 2022, according to NASA.

If all goes to plan, the DART craft will crash into the moonlet’s surface at a speed of roughly 15,000 mph (24,000 km/h), obliterating the spacecraft on impact. This high-speed crash will barely phase the asteroid, causing it to lose a fraction of a percent of its velocity, according to NASA.

Still, that minor alteration should slow the moonlet’s orbital period by several minutes, allowing astronomers to study the impact of the mission. A companion spacecraft operated by the Italian Space Agency, called the Light Italian CubeSat for Imagine Asteroids (LICIACube), will attempt to fly nearby and get an up-close look at the action.

NASA closely monitors all known near-Earth objects that could come within 1.3 astronomical units (1.3 times the distance between Earth and the sun) of our planet. So far, the agency has detected more than 8,000 near-Earth asteroids with a diameter greater than 460 feet (140 m) — or rocks large enough to wipe out an entire state if they were to land a direct hit on the U.S. At the moment, none of these objects poses a direct threat to Earth in the next century, NASA officials previously told Space.com.

Austria’s Kurz was the golden boy for Europe’s conservatives. Then came scandal