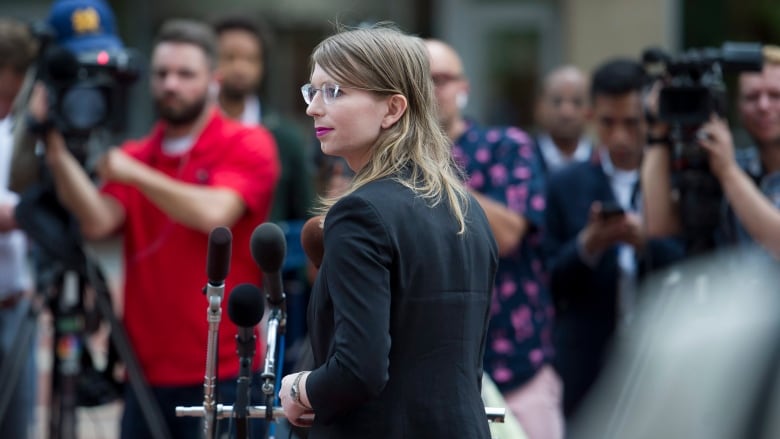 Notorious U.S. whistleblower Chelsea Manning will have to wait until the new year to find out if she is allowed to enter Canada.

The Canadian government is seeking to ban the former intelligence analyst — who was convicted in one of the largest breaches of classified information in American history — from entering the country, arguing that she should be denied entry due to the gravity of her espionage record.

A two-day admissibility hearing in front of the Immigration and Refugee Board wrapped today so that both sides can submit written statements to the tribunal.

The adjudicator indicated her final written decision likely won’t be made until 2022.

Manning’s fight dates back to September 2017, when border officers denied her and argued that if her offences had been committed in Canada, they would “equate to an indictable offence, namely, treason.”

The Canada Border Services Agency can deny entry to any traveller on the basis of “criminal inadmissibility.”

Manning became famous more than a decade ago by leaking hundreds of thousands of classified documents to WikiLeaks, the website founded by Julian Assange, while serving in the U.S. military.

Her actions have attracted both praise and condemnation.

Manning said she wanted to expose what she saw as the U.S. military’s disregard for how the Iraq War was hurting civilians, and that she did it “out of love” for her country.

In 2013, she was convicted of six counts of violating the Espionage Act — which forbids unauthorized people from sharing national defence information — and a handful of other charges, including stealing government property. She was acquitted of the most serious charge against her: aiding the enemy.

In one of his last acts as president, Barack Obama commuted Manning’s sentence in 2017. She was released from military prison after serving seven years of a 35-year sentence.

During her Canadian hearing, Manning’s lawyers argued her American offences are not equivalent to Canadian offences and she should be allowed to enter.

Yesterday, co-counsel Joshua Blum pointed to a provision in the Security of Information Act — Canada’s national secrets law — which includes whistleblower protection in the “public interest.”

Manning’s lawyers also argued her actions were justified by “necessity” and that the public interest in disclosing that information outweighed the harm.

“I was just shocked at how little people knew about how bad the war in particular was,” Manning said Thursday during testimony under oath.