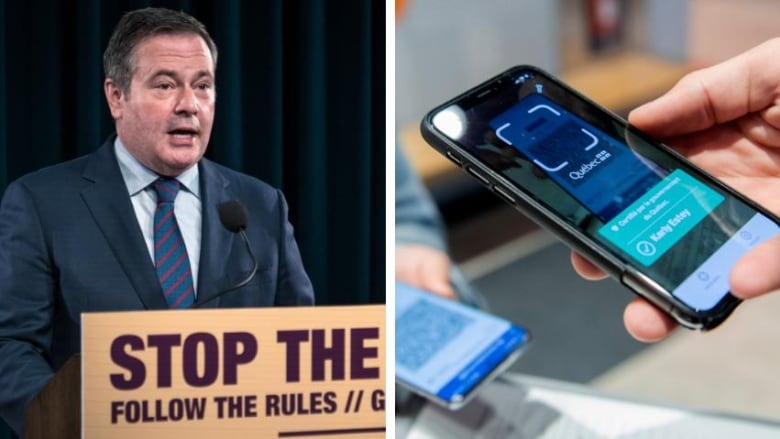 As Alberta Premier Jason Kenney announced financial incentives for the unvaccinated on Friday, a new poll suggests over 75 per cent of Albertans would support a vaccine passport system.

The national survey was conducted by polling and marketing research firm Leger in collaboration with The Canadian Press between Aug. 27 and 29, and included responses from 173 Albertans over the age of 18.

Seventy-seven per cent of Albertans surveyed said they would either somewhat or strongly support a vaccine passport system requiring proof of vaccination for non-essential services such as bars, restaurants, gyms and festivals.

As COVID cases have spiked during Canada’s fourth wave, such systems have been introduced in several provinces, including Quebec, Ontario and British Columbia.

“We found that Albertans are not far out of step with Canadians across the country,” said Leger vice-president Andew Enns.

Lori Williams, an associate professor of policy studies at Mount Royal University, told CBC News she is not surprised by the results.

Alberta’s vaccination rates have flattened in recent months while new COVID cases and hospitalizations have increased.

In other provinces, there has been some evidence that vaccine passport systems motivate unvaccinated populations to get the shot.

For example, the number of people registering for the vaccination program or booking appointments each day in B.C. jumped by as much as 201 per cent in a week.

Instead of a passport system that would introduce more hurdles for Alberta’s unvaccinated population, Kenney announced Friday that the government would offer a $100 incentive for people to get their jabs.

“I wish we didn’t have to do this, but this is not a time for moral judgments. This is a time to get people vaccinated,” Kenney said.

“We have done everything we can. Left no stone unturned … [the unvaccinated] only [get] $100 if they do the right thing and get the jab. We’re going to try everything we can, and this is the next step.”