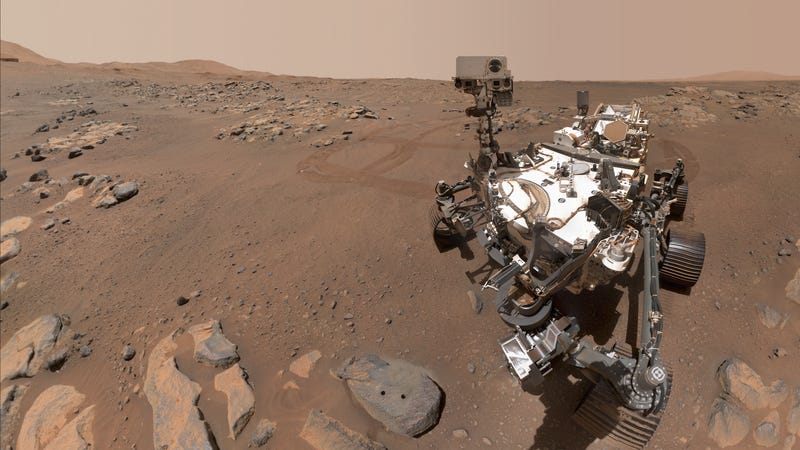 Before Perseverance touched down in Mars’s Jezero Crater in February 2021, scientists’ understanding of crater was shaped by observations from spacecraft, like the Mars Express satellite and Mars Reconnaissance Orbiter. But now, with an operational robot getting its wheels dirty on the ground, an interdisciplinary team of geologists and planetary scientists have been able to make better assessments of the area’s ancient, watery past. Since Perseverance’s main mission is to hunt for signs of fossilized life, this new intel will be crucial in deciding where it should be searching.

There is no stable liquid water on Mars’s surface today—it’s a very cold, very dry world—but in its ancient past, the planet was warmer and wetter. The 28-mile-wide Jezero Crater was once a lake, and though the water has long since vanished, evidence of that water and how it flowed it is laid out in the rock. The recent team’s paper, published today in Science, describes boulders that may hold geologic evidence of the Martian interior. It also details new measurements taken from a butte nicknamed Kodiak, which give clues to a lost environment.

“Findings are two-fold,” said Nicolas Mangold, a planetary scientist at the University of Nantes in France and lead author of the new paper. “First the stratigraphy at Kodiak indicates a past lake but slightly distinct from expectations, and second the presence of boulder deposits at the top of the delta is the most surprising and unexpected finding because those boulders should not occur in a delta lake system,” he wrote in an email to Gizmodo.

The researchers reported over 300 boulders and cobbles; the largest boulders were nearly 5 feet across. The rocks are ancient igneous bedrock that may have broken off the crater’s rim or been transported into Jezero by a river that flowed into it, Mangold said, adding that the boulders do come from flood events, events that might be related to some change of the ancient Martian climate. Previous research indicated large floods on Mars but in Gale Crater, where the Curiosity rover plies its trade.

Ken Farley, a Perseverance project scientist at Caltech and a co-author of the recent paper, described the complexity of the Jezero lake system in a NASA press conference in July:

“One of the hypotheses that we’re trying to test is that the lake that once filled Jezero wasn’t there just once, but that it went through multiple episodes of filling up, drying down, and filling up again,” Farley said. “This is very important because it means we’ll have multiple time periods in which we could possibly learn about environmental conditions on Mars, and we have multiple time periods where we might be able to look for ancient life that might’ve existed on the planet.”

Whether the flooding of Jezero was a routine part of the lake’s behavior or some of the last hydrological activity in the region before it dried up, the researchers don’t yet know. What they have determined is that Jezero’s lake level was about 328 feet lower than previously thought based on orbital observations. Perseverance’s landing site is on the western edge of Jezero, and the rover has been moving west from there, to investigate a fan delta at the crater’s edge.

The rover “was already prepared to reach and cross the fan,” Mangold said, “but now we will pay attention more to the bottom layers where the lake deposits likely are, and the top-most deposits to analyze the boulder-rich unit, and better understand this transition in hydrology.”

Perhaps Perseverance’s grandest task is to seek out and collect evidence of biosignatures, anything that microbial life from Mars’s ancient past may have left behind. Some of the strata analyzed by the team is called “bottomset” (because it’s the stuff that settled at the bottom of a waterlogged Jezero). These finer-grained clays eventually lithified, and its their gentle geology that leads the team to believe this is a good place to look for fossils.

The expectation is that these fossils, if they exist, would look a lot like Earth’s stromatolites, which are fossilized microbial mats created by bacteria. In that way, the fossils should be thought of more as trace fossils; they are stuff created and left behind by long-gone creatures, not the fossilized creatures themselves. Perseverance is endowed with instruments made specifically for this search.

“In my view, the identification of biosignatures, which if present are expected to be small-scale and microbial in origin, will depend upon high-resolution observations made with the WATSON, SHERLOC and PIXL instruments once the rover approaches the delta,” said Keyron Hickman-Lewis, a paleontologist at the Natural History Museum in London and a co-author of the new study, in an email. “Certain microbial structures (for example, microbial mat fabrics) and biological organic materials (biomolecules) should be identifiable if present and preserved.”

To take a step back, it’s astonishing that Perseverance (and its human team!) have discerned so much about the history of Jezero already, and its implications for possible astrobiology, merely from images of the rock formations in the crater. Whether or not biosignatures are found during this mission, just think what scientists will be able to do when, if all goes well, Martian samples arrive on Earth in the early 2030s. It’ll be a brave new world, tucked inside test tubes.