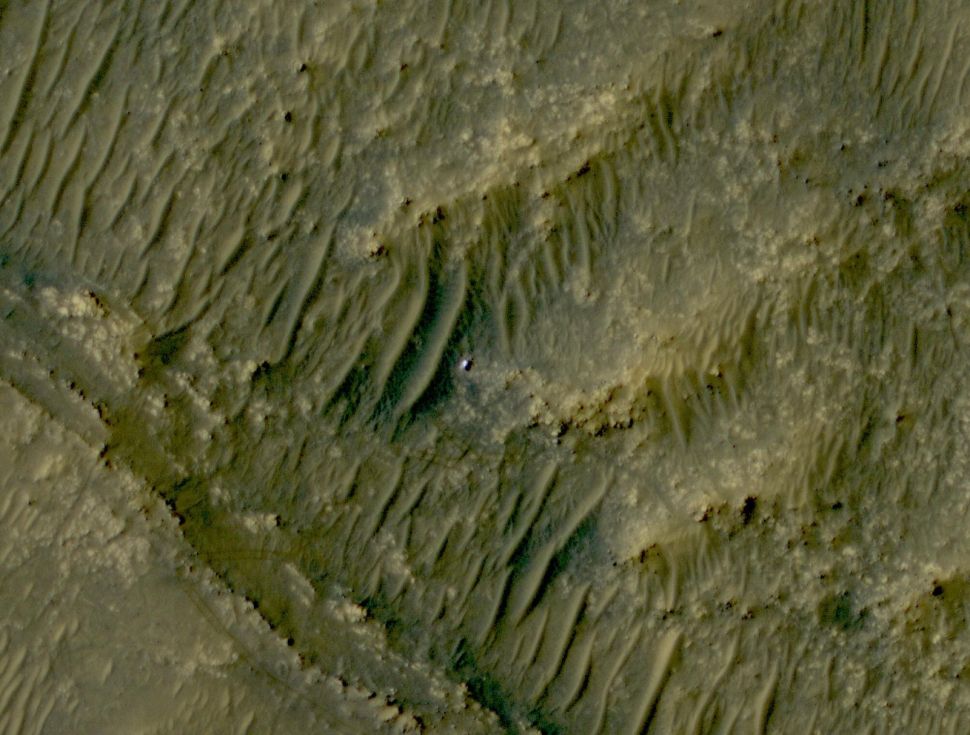 Like a white gumball dropped in the sand, NASA’s Perseverance rover glints amongst the cliffs of Mars in a striking new satellite image.

Perseverance – or “Percy,” to its familiars – has been rolling around Mars’ massive Jezero Crater ever since it completed a death-defying parachute drop onto the Red Planet in February. In this image, captured by the Mars Reconnaissance Orbiter, Percy pushes through the dirt of South Séítah – a series of rocky ridges covered by sand dunes – in order to find a nice, ancient boulder to drill into.

South Séítah (which comes from a Navajo language word meaning “amidst the sand,” according to NASA) sits about 650 feet (200 meters) from the site of Percy’s first successful drilling operation, completed in early September. Targeting a large boulder nicknamed “Rochette,” Percy extracted a pencil-thin core sample, which NASA researchers hope to retrieve and deliver to Earth in a future unmanned mission.

By collecting rock core samples from multiple sites in Jezero Crater, NASA scientists hope to take a broad overview of the planet’s geologic history and past climate, dating back millions to billions of years. The results of this mission could reveal whether or not Mars was ever suitable for hosting life, and could also “pave the way for human exploration of the Red Planet,” according to a NASA statement.Meanwhile, up above, the Mars Reconnaissance Orbiter has been quietly surveying the Red Planet since March 2006, celebrating its 15th year in orbit earlier this year.

Its main mission is hunting for signs of water (past, or present) on Mars, but the satellite never shies away from snapping a pic or two of its robot coworkers. Earlier this year, the Orbiter caught a candid shot of the Curiosity rover scaling the slopes of Mont Mercou, chugging up the hill like the Little Rover That Could.Perseverance, Curiosity and all of NASA’s Mars spacecraft will spend the next few weeks on a break of sorts, as Earth and Mars move to opposite sides of the sun. This Mars solar conjunction happens every two years, according to NASA, and makes direct communication between the two planets a little tricky.