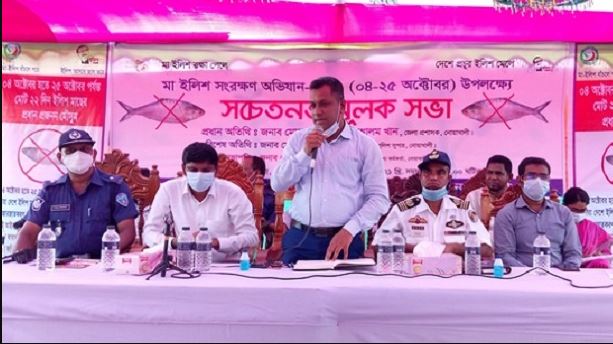 The ban on fishing for mother hilsa in the Meghna River in Noakhali has been in place since October 4. An awareness meeting has been held among the fishermen to prevent them from going to the river and catching mother hilsa.
On Sunday (October 3) afternoon, the District Fisheries Department organized an awareness meeting with local fishermen at the Chairman Ghat of the isolated island Upazila Hatiyar.

District Fisheries Officer Mohammad Iqbal Hossain told the meeting that fishing is banned for 22 days from October 4 to October 25. At that time, procurement, transportation, stocking, marketing, sale and exchange of hilsa fish is completely prohibited and punishable in the whole country. Violators of this law will be punished with a minimum of 1 to 2 years rigorous imprisonment or a maximum fine of Rs 5,000 or both.

District Fisheries Officer Mohammad Iqbal Hossain further said, “All of you have promised us not to go fishing in the river during the ban.” All government facilities for you will be gradually increased.

Ishaq Ali, the officer-in-charge of the Coast Guard, said the country would benefit if it refrained from fishing for 22 days. None of our homes are here. When the breeding of mother hilsa is over, you will catch this fish. So it is the responsibility of all of us to protect mother hilsa at this time.

Naval Police Officer (OC) Nasir Uddin said the naval police would conduct day and night operations during the ban. Security checkpoints will be set up to prevent the supply of hilsa on the roads. If we all show respect for the law, we will get a lot of hilsa after the ban. Everyone must abide by the law during the ban on Jatka conservation.

Akhter Hossain, president of the Hatia Fishermen’s Association, said there were 4,000 fishermen in the three unions but only 652 were registered. Of these, 200 have been brought under rations. He demanded registration and rations for all the remaining fishermen.