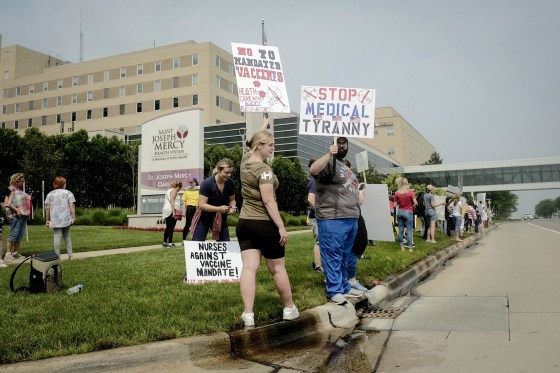 Religious exemptions could prove to be the latest legal battlefield of the pandemic, as Americans opposed to the coronavirus vaccine attempt to find ways around employer and government vaccine mandates.

Some evangelical pastors are reportedly providing religious exemption documents to the members of their church, and right-wing forums are sharing strategies to skirt vaccine requirements. Religious freedom groups are sending threatening letters to states, schools and employers and preparing legal challenges to fight vaccine mandates.

Only some federal agencies and states have made vaccination mandatory for workers, and more private companies are doing or considering the same. But experts anticipate that religious liberty challenges will pick up as more mandates are put in place — especially when there is no national standard.

“There are some First Amendment implications here and there’s a patchwork of laws that could potentially be implicated by these mandates,” said James Sonne, a law professor at Stanford Law School and founding director of its Religious Liberty Clinic. “It’s certainly something we’ll see getting worked out in the courts.”

The challenge for governments and institutions is balancing American civil liberties with a worsening public health crisis.

Experts say that the threshold for religious exemptions could come down to proving whether the person attempting to obtain one has “sincerely held beliefs” against getting vaccinated on religious grounds. They may even have to show a track record of opposition to receive an exemption.

Those challenging employer-created mandates cite Title VII of the Civil Rights Act, which requires employers to make reasonable efforts to accommodate employees, while government-created mandates are being challenged under the First Amendment. Both, however, bring up the question of whether a person’s religious beliefs are sincere.

Thomas Berg, a self-described “strong supporter of religious exemptions” and a religious liberty advocate who teaches law at the University of St. Thomas in St. Paul, Minnesota, said he believes that there is a strong case to deny many of the religious claims and to test religious sincerity.

“In cases where you’ve got a lot of potential insincere claims — and I think there’s evidence that is what’s happening here in which people are raising religious objections when they’re motivated by fear of the vaccine or political opposition to it — testing sincerity makes sense,” he said. “We have to test sincerity or else we have to accept them all or deny them all, so I think the courts will provide room for testing that.”

One driver for testing sincerity is the fact that no major organized religion objects to the vaccine, and Christian, Roman Catholic, Jewish and Muslim leaders have advised followers to get the shot. Pope Francis went so far as to say that receiving the vaccine was “the moral choice because it is about your life but also the lives of others.”