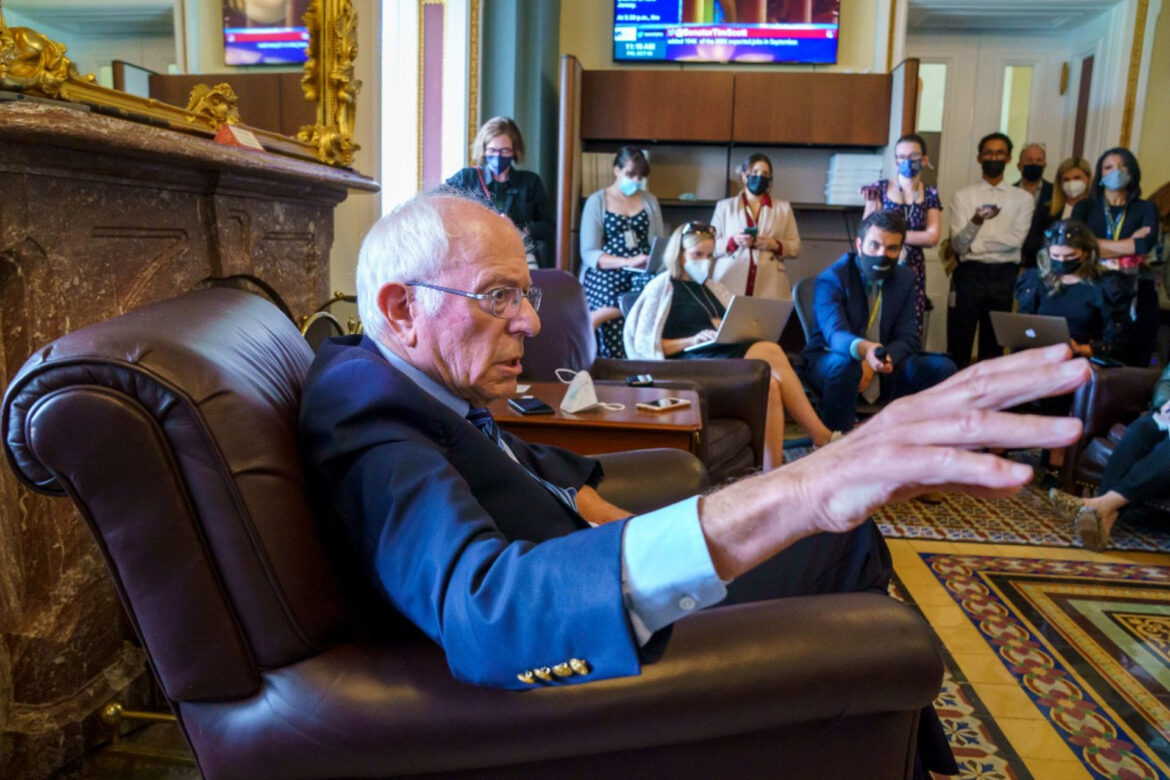 The progressive senator held a second press conference this week and criticized moderates who are holding up Democrats’ broad social spending bill.

Bernie Sanders is sharpening his barbs toward Democrats who have resisted his and President Joe Biden’s agenda.

The Senate Budget chair railed against moderate opposition to a prescription drug overhaul that top Democrats want to include in Biden’s massive social spending package, arguing that centrists rejecting the measures are bankrolled and beholden to the pharmaceutical industry. It was the kind of riposte he’d refrained from making for weeks as a handful of House and Senate moderates refused to support the party’s $3.5 trillion spending blueprint.

“Take a hard look at those people who are opposed to strong legislation to lower the cost of prescription drugs and take a look at their campaign finance reports,” Sanders (I-Vt.) said during a briefing with reporters. “See where they get their money, how many of them get their money from the pharmaceutical industry and the executives there. And I think there will be a direct correlation.“

The Vermont Independent’s comments come after Sen. Kyrsten Sinema (D-Ariz.), a key Senate centrist, told the White House that she‘s opposed to the drug pricing proposals drafted by House Democrats, which could raise hundreds of billions of dollars to help finance Biden‘s party-line bill. A number of House moderates — most of whom have received substantial donations from the pharmaceutical industry and represent districts where drug companies employ thousands of people — also say they’re concerned about the bill’s impact on the development of new cures and therapies, echoing arguments the industry itself is pushing in ad campaigns.

The opposition from House and Senate centrists has been enough to threaten the broader spending package, which Democrats are trying to pass along party lines in the coming weeks. First, Democratic leaders have to secure an agreement between progressive and centrist members of the party on an overall price and framework for the bill, hoping it will allow for movement on Biden’s bipartisan infrastructure package.

“I am going to fight for the strongest piece of legislation that we can,” Sanders said, when asked what he could ultimately accept on drug pricing. “I think I’m going to begin calling out some of those members of Congress.”

Sanders made the remarks at his second press conference this week, held just as the president’s multi-trillion-dollar agenda remains stalled — in large part over confusion as to what key moderates like Sinema and Sen. Joe Manchin (D-W.Va.) will ultimately accept.

Manchin has expressed support for drug pricing reform, praising the idea when protesters recently kayaked up to his house boat. But he has has repeatedly said he’ll only accept a price tag of $1.5 trillion for the bill, or $2 trillion less than the figure House and Senate Democrats have worked with for months.

“It makes no sense at all that we don’t go out and negotiate,” Manchin told reporters this week on drug pricing. “The [Department of Veterans Affairs] does a tremendous job at it. Medicaid does it. Why doesn’t Medicare?”

Sanders held another press conference on Wednesday to scold both Manchin and Sinema for holding up the party-line spending bill. He echoed a lot of the same frustration on Friday, refusing to engage on questions about slashing the overall price tag of the legislation or shrinking its size to appease moderates.

When asked if he should sit down with the two centrists to work things out, Sanders said, “This is not a movie.”

“I’m not here to attack them or question their motives or anything else,” he said. “Manchin’s views, I know, are different than mine.”

“But the point that I’m trying to make … It is simply not fair, not right, that one or two people say, ‘My way or the highway,‘” he added.