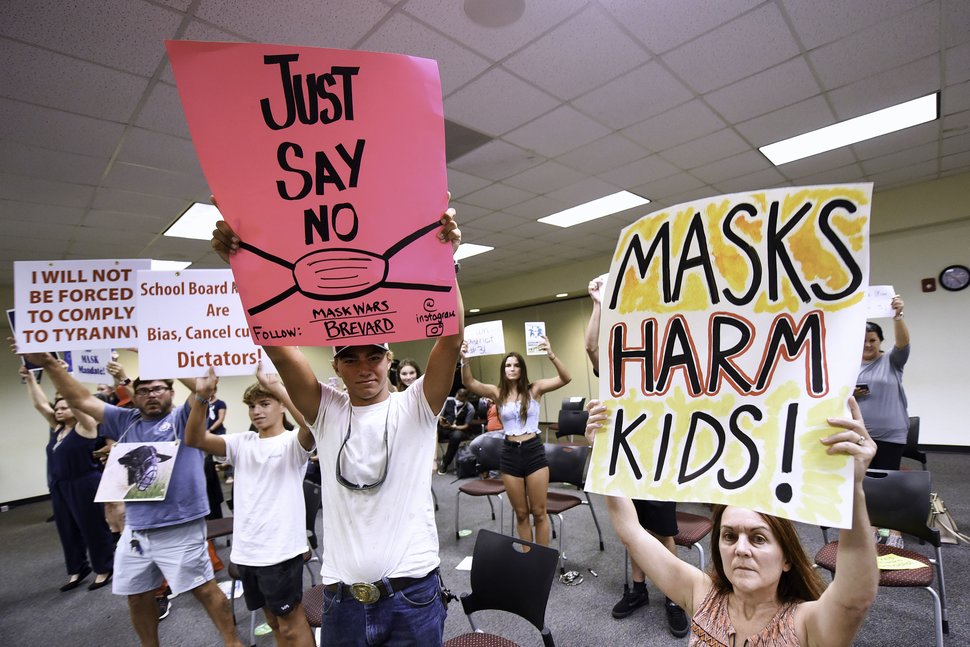 In one of the dozens of videos of school board meetings that have now been viewed millions of times on social media, a man says coronavirus vaccines are a conspiracy by the “deep state” to depopulate the world. In another, a father wearing a hazmat suit invokes the movie “E.T.” in speaking against mask mandates before saying, “This is what Hitler wants.”

In one of the dozens of videos of school board meetings that have now been viewed millions of times on social media, a man says coronavirus vaccines are a conspiracy by the “deep state” to depopulate the world. In another, a father wearing a hazmat suit invokes the movie “E.T.” in speaking against mask mandates before saying, “This is what Hitler wants.”

Last month, after fielding complaints from community members over mask mandates, the school board of a rural district in Oregon voted to terminate a superintendent after he continued enforcing that state’s masking requirements. He had been an educator there for 37 years.

The volatile meetings, where community members regularly rally and demonstrate beforehand, interrupt the proceedings with renditions of the national anthem and gather outside the exits afterward to confront and threaten board members as they leave, are occurring across the country as more than 50 million children begin the new school year against the backdrop of the ongoing pandemic and a highly contagious variant that’s causing transmission, hospitalization and death rates to spike across the country.

The desperate parents, besieged by a steady stream of misinformation and whipped into a frenzy by conservative provocateurs who wax about the loss of freedoms and stoke fears of indoctrination by liberal ideologues, are the minority. But they are the loudest, and they are showing up to school board meetings in droves to oppose mask mandates, vaccinations and the return to virtual learning – even as the government’s top public health officials say they are seeing a concerning increase in pediatric cases and hospitalizations as a result of the delta variant’s increased transmissibility. And it’s exactly what GOP operatives hoped would happen.

“Your time is soon up,” Charlie Kirk, founder of Turning Point USA and chairman of Students for Trump, told school board members in Scottsdale, Arizona, where he spoke last month against mask mandates. “The people of this state and this school district are rising up. There are recall measures in place. You have awoken a sleeping giant.”

Pandemic-related debates over masks, vaccines and school reopening plans aren’t the only issues drawing parents and other residents to school board meetings. So, too, are policies surrounding the rights of transgender students and the perceived threat of critical race theory – a graduate school-level academic framework used to describe how racism is embedded in all aspects of American life, which research shows is not being taught in K-12 schools. The two issues draw protests even when they’re not on the docket for discussion.

The flare-ups are being driven almost entirely by Republicans looking to exploit the politicization of such issues to fire up the party’s base ahead of the 2022 midterms.

“There are certain folks at the national level who are waiting to see what sticks against the wall knowing there’s another upcoming election,” says Chip Slaven, the interim executive director and CEO of the National School Boards Association. “They are taking all these issues and really focusing on school boards and school board members. That is leading to this very charged atmosphere.”

So far, their persistence has led to a series of bills aiming to outlaw masks and vaccine mandates and school closures, ban the teaching of critical race theory and contentious talks about racism, discrimination and privilege and block transgender students from playing sports.

Seeing the staying power, conservative political groups are pouring money into school board races in states where they’re hoping to claw back suburban voters who fled the party during the 2020 presidential election. Ballotpedia, a nonpartisan site that tracks elections and campaigns, reports that recall efforts to oust local school board members have increased dramatically, going from 29 efforts to 54 this year so far. The current tally affects 135 officials, by Ballotpedia’s count, and nearly two-thirds of the recalls were rooted in pandemic-related issues.

“There’s a concerted plan to go after local governments,” says Ron Filipkowski, a Florida attorney and lifelong Republican who resigned from 12th Circuit Judicial Nominating Commission last year, calling the handling of the pandemic by Gov. Ron DeSantis, who appointed him, “reckless and irresponsible.”

“These are the soft targets,” Filipkowski says. “These are the people who don’t have a lot of protection and they are easily influenced. It doesn’t take many people to move the needle in a local race.”

He says that’s been the goal for a handful of influential Trump supporters in the wake of the Jan. 6 insurrection.

“That was the plan,” he says. “They were going to focus our attention away from D.C. and toward local bodies.”

Meanwhile, groups like Turning Point USA, Conservative Political Action Conference, the Club for Growth and other cash-flush and powerful GOP kingmakers are hosting national panels braiding the issues together in pursuit of school choice policies that pull students and their families out of the public school system. Earlier this month, Kirk launched the School Board Watchlist, a site he says is “at the frontlines in the battle to reclaim our schools” and hold district leaders accountable for “dangerous agendas.”

In reality, nothing could be further from the truth.

School boards are typically nonpartisan, hyper-local elections that deal very specifically with wonky education issues and school budgets. They work on teacher shortages, closing the digital divide and getting more funds for students with disabilities. The majority of them are completely volunteer or receive very little for their service.

As it relates to the pandemic, Slaven says, school board members are doing everything they can to keep students and teachers safe as the delta variant scrambles well-laid back-to-school plans.

Indeed, outbreaks have already forced thousands of students and teachers into quarantine, and nearly 700 schools in 158 districts across 25 states have either returned to virtual or hybrid learning models, temporarily closed without a remote option or delayed the start of the school year, according to Burbio, an organization that’s tracking school reopenings amid the pandemic.

While symptomatic and severe cases in children remain less common than for other age groups, states and counties with mask-optional policies and where vaccination rates remain low are experiencing a harrowing increase in cases among kids.

In Florida, more than 26,000 children tested positive just this past week. Children under the age of 12 are now the age group with the highest new COVID-19 case count there. And in Georgia, cases in children 11 to 17 years old have quadrupled over the past few weeks since schools reopened. And according to the state’s public health officials, Georgia is experiencing the highest number of COVID-19 outbreaks since the pandemic began – more than half of which are connected to K-12 schools.

“I think what you’re seeing is a minority, but a very local one,” Slaven says about the outrage on display at school board meetings. “What school board members need is those in their community who support their decisions to start speaking up more and supporting them as they make these tough decisions.”

“I’ve been telling them to keep the faith, make the decisions you think you need to make and go forward,” he says. “School board members are just coming to do their jobs. They’re not out to get anyone. They’re out to help their local schools.”