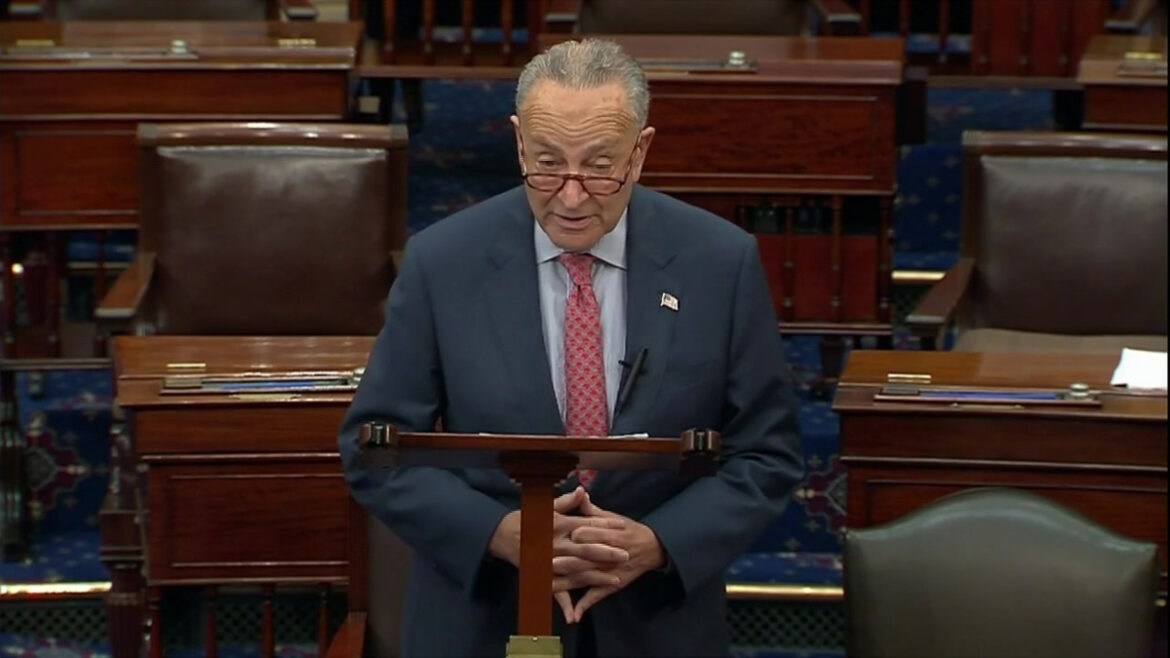 Senate Majority Leader Chuck Schumer announced Wednesday night that Democrats had reached an agreement with Republicans on a stopgap bill to keep the government funded through early December and will vote Thursday on the measure to avert a shutdown.

“We have an agreement on the CR — the continuing resolution to prevent a government shutdown — and we should be voting on that tomorrow morning,” Schumer said. The stopgap bill will include emergency funding for natural disaster relief and to assist in Afghan refugee resettlement, the New York Democrat said earlier.
The clock is ticking with government funding set to expire on Thursday, but Schumer said the Senate “can approve this measure quickly, and send it to the House so it can reach the President’s desk before funding expires midnight tomorrow.” The House is expected to take up the measure once the Senate has acted.
The effort to prevent a shutdown has in recent days been caught up in a fight over how to address a looming debt limit crisis. Democrats initially attempted to pair the two fiscal issues — the debt limit and government funding — and pass legislation that would resolve both, but that ran aground in the Senate due to GOP opposition.
Republicans have said they would support a “clean” stopgap funding bill that does not include a debt limit provision, arguing that Democrats must address the debt limit on their own without GOP votes. Democrats have pushed back, saying that addressing the debt limit is a shared bipartisan responsibility.
In the face of GOP opposition to combining the two issues, Congress now appears poised to pass a “clean” funding bill without the debt limit attached. Schumer said Wednesday that once they fund the government, Congress still needs to “address the urgent matter of extending the debt ceiling.”
He said that Democrats are working to find a solution to avoid a default, but “Republicans have stymied us at every opportunity.” It’s still not clear exactly when the Senate will vote on the stopgap bill to keep the government open — and when it will make it to the House for a vote.
House Speaker Nancy Pelosi told reporters Wednesday afternoon that she does not believe the government will shut down Thursday night and that the House will pass a stopgap bill to fund the government.
“No, I do not,” the California Democrat said when asked if she believed the government will shut down late Thursday. “I think we’ll have a big vote tomorrow,” the speaker added. In his floor remarks, Schumer repeated his strong criticism of Republican Minority Leader Mitch McConnell and the Senate GOP for opposing helping Democrats raise the debt ceiling. “If we always let the debt ceiling lapse because one party or the other didn’t like some future action that the other party would take, we’d never do it. It’s an absurd argument,” Schumer argued.
Treasury Secretary Janet Yellen has warned that the federal government will likely run out of cash and extraordinary measures by October 18, leaving Congress with little time to act to stave off what would likely be a catastrophic default.
Democrats do have the option to raise the debt limit on their own using a process known as budget reconciliation, but Schumer has argued that route is too risky.
Schumer reiterated his warning on Wednesday that going down the path of using reconciliation is “very risky” and “could well lead us to default.” With Republicans strongly opposed to helping Democrats in any way to suspend the debt ceiling, it leaves in doubt how Congress will address the looming crisis in the next few weeks before the US would default on its debt.
“In solving this crisis, this body cannot and will not go through a drawn out unpredictable process sought by the minority leader. It risks the full faith and credit of the United States,” he said. “To do this through reconciliation requires ping ponging separate bills back from the Senate and the House. It’s uncharted waters. Individual senators could move to delay, delay and delay. It is very risky and could well lead us to default.”
Still, Republicans say that the budget process for Democrats to raise the debt limit would take only one to two weeks.
For now, both parties are waiting to see if the other will blink as the political brinksmanship intensifies and the stakes grow higher.