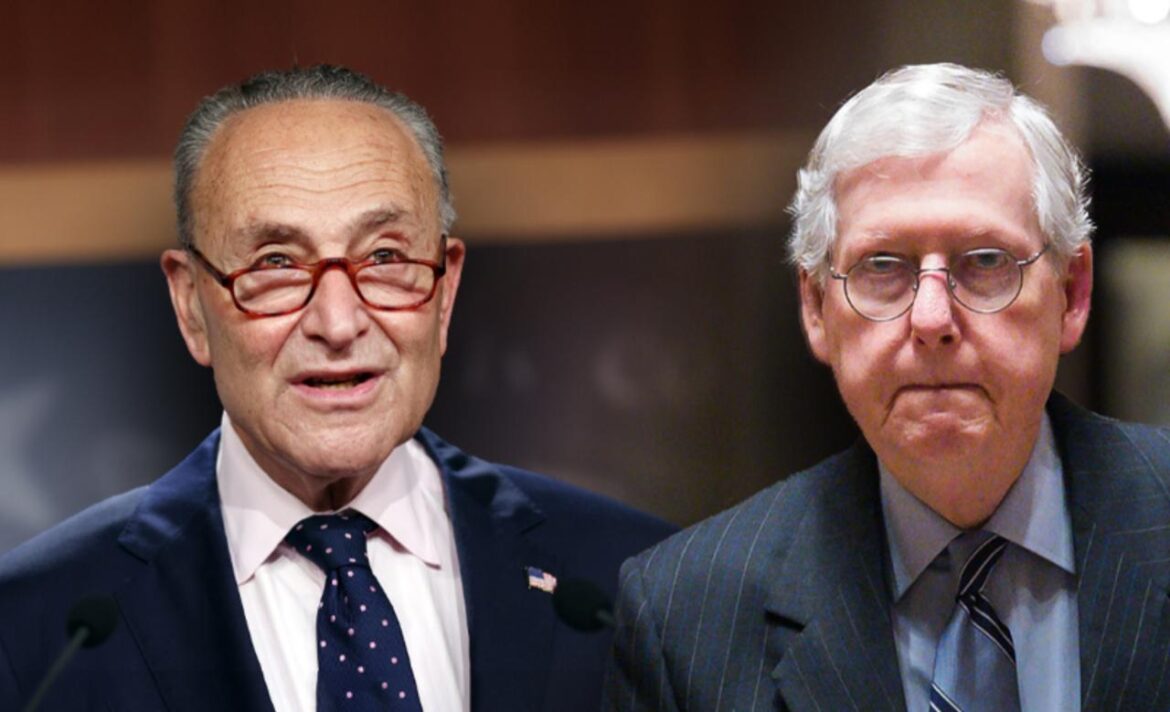 Top Republicans in the Senate are advancing a campaign of disinformation over the debt ceiling as they seek to distort the reasons for needing to raise the nation’s borrowing cap, after they dropped their blockade on averting a US debt default in a bipartisan manner.

The Senate on Thursday passed a bill to allow the debt ceiling to be raised by $480bn through early December, which the treasury department estimates will be enough to allow the government to temporarily avert an unprecedented default on $28tn of debt obligations.

The Senate majority leader, Chuck Schumer, announced the morning before its passage that he had reached a deal with the Republican Senate minority leader, Mitch McConnell, to clear the way for the vote on a short-term extension with GOP support.

The movement came after McConnell made a tactical retreat to back down from weeks of refusal to allow Democrats to raise the debt ceiling by any measure other than through a complicated procedure known as reconciliation that would have required a party-line vote.

And some Republicans railed against what they saw as an unnecessarily triumphalist victory speech by Schumer after the deal, while the West Virginia Democratic senator Joe Manchin put his head in his hands during the address and later called it “inappropriate”.The House speaker, Nancy Pelosi, and majority leader, Steny Hoyer, will set up a vote on Tuesday on the bill passed on Thursday evening, bringing the House back from recess a week early.But even as McConnell struck the accord to stave off the threat of a first-ever default, the resolution to punt the issue until December did nothing to address the crux of the partisan stalemate and Republicans’ mischaracterization of the issue.

The argument at the heart of the GOP’s insistence – which is likely to resume in two months’ time – is that Democrats should raise the debt ceiling on a party-line basis, in part because they claim the borrowing cap needs to be lifted to pay for Biden’s economic agenda.

“McConnell told them they are going to have to – if they are determined to spend at least $3.5tn more in borrowed money – lift the debt ceiling to accommodate that debt by themselves,” the Republican senator John Cornyn said of McConnell at a recent news conference, referring to Democrats’ social spending plan.

The treasury department acknowledges that raising the debt ceiling would allow the US to continue borrowing in order to finance projects, such as Democrats’ social spending and infrastructure package that is expected to now cost between $1.9tn and $2.2tn.

But economists at the department also say that attempts to portray the need to tackle the debt ceiling as an effort to pay for Democrats’ budget resolutions that are yet to pass Congress amount to disinformation, according to sources familiar with the mechanism.

The criticism comes primarily because the overriding reason for raising the debt ceiling stems from the fact that the US needs to borrow new money to pay the principal and interest on about $8tn of debt incurred over the course of the Trump administration.

In recent years, the majority of the increase in the national debt has come at the hands of Republicans, and lifting the debt ceiling merely allows the treasury department to pay existing debts by taking on new debts, the sources said.

The mischaracterization by top Senate Republicans is emblematic of the party leadership’s approach to once non-partisan issues as it seeks to shield its members from being punished at the ballot box in 2022 by red state voters for lifting the debt ceiling.

McConnell had insisted for weeks before caving on Wednesday that Democrats should have to tackle the debt ceiling on a party-line basis through reconciliation, repeatedly blocking measures that would have required at least 10 Republicans to vote for a debt limit hike.

The Republicans’ minority leader first mounted a filibuster against a stopgap funding measure that both prevented a government shutdown and a default, as well as against a standalone bill to raise the debt ceiling as he sought to insulate Republicans from a tough vote.

But Democrats ruled out using reconciliation, concerned about the scheduling difficulty and potential for abuse of the two so-called vote-a-ramas – where Republicans could offer unlimited amendments and poison pill bills – before the fiscal deadline of 18 October.

The prospect of a default this October carried calamitous consequences: economists forecast an immediate recession, a meltdown in financial markets, with trillions wiped off US household wealth and sent unemployment rates surging.

The weeks-long Republican intransigence to block any measure that raised the debt ceiling on a bipartisan basis also reflected the hypocrisy of the Republican position, Democrats said, noting they helped Republicans to tackle the debt without drama during the Trump-era.

And on Wednesday, it was only when Democrats started to call for Schumer to explore carving out an exception to the filibuster to pass a standalone debt bill that would have cut Republican power in the Senate that McConnell agreed on a bipartisan proposal.

“The argument made yesterday was that this may be more pressure than two Democrat senators can stand regarding changing the filibuster rules,” the Republican senator Lindsey Graham said of McConnell’s deal to defuse moves to even partially abolish the Senate rule.