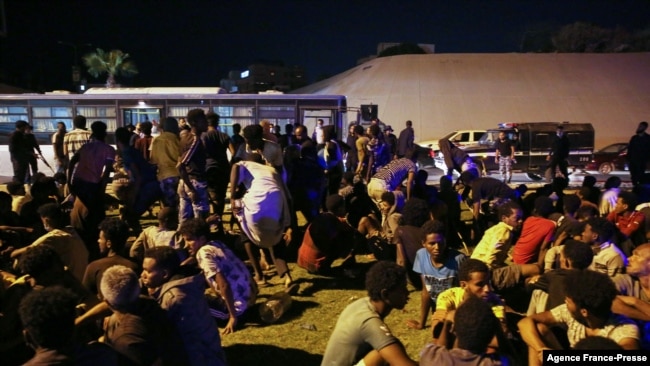 At least six migrants were shot dead at a Tripoli detention centre on Friday, the head of the U.N. migration agency’s Libya mission said, as many reportedly escaped from the facility and others gathered in nearby streets.

Overcrowding triggered chaos at the Ghot Shaal center, with people sleeping in the open and different security forces present, said Federico Soda, the Libya mission head for the International Organization for Migration (IOM).

“Shooting started,” he said, adding that at least six people had been killed.

Libyan security forces have cracked down on migrants, refugees and asylum-seekers over the past week, detaining more than 5,000.

There are hundreds of thousands of migrants in Libya, some seeking to travel to Europe and others coming to work in the major oil exporter.

They routinely face violence in a country that has had little peace for a decade, with many held in detention centers that the U.N. refugee agency, UNHCR, said were crowded and unsanitary, and where Amnesty International on Friday said they face torture and sexual abuse.

Libya’s Government of National Unity was not immediately available for comment.

A decade of strife

The country has been in crisis since the 2011 NATO-backed uprising against Moammar Gadhafi, and much of it is controlled on the ground by local armed forces that operate independently of the government.

Numerous videos posted on social media on Friday, which Reuters could not immediately authenticate, showed dozens of people pouring through a gap in a fence, and larger numbers marching through Tripoli streets.

Two residents said they had seen large numbers of migrants running through the streets in that area.

Soda said security forces in Tripoli had detained at least 900 migrants later Friday, a group that likely included many of those who had fled the detention center.

A Reuters journalist who had seen dozens of migrants sitting on the floor surrounded by guards said that there was a very heavy security presence around the area and there had been sporadic sounds of shooting.

UNHCR said earlier on Friday that it was increasingly alarmed about the situation for migrants and refugees in Libya after more than 5,000 had been arrested in the recent crackdown.

“The raids, which also involved the demolition of many unfinished buildings and makeshift houses, have created widespread panic and fear among asylum-seekers and refugees in the capital,” it said in a statement.

On Monday U.N. investigators said abuses against migrants and refugees in Libya were “on a widespread scale … with a high level of organization and with the encouragement of the state … suggestive of crimes against humanity.”