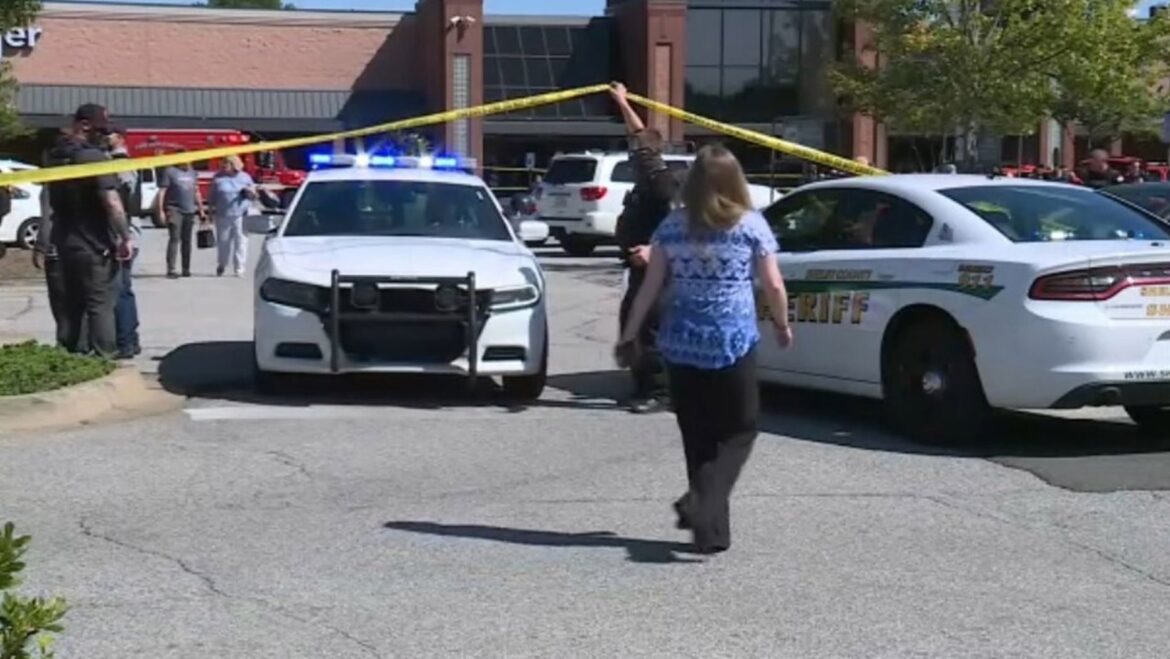 Thirteen people were shot, two are dead in what Police Chief Dale Lane called “the most horrific event that’s occurred in Collierville history.”

One of the two dead is the shooter, who died by a self-inflicted gunshot wound, Lane said.

Law enforcement are still working some active scenes, including waiting on equipment to search the shooter’s car and some property of the shooter.

Part of the ongoing investigation is the shooter’s connection to Kroger, Lane said.

“It’s with a broken heart that I have to stand before you today,” Lane said. “Please keep the families in your prayers.”

Dispatchers received the call of an active shooter situation at the Kroger located at 240 New Byhalia Rd. at 1:30 p.m. Thursday. The first police car arrived on scene at 1:34, Lane said, and officers began clearing the Kroger, aisle to aisle and room to room.

Lane said he did not know how many people were in the store at the time of the shooting, but that there were quite a few witnesses.

“We found people hiding in freezers and in locked offices,” Lane said. “They were doing what they had been trained to do. Run, hide, fight. I hate that we had to do it here.”

One Kroger employee was rescued from the roof, he said.

Lane would not describe what kind of weapon the shooter had.

At about 3:40 p.m., a spokesperson from Regional One Health said the hospital had received nine patients related to the shooting. Four of those patients were in critical condition.

A spokesperson for the Baptist Memorial Health Care system said one person had been brought to a Baptist hospital in relation to the Collierville shooting.

Le Bonheur Children’s Hospital has no patients in the hospital from the scene and is not aware of any patients planning to arrive, spokesperson David Henson told The Commercial Appeal at 2:30pm.

A shelter-in-place on all Collierville Schools was lifted under consultation from the Collierville Police Department that the scene is secure. The schools are proceeding with normal operations of dismissal.

Glenda McDonald, who works in Kroger’s floral department, said she was not injured but was shaken.

McDonald said she walked out of the back office to the floral counter when she heard something that sounded like a gunshot.

“I just ran out the door,” McDonald said. “I left my purse, my keys, everything.”

She said she is not sure how many people were injured, but she believed she saw a bagger and some customers get shot before fleeing.

Manny Reis, 49, was driving down Poplar just as police began to arrive on the scene:

“Tons and tons of cop cars flying towards the back entrance of the Kroger on the street that runs behind it and they blocked it all off, and then they’re all opening up their trunks and grabbing shotguns. And then they all started swarming around,” Reis said.

Outside of the Kroger he said he saw someone without a shirt that was carried away by four paramedics on the scene.

“There were some people out. There was somebody without a shirt on,” Reis said. “So I don’t know if that person got injured, was shot I don’t know. I know at one point I did see them basically, like four people go over to that person and pick that person up and carry them away from that area.”

He also said that they grabbed him by each of his limbs to carry him away.

Reis said he also saw a confrontation on the roof between an officer and someone who appeared to be working on the roof of the Kroger.

“I did also see a police officer had his gun drawn on the roof to a man wearing like a safety-colored vest thing,” Reis said. “Looked like he was just an employee working or something like that. He came over to the cops with his hands up.”

“I heard that there was an active shooter and my mom works here. it’s been an hour and a half and I still don’t know where she is.”

She said her mother is not answering her cellphone.

She said her mother works in the Kroger meat department. “My mom is really kind. Everybody that works with her loves her. She’s like a mom to everyone.”