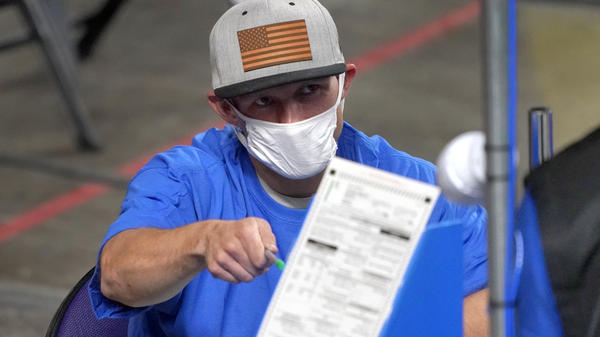 A widely discredited GOP-led review of the 2020 election in Arizona’s largest county has concluded that Joe Biden indeed received more votes there than Donald Trump.

According to a draft copy of the findings obtained by NPR member station KJZZ, a hand recount of the nearly 2.1 million ballots cast in Maricopa County hewed closely to the official canvass of the results approved by county leaders.

In fact, the new hand recount for Biden exceeded the county’s tally by 99 votes, while Trump received 261 fewer votes than the official results.

Randy Pullen, a spokesman for the election review, confirmed the validity of the draft. “It’s not the final report, but it’s close,” he said Thursday.

The draft copy was obtained by KJZZ from a source familiar with the review less than 24 hours before a scheduled presentation in the Arizona state Senate, where President Karen Fann and Sen. Warren Petersen, the Republicans who issued subpoenas that obtained the ballots and voting materials needed for the investigation, are giving the contractors they hired to conduct the review a platform to explain their findings.

Trump and his allies have latched on to the so-called Arizona audit as evidence of their wide-ranging and baseless claims that the 2020 election was rigged.

Republicans in other states have visited the election review in Maricopa County, and initiated similar investigations in their states, despite a lack of evidence of widespread fraud or other issues with last year’s election.

But the Maricopa report itself throws cold water on the grandest claims of fraud.

“What has been found is both encouraging and alarming,” the draft states. “On the positive side there were no substantial differences between the hand count of the ballots provided and the official canvass results for the county.”

Pullen confirmed that the hand recount was “relatively close” to the official tally.

“Was there massive fraud or anything? It doesn’t look like it,” he added.

However, the draft report raises concerns about the county’s elections systems and record-keeping, and accuses Maricopa County officials of stonewalling their effort to perform “a complete audit.”

“Had Maricopa County chosen to cooperate with the audit, the majority of these obstacles would have easily been overcome,” the report states.

Pullen said other reports that will be presented in detail Friday have not yet been leaked, and that “anomalies” found in voting records are vast enough to cast doubt on the final vote count — despite the hand recount’s confirmation of the result.

Maricopa County supervisors have refused to aid the contractors hired by Fann, accusing them of bias and inexperience after errant claims were made about the county’s election.

“The contractors hired by the Senate president are not auditors, and they are not certified by the U.S. Election Assistance Commission,” Maricopa County Board Chair Jack Sellers, a Republican, said in May. “It’s clearer by the day: the people hired by the Senate are in way over their heads. This is not funny; this is dangerous.”

County officials responded on Twitter to the release of the draft copy of the report, writing that while it affirmed the results, “the report is also littered with errors & faulty conclusions about how Maricopa County conducted the 2020 General Election.”

The county’s criticism of the reviewers is a sentiment shared by election experts across the country, who’ve warned that any findings by lead contractor Cyber Ninjas — a Florida-based cybersecurity firm that had no prior experience in elections and is led by a CEO who’s embraced conspiracies of election fraud — can’t be trusted. The same goes for subcontractors conducting other aspects of the Senate’s review, they say.

“This partisan effort in Arizona appears to be ending the same as it begun — highly biased, incompetent individuals running the process, delay after delay after delay, and very importantly, completely un-transparent,” David Becker, founder of the Center for Election Innovation and Research, said earlier Thursday.

In the months since the review first began in late August, contractors and Arizona state Senate Republicans have drawn the scrutiny of the U.S. Justice Department, made errant claims about illegitimate votes that were promptly debunked, and disclosed that prominent Trump supporters engaged in efforts to delegitimize the former president’s defeat provided millions of dollars to fund the process.