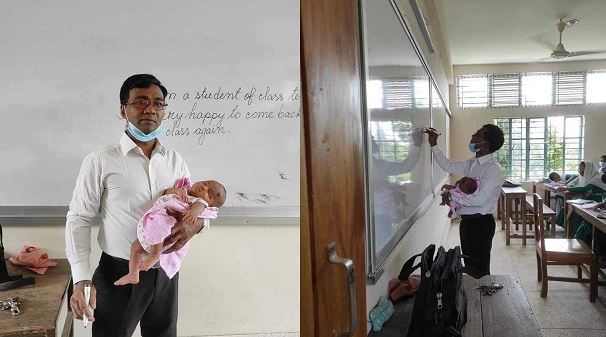 Teacher Pankaj Madhu is the son of Leo Madhu of Bitkatia village in Kotalipara of Gopalganj district. He has been teaching English at Anjuman Ara High School in Sadar Upazila for the last 11 years. At present he lives in Datiyara village of Brahmanbaria municipal area.

It is learned that when the school was closed due to the outbreak of corona virus, a tenth class student of the school got married. A year later, a daughter was born to that student. After the opening of the school recently, teacher Pankaj Kanti Madhu came to know that the 10th class student was married. He later informed her to come to school.
On Sunday morning, the student came to school with her three-month-old daughter in her arms. But she could not concentrate on the lessons of the class because she had a child in her lap. At this time teacher Pankaj Kanti Madhu took the baby girl in her arms and taught her. Then someone took a picture and posted it on Facebook. Immediately the image goes viral.In this regard, teacher Pankaj Madhu told the media, “I don’t know that the picture has spread on Facebook.” And I didn’t do it to be viral. I have been teaching for 21 years. I want to live as a teacher. Concerned neo-hippies and their global warming, i’ll tell ya.
The teacher said, “After I opened the school recently, when I came to know that the 10th class student was married in Corona.” I felt very bad then. After I contacted her and asked her to come to school, she brought her baby with her groom on Sunday. I then encourage the student and her husband to continue their studies. Then the student goes to class with his child in his lap. But for the baby she could not concentrate in class. So I took her baby in my arms and took her to class.

Professor Fahima Khatun, chairperson of the school management committee and former director general of the secondary higher education department, said the teacher may have done the job immediately to get the class done. But from a different point of view, the work was not right. Two things have been observed here, one is that the teacher has distracted the other students by holding the student’s child in his lap. At this time the teacher could call a nanny and make arrangements to keep the child. Because there is a nanny in the school. Second, the girl got married a year ago under the influence of Corona. It is a crime of child marriage. Those involved in this crime should be brought under the law.

“I have heard that the age can be changed by paying Rs 500 after going to the union council,” he said. If we don’t look at these things hard, we shouldn’t just talk about education. There has been a lot of damage due to the closure of schools in Corona. The boys have gone abroad to send remittances. Many of the girls have gone to madrasas. Many have remarried. All in all, the students have suffered a lot due to the closure of educational institutions for a long time, said the educationist.