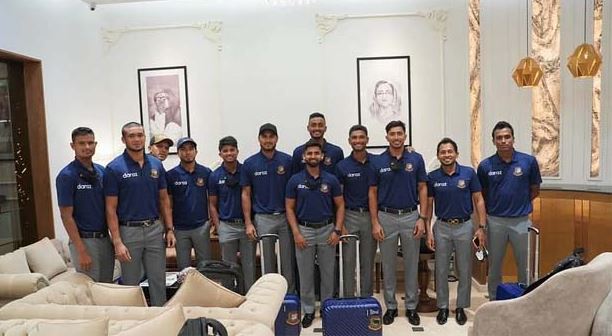 The Tigers have left the country to take part in the T20 World Cup. Mahmudullah’s forces boarded a plane bound for Oman at 12:15 pm on Sunday (October 3). It is learned that the red and green jersey holders will have to stay in the one-day quarantine in Oman on Monday (October 4).
However, before leaving the country, the drama about the Bangladesh team’s World Cup journey did not diminish. Hurricane ‘Shaheen’ has canceled all flights at Muscat Airport in Oman, creating extreme uncertainty over the Tigers’ World Cup journey. Tiger cricketers also arrived at the airport as per the pre-arranged schedule. But as the flight was canceled, they had to go back to their failed minds. Then the new drama begins!

Mahmudullah Bahini left Mirpur Cricket Academy for the airport at 7.30 pm. Once there, they can find out that the flight was delayed one day. The cricketers were then informed as soon as they left the airport that the flight would leave at the scheduled time. Unexpectedly, everyone returned to the airport. After so much drama, the Tigers finally got on the plane.

Meanwhile, before leaving the country to play in the World Cup, Tiger captain Mahmudullah told the media, “Everyone will pray for us.” If we can play as a team the way we played the last series then hopefully nothing good will happen.

“We will try to get right to the main stage in the qualifying round,” he added. There will be efforts to win as many matches as possible. Our previous record in the T20 World Cup is not good. This time there will be an attempt to set a new record.

Domingo’s side will play a match against Oman ‘A’ team on October 6 after a four-day training camp in Oman. The Bangladesh team will leave for the United Arab Emirates on October 9. There will also be a one-day room quarantine. The practice will resume from October 11.

Bangladesh will then play official warm-up matches against Sri Lanka and Ireland on October 12 and 14 in Abu Dhabi. The World Cup qualifying mission started on October 16. Bangladesh will have to face Scotland, Oman and Papua New Guinea in the first round to qualify for the Super-12.

Meanwhile, Shakib Al Hasan and Mustafizur Rahman are playing in the ongoing IPL in the United Arab Emirates, the venue of the upcoming T20 World Cup. So they have no chance of corona test. However, since both are in the IPL bio-safety zone, they will be able to join the team directly in Muscat.
Wisden calls Bangladesh ‘Dark Horse’ in this year’s World Cup. This is what the popular media has claimed by publishing a report recently. However, the media has also mentioned some reasons behind calling Bangladesh a ‘dark horse’.

Bangladesh is not yet a strong team like others in the T20 format on paper. However, the recent performance is quite promising. Starting from the Zimbabwe series, Team Bangladesh had a great performance against Australia and New Zealand at home. The Tigers have won three consecutive T20 series. Wisden India cites recent form as one of the reasons behind calling Bangladesh ‌ ‘Dark Horse’. Bangladesh has won 9 of the last 13 Twenty20 matches. And the media has the idea that this form of the Tigers will keep them ahead on the stage of the World Cup.
Bangladesh World Cup Team:
Liton Das, Shakib Al Hasan, Mushfiqur Rahim, Mahmudullah Riyadh (captain), Afif Hossain, Nurul Hasan Sohan, Mehedi Hasan, Saifuddin, Taskin Ahmed, Shariful Islam, Mostafizur Rahman, Nasum Ahmed, Naeem Sheikh, Soumya Sarkar and Shamim Patwari.