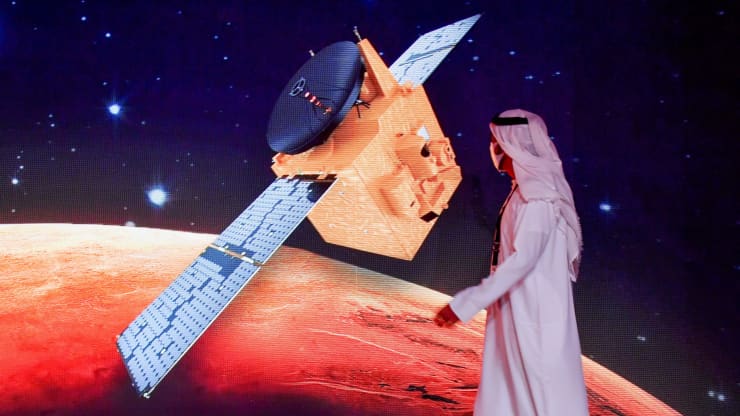 The United Arab Emirates on Tuesday announced plans to explore the planet Venus before the end of the coming decade and land on an asteroid, outlining its new ambitions months after its first mission to Mars.

The spacecraft for the mission would take seven years to build, with the launch date planned for 2028. It would orbit Venus and then Earth, using gravity assist maneuvers to reach an asteroid belt object in 2030. The vehicle would then observe seven main belt asteroids, before landing on an asteroid 560 million kilometers (347 million miles) from Earth in 2033.

Venus missions have taken place since the 1960s, with the Soviet Union, the U.S., the European Space Agency and Japan having already conducted successful orbits of the second planet from the sun.

The mission, which will be developed with the Laboratory for Atmospheric and Space Physics at the University of Colorado, Boulder, will be slated to embark on a 3.6 billion kilometer (2.2 billion miles) journey, seven times longer than that of the UAE’s Hope probe that reached Mars in February 2021. That landing made the UAE only the second country to ever successfully enter Mars’ orbit on its first try. The first was India.

The Hope probe, a $200 million project called “Al Amal” in Arabic, was launched on July 20, 2020, from Japan’s Tanegashima Space Center. The UAE’s project was six years in the making and has made the small Gulf sheikhdom only the fifth country in the world to reach Mars, and the first to do so in the Arab world.

The Emirates Mars Mission partnered with a team from the University of Colorado to build the Hope spacecraft. But the oil-rich Gulf country itself has spent years investing in space research and development, founding its own space agency in 2014 after launching satellites in 2009 and 2013 developed jointly with South Korean partners.

While it would not be the first country to conduct a mission to Venus and an asteroid landing, the UAE is known for its grand pursuits. It’s already home to the world’s tallest building, deepest dive pool, largest shopping mall, and a seemingly endless list of larger-than-life goals designed to advance its image internationally as well as boost science and technology innovation in the country of 10 million.

“We have set our eyes to the stars because our journey to development and progress has no boundaries, no borders and no limitations … With each new advancement we make in space, we create opportunities for young people here on Earth,” UAE Prime Minister and Ruler of Dubai Sheikh Mohammed bin Rashid Al Maktoum said of the plan on Tuesday.