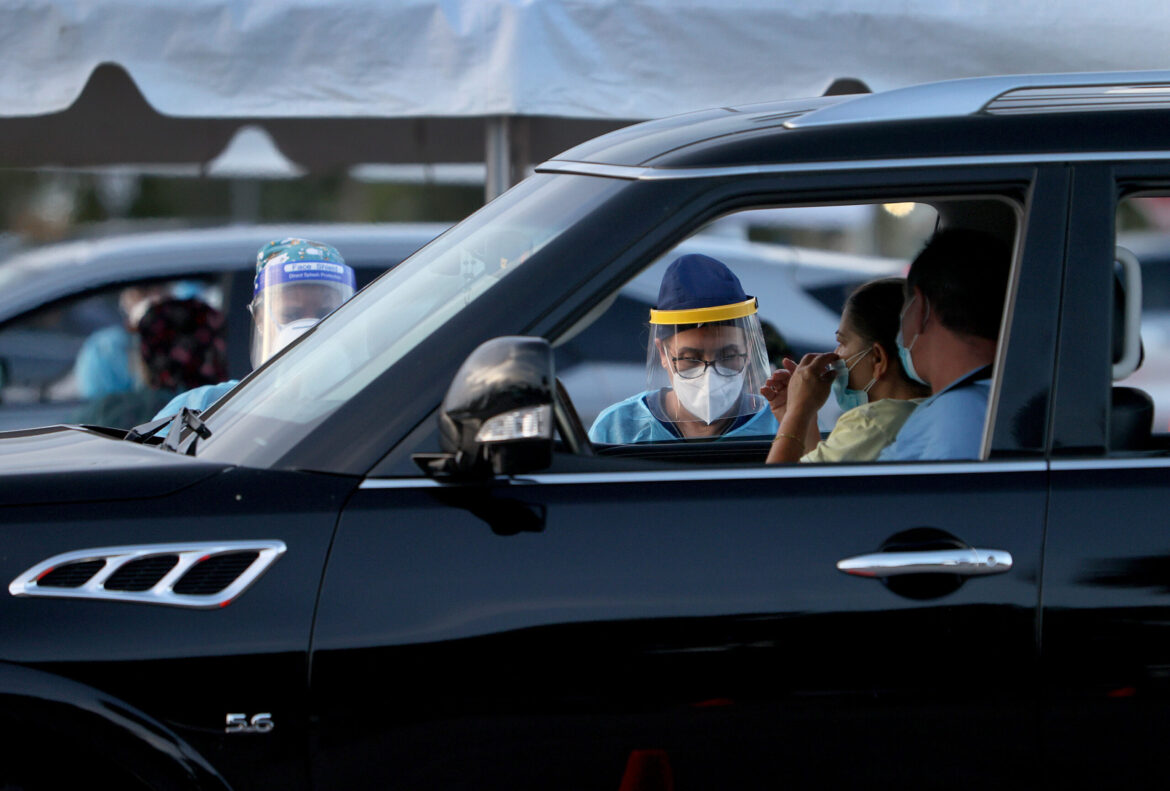 Brian Pierce, the coroner in Baldwin County, Ala., thought he had seen the last of the coronavirus months ago as the area’s death count held steady at 318 for most of the spring and summer. But then in July and August, the fatalities began mounting and last week, things got so bad, the state rolled a trailer into his parking lot as a temporary morgue.

“I think most people were thinking, ‘We’re good,’ ” he said. “Life was almost back to normal. Now, I’m telling my kids again to please stay home.”

Nationally, covid-19 deaths have climbed steadily in recent weeks, hitting a seven-day average of about 1,500 a day Thursday, after falling to the low 200s in early July — the latest handiwork of a contagious variant that has exploited the return to everyday activities by tens of millions of Americans, many of them unvaccinated. The dead include two Texas teachers at a junior high, who died last week within days of each other; a 13-year-old middle schoolboy from Georgia; and a nurse, 37, in Southern California who left behind five children, including a newborn.

What is different about this fourth pandemic wave in the United States is that the growing rates of vaccination and natural immunity have broken the relationship between infections and deaths in many areas.

The daily count of new infections is rising in almost every part of the country, according to data tracked by The Washington Post. But only some places — mostly Southern states with lower vaccination rates — are seeing a parallel surge in deaths. The seven-day average of daily deaths is about a third of what it was in January, the pandemic’s most deadly month, but it is forecast to continue rising as high numbers of patients are hospitalized.

While most regions with increasing deaths have lower vaccination rates, that isn’t the case for all of them.

Florida, for example, where more than 53 percent of the population is fully vaccinated, is the worst-hit state in terms of daily deaths, which have averaged 325 over the past week, alongside almost 20,000 new daily infections on average. Despite resistance from local school boards, Florida Gov. Ron DeSantis (R) has fought to enforce his ban on mask mandates and made good on a threat to withhold salaries from some of them this week even after a judge ruled the ban unconstitutional.

David Wesley Dowdy, an epidemiologist at the Johns Hopkins Bloomberg School of Public Health, said the situation underscores the unanswered questions about the virus 18 months out — and the limitations of mathematical forecasting to predict the daily choices of 330 million Americans.

“The driving factor in the current wave is human behavior — how people interact and how people respond to risk — and that is really very unpredictable,” he said.

“We are in a perfect storm of viral changes and behavioral changes,” agreed Lauren Ancel Meyers, director of the University of Texas COVID-19 Modeling Consortium.

Virtually every time that humans have underestimated the virus and let down their guard, deaths surged.

Deborah Birx, then the coordinator of President Donald Trump’s coronavirus task force, suggested in March 2020, that mitigation measures might keep deaths at 100,000 to 240,000 under the most optimistic scenario. But by the end of 2020, when vaccines were first authorized for emergency use, the nation had long surpassed those numbers, and forecasters predicted U.S. covid-19 deaths would top out at around 550,000.

As of Thursday, the country has logged more than 640,000 deaths — and many experts believe we are not yet at the peak.

When looking at coronavirus deaths, the United States looks like two very different countries with a mostly north-south divide.

Alabama’s top health official has warned “there is no room to put these bodies,” while a central Florida medical coalition has purchased 14 portable morgues to help manage the “unprecedented” deaths.

Florida and Louisiana are experiencing their highest pandemic deaths per capita to date, surpassing their January toll. Mississippi’s death rate is higher than those other states, although far lower than at its January peak.

Of the 14 states experiencing the worst death rates this week, only Nevada, Oregon and Wyoming are outside the South.

At the other end, many Northern and Midwestern states still have low death rates despite rising case counts, although covid-19 deaths typically lag infection reports by several weeks. The seven states averaging two or fewer daily deaths were Vermont, Alaska, Rhode Island, the Dakotas, Maine and New Hampshire, along with the District. Most have high vaccination rates, or high rates of natural immunity from earlier pandemic waves, or both.

Ali Mokdad, a researcher at the Institute for Health Metrics and Evaluation at the University of Washington whose model is considered among the more optimistic, said that at least nine states may have reached, or passed, their peak for the delta variant — Missouri, Arkansas, Louisiana, Texas, Mississippi, Alabama and Florida in the South, along with Nevada and Hawaii — but that has little to do with policy changes or other major events.

Likely it’s more about “individual caution and [delta] running out of susceptible individuals,” he and his team wrote in a recent report.

Mokdad expects that states that have done better at curbing infections will experience a longer, albeit smaller wave, while those with rampant infections might start to see case declines shortly. In total, the group projects between 116,000 to 210,000 new U.S. deaths before Dec. 1, based on delta’s continued spread, a slow but steady increase in vaccinations, and no other threatening variants emerging.

That model also assumes that 56 percent of the population is immune to delta as a result of vaccinations and infections, and that 67 percent will be immune by Dec. 1. The next three months will be rough, however, with 44 states experiencing high stress on intensive care beds, he predicted.

“It’s counterintuitive,” Mokdad said. “In order for a state to peak and come down, you need fewer people susceptible to the virus. So states like Florida that have allowed the virus to circulate may be reaching that level through vaccines, plus people being infected.”

That model forecasts that deaths may rise to a peak by mid-September and slowly decline until Dec. 1. Several other models, including one from Los Alamos National Laboratory, forecast daily deaths rising into October.

Nicholas G. Reich, a biostatistician at the University of Massachusetts at Amherst, whose group puts together an ensemble forecast based on 40 models used by the Centers for Disease Control and Prevention, predicts that weekly deaths in each of the next four weeks will be between 9,900 and 11,900.

Reich cautioned that those numbers are based on the idea that infections may be slowing in some areas. But with schools opening up, mask mandates in flux, vaccinations still underway and the impact of waning immunity still unclear, he said it’s almost impossible to forecast what will happen between now and the end of the year.

“Knowing what the decline is going to look like is a basically an impossible question at this point,” he said.
Mysteries continue

Epidemiological post-mortems are often useful at pinpointing why outbreaks played out they way they did, but experts say with the coronavirus, it’s been difficult to explain case and death curves, even in retrospect. And that’s especially so with the delta variant.

Among the first countries the new variant tore through was the United Kingdom. Cases went up sharply but the expected deaths never materialized. Scientists speculated the country’s high rate of infection and immunity due to vaccination and previous infection — estimated to be between 90 and 94 percent — were factors.

Two regions being closely watched by U.S. experts are Scotland and Israel. In Scotland, the delta variant appeared to peak in early July and then begin waning, but over the past two weeks, cases spiked again not long after schools opened. The region is one of the most highly vaccinated in the world, with 91 percent of adults having had at least one vaccine shot. Death rates remain lower than before vaccines — a sign that authorities says reconfirms the effectiveness of vaccines. Nonetheless, the country has drawn attention for the surprising number of breakthrough infections.

Israel, dubbed “the world’s real-life COVID-19 lab” by Science magazine, has seen new cases at close to peak levels, and as of mid-August, 59 percent of those hospitalized were fully vaccinated. Deaths are rising too. The government reported that more than 550 people died of covid-19 in August, versus seven in June. The country, one of the most highly vaccinated in the world with 66 percent of the population having at least one shot, in July became the first in the world to approve third jabs due to concerns about waning immunity.

Another mystery is India, where delta led to widespread chaos and death in March, but then appeared to have been contained despite few vaccinations in the country of nearly 1.4 billion. As of this week, 11 percent of the population was fully vaccinated and 38 percent had received at least one shot. On Sept. 1, the seven-day average of daily deaths was around 450, versus over 4,000 in May, according to data from Johns Hopkins University.

Meyers, the University of Texas professor, said that while delta’s spread may be playing out differently in different parts of the world, a lot of the U.S. experience reflects vaccination levels and compliance with strategies such as masking and social distancing.

That means that “today, we as individuals and communities have a lot of control in how the pandemic is playing out,” she said. “If we take precautions, we can start to curb and prevent deaths.”