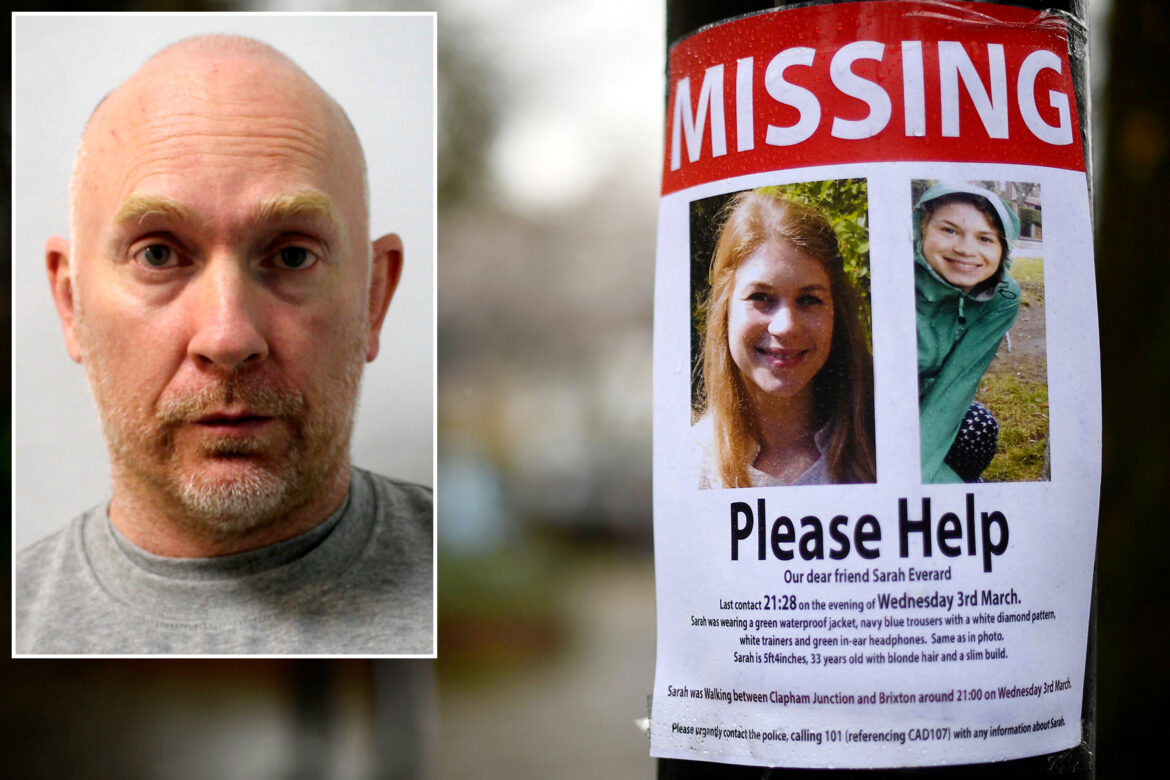 British cop Wayne Couzens was sentenced on Thursday to spend the rest of his life behind bars for raping and murdering Sarah Everard after snatching her off a London street.

Serving London officer Couzens, 48, had already pleaded guilty to murder, rape and kidnapping — and his whole-life sentence means he is never allowed to get parole.

His boss, the UK’s top cop, Cressida Dick, called it “one of the most dreadful events in the 190-year history of the Metropolitan Police Service.”

Judge Adrian Fulford said there was a “palpable need” for the officer to spend the rest of his life in prison because he’d abused his authority in order to commit crimes that were “devastating, tragic and wholly brutal.”

“Sarah Everard was a wholly blameless victim of a grotesquely executed series of offenses,” he told Couzens, a married father of two.

“The misuse of a police officer’s role such as occurred in this case in order to kidnap, rape and murder a lone victim is of equal seriousness as a murder for the purpose of advancing a political, religious ideological cause,” the judge told London’s Old Bailey.

Couzens, an armed officer with the Met police’s elite diplomatic protection unit, had worked an overnight shift protecting the US Embassy when he snatched Everard as she walked home on March 3.

He used his police warrant card to stop the 33-year-old marketing consultant on the pretext that she broke COVID-19 lockdown rules, his sentencing heard.

He handcuffed her and put her in the back of a rental car, later transferring her to his own car, where he raped and murdered her, the court heard.

Everard’s body was found in woodland in Kent, about 50 miles south of where she’d been snatched. A post-mortem concluded she had died as a result of compression of the neck, with the court hearing that he had used his police-issued belt before burning her body.

Police checked security camera footage and identified Couzens through his rental car. He was arrested at his home on March 9, just minutes after he deleted his phone data.

Couzens was sentenced after a two-day hearing in which Everard’s family confronted him with heartbreaking impact statements.

Everard’s father, Jeremy, had asked the killer, “Please will you look at me” — telling him, “No punishment that you receive will ever compare to the pain and torture that you have inflicted on us.”

Her mother, Susan, told the court that she lost her daughter for the “ridiculous reason” that “Couzens wanted to satisfy his perverted desires.”

“I am outraged that he masqueraded as a policeman in order to get what he wanted,” she said.

Fulford said the officer had spent around a month visiting London while researching how to carry out the crimes he was plotting, much of it caught on video footage.

The officer “had planned well in advance, in all its unspeakably grim detail, what was to occur,” Fulford said.

He described Everard as “an intelligent, resourceful, talented, and much-loved young woman, still in the early years of her life” — but whose final hours were “as bleak and as agonizing as it is possible to imagine.”

Couzens had “eroded confidence” in police forces and “very considerably added to the sense of insecurity that many have living in our cities, perhaps particularly women, when traveling by themselves and especially at night,” the judge said.

“You have utterly betrayed your family,” he told Couzens, saying they will now have to live with the “ignominy of your dreadful crimes.”

Couzens’ attorney, Jim Sturma, insisted that the firearms officer is “ashamed by what he has done” — and his family and friends “absolutely staggered” at his “truly horrible crime.”

“No right-minded person reading the papers or listening to the statements read out by the Everard family could feel anything other than revulsion for what he did,” the defense attorney admitted.

“He doesn’t seek to make excuses for anything he did, he is filled with self-loathing and abject shame, and he should be.”

The Metropolitan Police Force, which investigated the murder and for which Couzens worked, has also said it was “sickened, angered and devastated” by his crimes.

However, after Couzens’ arrest, it emerged that he had been accused of indecent exposure at least twice before he murdered Everard, including once in 2015, before he had joined the UK’s leading police force.

Britain’s police watchdog is looking into police failures to investigate those earlier cases.

Dick, meanwhile, called Couzens a “coward” who “brought shame on” the force with his “unthinkable and appalling” attack.

“His actions were a gross betrayal of everything policing stands for,” the commissioner said, saying she was “absolutely sickened.”

“There are no words that can fully express the fury and overwhelming sadness we all feel about what happened to Sarah. I am so sorry,” the country’s top cop said.